When your plans are delayed, anticipation skyrockets; we always want something more if we suddenly can’t have it. And so it was with my plans to watch Who as usual on Saturday night, delayed until Monday by timely connectivity issues. My hopes for this episode were already high given the ending last week – add in the postponement, and those hopes went higher still.

To get it out the way early, let me just say this: ‘The Doctor Falls’ didn’t live up to those hopes (I won’t say expectations), nor the setup given to it by ‘World Enough and Time’. Perhaps it worked for other viewers (given my contrariness on Who, it almost certainly worked for everyone else but me), but it wasn’t an effective continuation and resolution to that cliff-hanger from last week.

The central problem, however, wasn’t really that it failed to effectively continue last week’s story. The central problem is that it didn’t want to continue it. The basic elements of last episode were there – the origin of the Mondasian Cybermen, including a converted Bill, and an alliance of Missy and the Master – but those elements were reshaped to fit a different tale.

The development of Bill, and the use of the two Masters we’ll come to, but the most egregious redirection was that the origin of the Cybermen went by in a flash. Last episode ended with Bill becoming the first of the new era, ‘reborn’ to be stronger, to survive. There was real narrative weight in that, not just for Bill, but for the Cybermen as a concept. The 45 minutes of ‘World Enough and Time’ took the basic idea behind the Cybermen – of ‘upgrading’ not as something negative, violent or intrusive, but as something incredible, something to be desired – and visualised it in the perfect way. It managed to make the idea of becoming a Cyberman one the audience could almost sympathise with. No viewer would think conversion a ‘good’ idea, but it was possible to understand what was driving the surgeon who converted Bill.

Within minutes of the start of the finale though, we’d flown past the rudimentary 1966 style, all the way to the ‘military grade’ New Who redesign; the whole development cycle of the Cybermen, already over before the episode had started in earnest. At the very least, it’s a waste of the eerie 1966 design, which ‘World Enough and Time’ had gone to great lengths to make the audience scared of. But more than that, it meant that all the nuance that episode had built up went straight out the window, in favour of monkey-brained killer robots vulnerable to exploding apples. And while I usually disregard plot holes, how is it that the Doctor’s explosion, confined to a single level so it didn’t blow up Nardole and company too, was enough to defeat all the Cybermen, despite some still residing in the ‘city’ level around the Master’s TARDIS? Either the explosion hit the whole ship, in which case Nardole wouldn’t have survived, or it didn’t hit the whole ship, in which case the Cybermen are still a threat who, thanks to the time difference that the Doctor mentioned, will have had thousands of years to develop further. 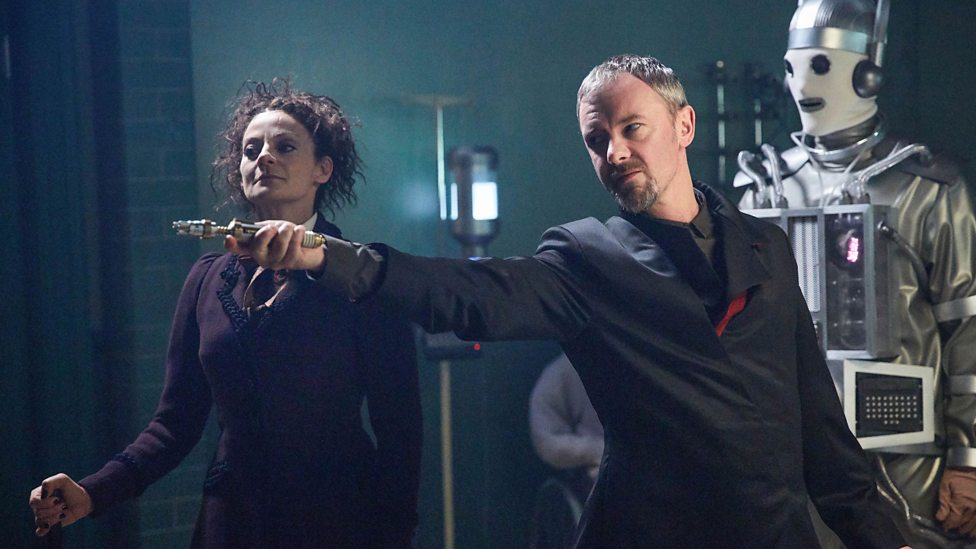 Apart from anything, what exactly is the connection to Mondas here? Perhaps, off-screen, the stragglers still in the city survive and reach the planet to eventually face the First Doctor, but why not show that on-screen? In lieu of such confirmation, it feels as if Missy’s discovery of Mondas at the end of last week was nothing more than a gimmick, extended exposition for the reveal of the old Cyberman design. The ideal version of this episode would have seen the Cybermen ‘win’, and reach Mondas to evolve as we know they do, but this stood as another example of Moffat’s impatience when it comes to sticking to the mythology.

The intriguing, or perhaps irritating, thing after ‘The Doctor Falls’ it that it feels a bit like Groundhog Day. We’ve been here, or somewhere similar before. Immediately after watching ‘The Doctor Falls’, I was suddenly compelled to revisit my review of the series 8 finale ‘Death in Heaven’ for comparison, and indeed, the similarities are there. ‘Dark Water’ setup the introduction of Missy and the return of the Cybermen brilliantly, and there were intentional echoes of the past too. Here, we obviously had the Mondas Cyberman design; in ‘Dark Water’, there was a shot-for-shot remake of the classic scene from the Second Doctor serial ‘The Invasion’ with the Cybermen outside of St. Pauls Cathedral. But in both cases – for series 8 then, and series 10 now – the potential of the setup was squandered in a finale that was too sprawling, too imprecise.

The Cybermen of ‘Death in Heaven’ were revealed to just be a gift from Missy, to be the Doctor’s personal army. Here, they at least were still ‘meant’ to be a threat, even if most of the tension had evaporated. The ‘new’ Master of each – Missy there, Simm’s Master here – was wasted too. There, she had been built up across the entire season, holding all the cards as “all the graves of Planet Earth gave birth” by the end of ‘Dark Water’, while here, he had been reintroduced to usher in the “genesis of the Cybermen”. Yet, there, she just wanted to give the Doctor his present, for whatever baffling reason was given, and Simm seemed largely to exist here to be ‘bad cop’ for Missy, to be the ‘bad angel’ on one shoulder while the Doctor was the ‘good angel’ on the other. And of course, both episodes had a main character as a ‘good Cyberman’.

Which brings us to Bill. Pearl Mackie’s performance here was once again superb, as it has been all series, as she came to terms with her conversion. But the whole ‘human mentally projects that they’re still human to avoid accepting their conversion’ idea was already done as well as it could be with the first appearance of Jenna Coleman as Oswin Oswald in ‘Asylum of the Daleks’, and generally, why couldn’t they just let Bill die? The quality of Mackie’s performance doesn’t overlook that the best ending for the character came at the end of last week, accepting the finality of her conversion. Instead, like Danny and Oswin (and Yvonne Hartman from ‘Doomsday’), she was ‘the exception to the rule’, someone so special that they can beat back their conversion to help the Doctor, and was a victim of the permanent desire of New Who to always give characters ‘neat’ endings. But, seeing a Cybermen carrying the Doctor, even if that Cyberman is Bill, just undermines the whole idea of the Cybermen as ubiquitous and hive-like. 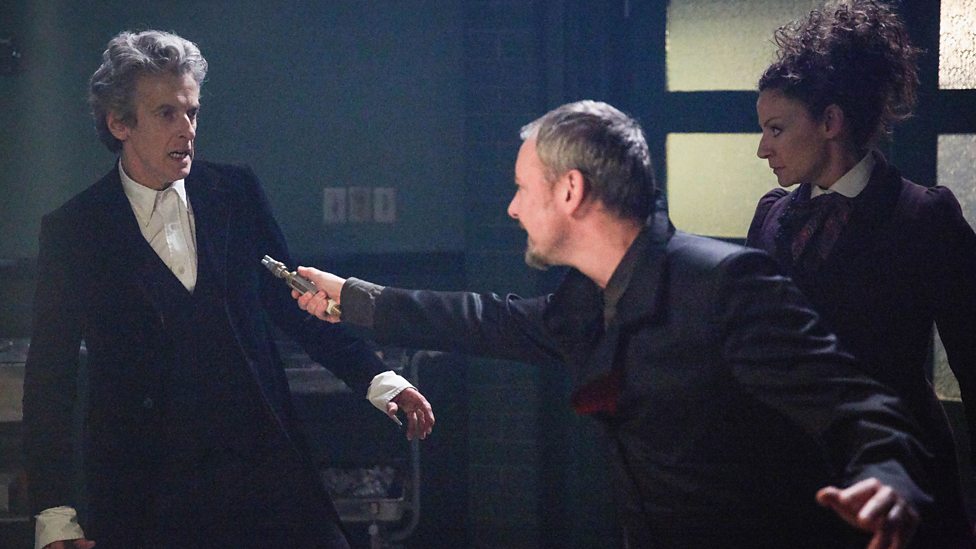 There were some positives to the episode. Nardole’s departure was slightly ‘neat’, but, potential death by explosion aside, worked well. Matt Lucas sold the conflict of emotions for Nardole; his sadness to leave the Doctor, and to not stand and fight, but his acceptance of the value of his role watching over the community on the new farm. Someone needed to go with him, and the Doctor’s explanation for why it should be Nardole reinforced a reality that actually made sense. Thankfully this time, unlike in ‘Eaters of Light’, no one stopped the Doctor – the quasi-immortal Doctor – sacrificing himself. The visuals were once again superb, and despite the issues with why he was there, Simm’s Master and Michelle Gomez’s Missy made for a predictably great pairing.

With the Doctor suppressing his need to regenerate, we turn now to the Christmas Special, nearly six months away. As rumoured, Capaldi will be joined by the First Doctor, as played by David Bradley in place of the long-deceased William Hartnell, at a time where both are trying to avoid regenerating. So much of the episode will presumably be a kind of Time Lord support group, with the two helping each other to go through the process, but beyond that, who knows. Perhaps it will just be 60 minutes of Capaldi and Bradley talking in a snowstorm. I doubt it, but wouldn’t that be great?

There’ll be more about series 10 to come in the series review itself, but overall, ‘The Doctor Falls’ tried to do too much, where it would have succeeded by just concluding an already promising setup. With Moffat only having that Christmas Special left before Chris Chibnall takes over, perhaps that cycle might change soon enough.