When your entire season revolves around your hero being his own worst enemy, it is only natural, and a little bit obvious, to have your hero be the big bad. Yes, Barry Allen (Grant Gustin) is Savitar… kinda. ‘Cause and Effect’ quickly establishes that Savitar is a time remnant, something in The Flash’s lore that is basically a knock-off Chanel bag you buy from a Venetian street vendor. To those not in the know, it’s the same thing even though it is a fake. You can’t help feeling like this facet of the reveal cheapens the storytelling; how much more interesting would it be to see Barry grapple with his future self’s actions, to see how our do-gooder fell so far than watch a copy tell us he felt left out?

Anyway, once all is revealed, Team Flash brainstorm solutions to the problem, deciding to stop Barry from developing new memories. As Cisco (Carlos Valdes) explains, Savitar’s existence is determined by a loop, what happens to Barry influences what happens to Savitar; if Barry gets punched, Savitar gets the bruise. Naturally, it all goes wrong and Barry forgets everything.

It’s weird holding an amnesia episode this close to the endgame. Even though HR’s B-plot feels tangential, ‘Cause and Effect’ is delightful as it pauses the overarching narrative to deliver one of The Flash’s more emotionally attuned episodes, one that explores how our memories shape who we are. Humans change over time because individual experiences impact us. 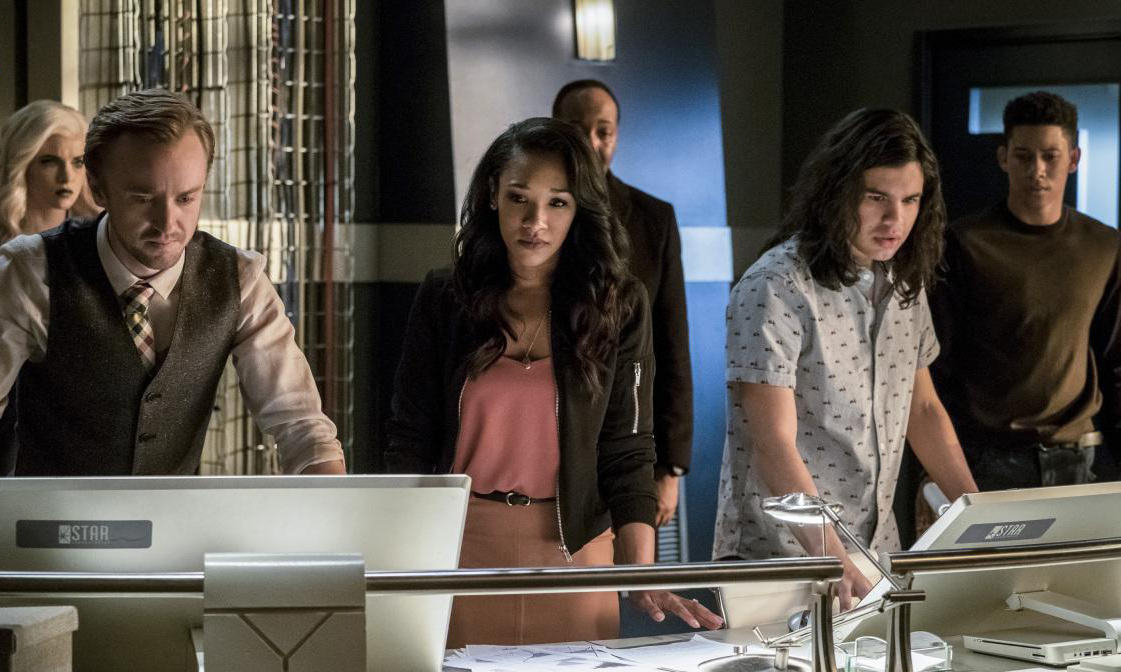 As Barry becomes ‘Bart’, in a nice reference to Barry and Iris’s comic book grandson, he becomes more peppy and goofy as he is unburdened by the memories of his parents’ murders. Candice Patton plays Iris’s arc with aplomb as she gradually realises why she loves Barry. The actor has always been in the show’s emotional core and she does most of the heavy lifting here whilst everyone else gets to quip away.

The storyline can’t help being a meta-metaphor for the show as a whole. Sure, Bart’s pep mirrors season one’s tone, but the characters experiencing the events surrounding Reverse-Flash, Zoom and Savitar have changed them into world-weary warriors. The storyline feels like a defence for the show The Flash has turned into.

So it’s a shame the writers contradict this argument by making Bart such a blast. Gustin essentially plays three characters this week, switching between Barry, Bart and Savitar. As Savitar, he elongates his vowels and dresses in black because he’s the bad guy. He only appears briefly, making it hard to develop an impression of Savitar when he’s out of the suit. Bart, on the other hand, stays around for most of the episode with Gustin giving a great comedic performance. Whether it’s Bart’s gawky nature and enthusiasm or Cisco (Carlos Valdes) and Julian (Tom Felton) delivering sarcastic asides, ‘Cause and Effect’ is filled with laugh-out-loud moments. The Flash hasn’t been this fun for a while.

The episode is also nostalgic for what has come before as Caitlin (Danielle Panabaker) returns to help the team in her Killer Frost guise. The show uses Cisco’s nostalgic memories of working with Caitlin to develop a then-and-now conflict between the duo. Valdes and Panabaker bicker with each other well, proving The Flash is at its best when it prioritises character over plot. However, as Killer Frost makes clear, even if Caitlin defeats her alter ego, there is no going back to the way things were.