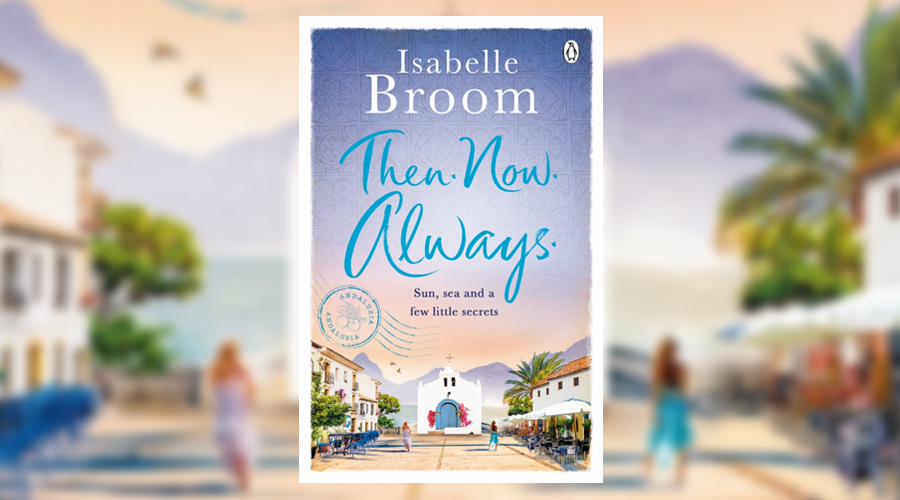 There’s no two ways about it: Isabelle Broom knows how to craft a story. Now on her third novel, Broom has proven herself to have a real skill for invoking a sense of place, to the point where the setting becomes as much a character in the book as the people are, and in Then. Now. Always, Broom takes those skills and uses them to weave a magical, romantic story about love past and present, all set within the beautiful cobbled streets of Mojácar on the Spanish Andalusian coast.

Mojácar and the legend of the Indalo Man, the prehistoric magical symbol found in the area that doubles as a lucky charm, have held a special place in Hannah’s heart since she first came across them as a teenager, so when her company is looking for a subject for a new travel documentary, Hannah is all too happy to offer up the city and share its magic with the world. And if she gets to go to Spain for a month to film it with her best friend Tom and her longterm crush Theo, who also happens to be her boss, then that’s just a happy little bonus.

As filming on the travelogue gets under way, Hannah gives herself over to the magic of Mojácar once again, allowing herself to embrace the adventure of being in the town now, ten years later. With a revitalised sense of excitement, Hannah sets out to have a perfect summer, but when her half-sister Nancy turns up, unannounced and uninvited, she threatens to disrupt Hannah’s life completely once again and those hazy summer days that were once so full of opportunity soon threaten to boil over with years of unresolved tension, for better or for worse.

With Then. Now. Always, Broom has continued with the style readers have come to expect, creating eminently likeable lead characters and delving deep into the nuances of their relationships while at the same time playing off the mythicism of Mojácar to make her latest novel completely different to the others. As this novel begins, Hannah has a lot of growing up to do, and the vividly real portrayal of Mojácar, complete with its sweltering summer heat and fully realised locals, mixed with the healthy dose of history that’s wonderfully brought back to life through the characters we meet, proves the ideal setting for Hannah to get back in touch with who she was to figure out who she wants to be.

“Then again, Mojácar has a knack of doing that, of dusting those who discover it with its bewitching sense of mysticism and beauty. There has always been magic here, and now, finally, I have seen it in action.”

But as strong a presence as place is in this novel, Then. Now. Always is sold on its characters who are presented here in all their flawed, childish, naïve, selfish, jealous, insecure, loyal, capable glory. Through Hannah’s eyes we see her attention-seeking, drama queen half-sister, Nancy, and we see her boss Theo as a self-assured (if frustratingly aloof), attractive Greek man. But the beauty of Hannah’s changing perspective is that by the end of the novel we see these characters with a bit more nuance and with a greater understanding – and it’s a testament to Broom’s writing that she can take you exactly where you’re expecting to go and still manage to expertly subvert your expectations when you get there.

Then. Now. Always is an enchanting gem of a novel, and a heartwarming and life-affirming story of a 28-year-old woman who needs to find her way again. At a fairly substantial 400 pages, it’s not a short read, but it is one you can breeze through in a day or two as Hannah’s narrative soon sweeps you up into her life, and the novel quickly draws you in to its wanderlust-inducing world.