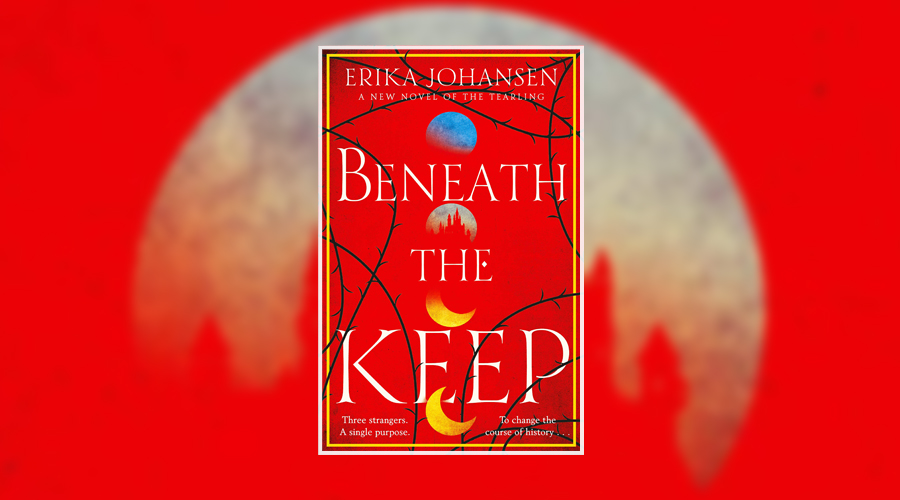 When Erika Johansen’s debut fantasy novel The Queen of the Tearling was published back in 2014, I was instantly captivated by her tale of an idealistic monarch trying to rectify the errors made by her predecessors. It became one of my favourite high fantasy books, a ranking that more than held when the sequel was published the following year. However, whilst the third book, The Fate of the Tearling, started off strong, it ended less with a bang and more with a disappointing splutter, causing even the most devoted readers to question their loyalty to the series. After such an unsatisfying conclusion, a fourth book – and a prequel at that – was a bit of a risk. Yet it’s a risk that, for the most part, pays off, with Johansen circling back to what she was always so good at: dark magic, epic power struggles and loveable characters with questionable morals.

Being a prequel, Beneath the Keep takes readers back to a time before the original trilogy’s protagonist, Kelsea, was even born. The always-precarious world of the Tearling is in a state of increasing chaos, having reverted to feudalism – a far cry from the utopia it was founded to be. With the gap between rich and poor widening, famine and drought threaten the kingdom, sparking unrest amongst the deprived civilians who’ve grown tired of being mistreated by the lords and ladies who languish in luxury and stockpile supplies, whilst their workers suffer and die. They’re buoyed by rumours of a prophecy sweeping across the land; whispers of a True Queen who will rise up and save them all. Could Elyssa – the crown princess – be the saviour the rebellion are searching for?

Away from the Keep, a young farm girl called Aislinn has become the unwitting and unlikely leader of her own uprising after taking a stand against her employer. Meanwhile, in the clandestine underworld known as the Creche, Lazarus – a man sold as a child and raised to be a killer – begins to wonder if there might be a better life for him above ground. These characters come from underprivileged, lowly beginnings but their fates are just as important as the heir to the throne. Individually, their paths will lead them both to the Keep, where the fight for a better world is – as the trilogy that came before it can attest to – only just beginning.

“It was like something from a fairy tale, but not the pretty kind that Elyssa had enjoyed as a child. She felt as though she had stumbled into Lady Glynn’s old book of Grimm, where fair faces hid cold intentions and queens were always demanding someone’s cut out heart.”

If you’re reading Beneath the Keep as a standalone novel, without any previous knowledge of the Tearling world, you’re likely to be overwhelmed by the jumping around between characters and locations. Narratively, it’s all over the place – as chaotic as the state of the kingdom itself. The perspective shifts from Princess Elyssa to Christian, aka Lazarus, aka Mace (original book readers will know who I’m talking about), to Aislinn, to a maid-cum-spy with ulterior motives, to a malevolent seer/witch, to other members of the royal guard and the various other heroes and villains of the tale. If you feel perplexed just reading about all the different perspectives that the book moves between, imagine how confused you’ll feel when you actually read it.

Beneath the Keep really is a novel for hardcore fans of Johansen’s previous books. For starters, we’re already familiar with Princess Elyssa’s legacy. We know her as a vain queen but here she’s still a young heir, and Johansen paints her in a very different, much more sympathetic light. In many ways she’s a victim, which doesn’t gel with how she’s later portrayed, but the backstory into how her character changes so immensely is welcome. We also know exactly who Lazarus eventually becomes and how crucial he is to the continuing story. As an already established character, and one with clear scruples (ironic, given he’s a cold-blooded killer from the off), it’s Lazarus who ultimately holds Beneath the Keep together. Mace was always such a mystery in the original trilogy and discovering his origins helps to explain not just his nickname but why he’s such a stoical and imposing character later down the line.

Johansen’s books have always been concerned with injustice and the imbalance between rich and poor. Beneath the Keep continues the complex themes of religion, corruption, utopian thinking, fascism, violence and abuse against the most vulnerable. It’s all written against an epic fantasy backdrop but Johansen’s beliefs and scathing perspective on certain aspects of our own society are clear as day. It adds a greater weight to the story and a higher cost to the characters if they don’t succeed in their missions. As with so many high-fantasy books, Beneath the Keep struggles to maintain a consistent pace and give each of the characters room to breathe. Some, like Lazarus, shine from beginning to end, whilst others, like Aislinn and Elyssa, fizzle out towards the end. But the final chapter, which shows how Mace and Kelsea’s fates became entwined, is a bittersweet reminder of everything that comes next – and it really did make me want to read the books all over again.

A prequel book wasn’t exactly needed but for those of us who enjoyed the original trilogy, the constant shifting of focus is worth it for the sheer pleasure of being back in the company of the handful of characters – chiefly Mace and the Queen’s Guard – we came to know and love across the Tearling books. Now what would be even more welcome is another sequel to rectify the polarising conclusion in book #3. In the acknowledgements, Johansen alludes to another novel – which will potentially bridge the gap between Elyssa’s reign and Kelsea’s – so there’s still more for readers to look forward to as the Tearling series expands and continues.