The Edge of Seventeen Review

It’s been two and a half years since Erika Johansen’s The Queen of the Tearling hit bookshelves and it very quickly became not only my favourite book of 2014, but also one of my favourite fantasy books ever. The second book, The Invasion of the Tearling, was released in December 2015, and it was equally as engaging, adding in a surprising sci-fi edge to the epic tale. Now the long wait for the third and final book is over and it’s so good to be back in Johansen’s brutal and brilliant world.

The Fate of the Tearling picks up almost where Invasion ended, as Queen Kelsea is beaten and carted off in a wagon to Demesne, having handed herself over to the Red Queen in return for her Kingdom’s safety. But if Kelsea – and indeed everyone reading these books – thought that the Red Queen was the eternal threat of this series, Fate soon reveals its trump card; the Red Queen and Kelsea are in as much trouble as each other, both hunted by a much more dangerous monster: The Orphan.

It takes less than a chapter to become re-emerged in the Tearling world, such is Johansen’s gift for immersing readers in her characters’ plights. Kelsea might be sitting in a dank cell, trying to piece together the past so she can save the future, but the rest of her comrades haven’t fared much better since she bamboozled them on the bridge at the end of Invasion. Mace is now the unwilling Regent, trying to rule the Kingdom whilst – true to form – refusing to actually sit on the throne; the Queen’s Guard has been left without an actual Queen to guard, Father Tyler is still missing and, worse, hunted, and the Church’s inevitable attack is looming. The Tearling books have always presented a bleak world, but Fate holds an overwhelming sense of doom.

“She wondered whether she had nearly gone mad, whether she would even have noticed if she had crossed the border and sunk into insanity. Maybe it would only have seemed like the next phase.”

The time-travelling sci-fi element of the last book carries across into Fate as it explores yet another timeline – the aftermath of William Tear crossing over into the new world. Here we’re introduced to a young girl called Katie, whose childhood friends are Row Finn (otherwise known as the dark one), Gavin Murphy (the Fetch) and Jonathan Tear. The story sporadically switches back to Katie’s timeline, exploring how William Tear’s vision of utopia failed with calamitous consequences. Perhaps more pressing for those who love the Fetch, is the build up to the reveal of how Row and Gavin – once friends – became immortal foes.

In Johansen’s trilogy the past, present and future have always been explicitly linked, despite the origin of those links remaining a mystery for much of the first two books. Fate’s climax rewardingly provides plenty of answers but, in doing so, there’s a strange shift in tone that doesn’t always work in the book’s favour. The Game of Thrones style epic frequently segues into a vampire horror that then paves the way for a cautionary butterfly effect tale. It just about works, due to Johansen’s vivid and confident writing, but as the novel’s denouement nears, the author seems to jump ship – going with what feels like the easiest and most convenient way of concluding the story. And it’s not a satisfying one.

Johansen has never been a writer to go with an easy option. Her characters are flawed and they make horrible, life-ruining mistakes. The world Kelsea and her people live in is built on their ancestor’s blunders and they suffer because of it. Here, the readers suffer because of an ending that neatly wraps up the tale without giving any of the characters – least of all Kelsea – any real closure. As a result, The Fate of the Tearling ends with not a feeling of fulfilment, but one that demands a fourth book (which I’d never object to). This disappointing ending is all the worse because the rest of the book is so fantastic. The characters deserved more. We readers deserved more. And, as a fan of these books, it’s tough to admit that. 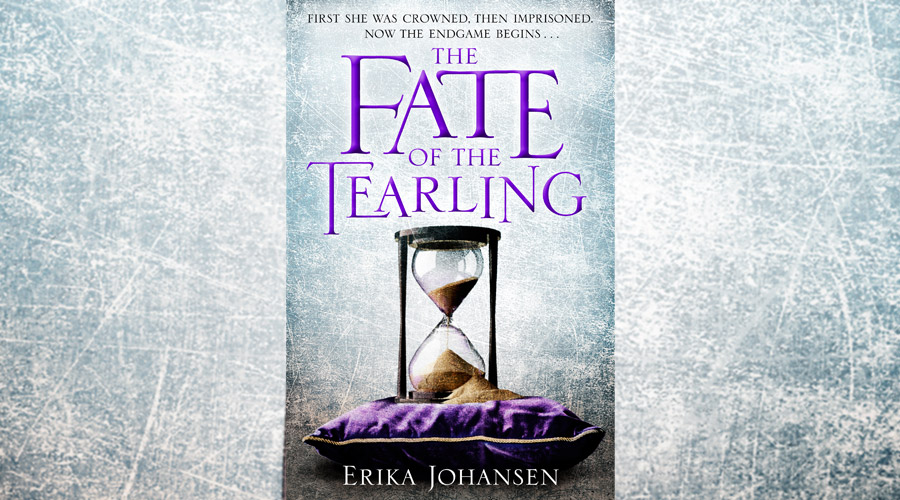 Even with an unsatisfying end, The Fate of the Tearling is still an engaging and fast-paced novel, filled with danger and adventure. It’s always fun to be with Kelsea and her Queen’s Guard (particularly Pen and the Mace, who always warrant a mention), even if they fall somewhat by the wayside to allow the characters in the past timeline to breathe. Johansen also has a talent for making villainous characters loveable; the Red Queen for example, so wonderfully wicked in the past two books, draws nothing but empathy here. And Row Finn, despite being the ultimate evil, maintains that glimmer of delightfully boyish mischievousness that draws the reader to him as much as it does the characters in the book.

After three decent-sized novels, it still feels too soon to turn the last page of Erika Johansen’s captivating trilogy. She’s not afraid of tackling weighty issues like religion, utopian thinking, monocracy, violence and corruption, and it’s that fearlessness that makes these books so compelling. The Fate of the Tearling concludes what has become a must-read, must-revisit series for all fantasy lovers – even if it doesn’t deliver the conclusion every reader wants.

The Edge of Seventeen Review

The Invasion Of The Tearling – Erika Johansen Review