Doctor Who Christmas Special 2016: The Return of Doctor Mysterio Review

Since the series of ‘Specials’ that brought an end to David Tennant’s run in the TARDIS back in 2009-10, Doctor Who has been more and more inconsistent in terms of how many episodes we get each year, and indeed when we get them. Matt Smith’s first series followed the then-familiar system of thirteen episodes from April to June, but then the show started to introduce American style Part 1 and Part 2 series, then it started moving later into the year, until now, when the last episode before this year’s Christmas Special, was last year’s Christmas Special, exactly one year ago. While the Christmas episodes air without fail, this year’s takes on a new importance given it’s bringing us back into the show’s world after a pretty long time.

But it feels like Steven Moffat knew that when he wrote the episode. Unlike the standard technique of his tenure running the show – to bulldoze previous mythology just so each current storyline fits – The Return of Doctor Mysterio has a far defter touch to it, other than the really meta title, that is. Last time we saw The Doctor, he was about to go on a twenty-four-year last date with River Song on Darillium, and lo and behold, we revisit him twenty-four years later. With River gone for good, The Doctor certainly seems wearier, but it feels like there’s more to the gap that we don’t know.

Nardole’s presence, while at first, confusing, is explained simply enough: the Doctor got lonely, and reassembled him (I’m sure the production costs of using that massive mechanical body has nothing to do with that assembly). But if this is twenty-four years later, then we’re picking up right after the date has ended, only, this doesn’t feel like The Doctor still coming to terms with River’s loss, but rather like The Doctor coming to terms with the extended period after that loss where she still hasn’t come back. After all, the whole niche of River on the show, like it or not, has been the spontaneity afforded to her thanks to her unique situation, so he’s gone vast swathes of time without seeing her before, yet this time, it must be nagging him that it really is for good. Whether something else happened or not, the theme of the Doctor moving on played a big part in the episode, and will likely spill over into next series too.

So, after all that, we get to the important bit: the episode itself. Perhaps the best possible thing to say about it is that it’s far, far better than it sounds. A Doctor Who Christmas parody of superhero comics, penned by Moffat sounds like close enough to a nightmare version of the show, and the preview scene that surfaced a few months back, where The Ghost bursts through the windows, only served to reinforce those worries. 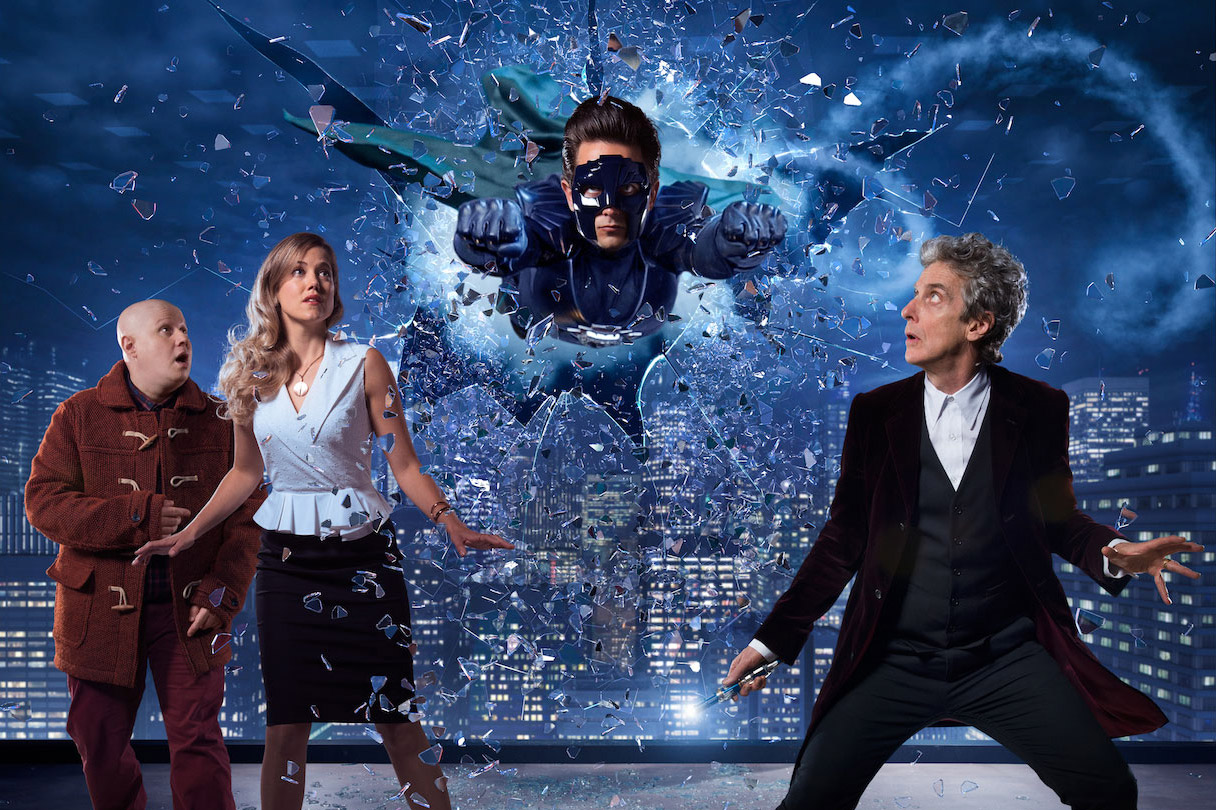 But the satire was sharp enough, as the show embraced the silliness of the deluge of references and winks to the camera: the glasses, the journalist and love interest with the initials LL (if you take her married name, that is), the high-school crush turned awkward friend zone and the frantic double life, plus more. It ended up as much a satire of superhero satires like Kick-Ass or Super as a satire of the superhero genre itself. Justin Chatwin and Charity Wakefield both seemed to be enjoying themselves as the resident hero Grant, aka ‘The Ghost’, and the resident reporter, Lucy, aka ‘Miss Lombard’, and injected some much-needed energy into their characters, both of whom lacked much depth. Though given they are basically one-off characters for the show, that shallow nature isn’t particularly surprising, and the dialogue given to each was smart enough.

However, the villainy of the episode was rather too hollow. The ‘brains’ (for want of a better name than the Harmony Shoal, which just sounds like an aquarium) were menacing enough – with an array of well-realised aspects, from the literally head-splitting storage space to ‘the brains have eyes’ – but their plan was odd even by Doctor Who at Christmas standards, and all they had for characterisation was the plan. Despite being a species seemingly dedicated to the sole pursuit of planetary colonisation, it all seemed a bit low-fi. Do they establish a multinational front corporation and then crash a Trojan Horse spaceship into a non-capital city on every planet they conquer, or just Earth?

And why exactly was it not ‘the right time’? Whatever excuse was given would always have been tenuous, but they didn’t actually bother to give an excuse. It just wasn’t the right time, so the plan was foiled by The Doctor starting it too early. If they had been a bit like Predator, doing it for the sport, and taking their time about it as a result, then fine, but it was made quite clear throughout the episode that the brains were all about getting things done as quickly as possible. As a vehicle for the episode, the plan worked well enough, providing enough tension and a problem that the Doctor actually had to call for help to stop, but as character detail, it was paper-thin.

In spite of this, it did end up being a pretty enjoyable episode, though how much of that was reliant on the viewer being a comic book fan is up for debate. In any case, welcome back Doctor Who! The focus now turns, as it always does with these Christmas episodes, to the main entertainment: next series. To that effect, the trailer at the end also introduced the other companion for the foreseeable future: Pearl Mackie’s ‘Bill’. A new main character always means some interesting adjustment themed early episodes, but aside from that guarantee, it’s not yet clear why we also need Nardole, given they both seem to have the exact same ‘say what you see’ mannerisms. One character like that is irritating enough – as was evident here despite Matt Lucas’ natural comic timing – so either the two of them balance each other out and provide a dual foil to The Doctor, or heads will be banging walls across the country every Saturday. We’ll find out in April.