It’s been a great, strange year for TV amid a pandemic. Despite the shut-down for many shows, we’ve still been able to while away the endless evenings, hours of banana bread making and lockdowns with the best that streaming and live TV has to offer. From reality TV, British dramas and Canadian comedies, to comic book and fantasy series, intense dramas and lighthearted teen shows, this year had it all.

We’ve compiled a few of our favourite watches from 2020. Take a look… 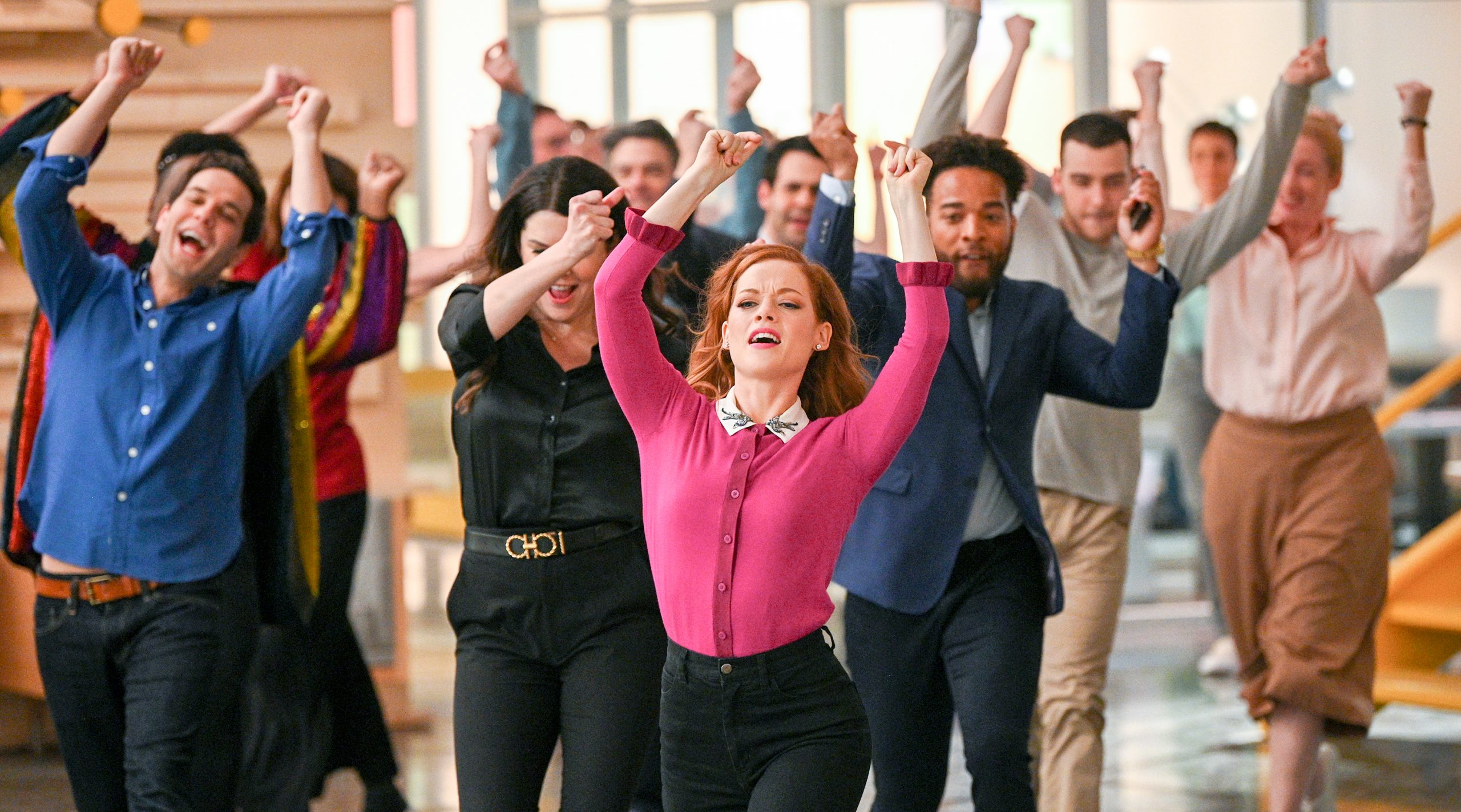 Musical comedy-dramas are growing in number, yet Zoey’s Extraordinary Playlist manages to rise to the top as one of the best. When an earthquake during her MRI scan somehow leads to Zoey gaining the ability to hear people’s inner thoughts as (existing) songs, she gets a glimpse into the uplifting, funny, personal and painful lives of those around her. While this might sound completely ridiculous – which it is – the series manages to ground the big musical numbers with real consequences to Zoey’s insights and a profound emotional core. For example, while she can hear tech-bros praising themselves with DJ Kaled’s All I Do Is Win and confessions of love with the Jonas Brother’s Sucker, she also gets to hear her father, who is unable to speak due to a degenerative disease, comfort her with Cyndi Lauper’s True Colors. If you need more convincing, Zoey is flanked by neighbour Mo (Alex Newell), boss Joan (Lauren Graham) and best friend Max (Sylar Astin) – who are just as entertaining as the show’s title character. – Nick Gomez

Anne With An E 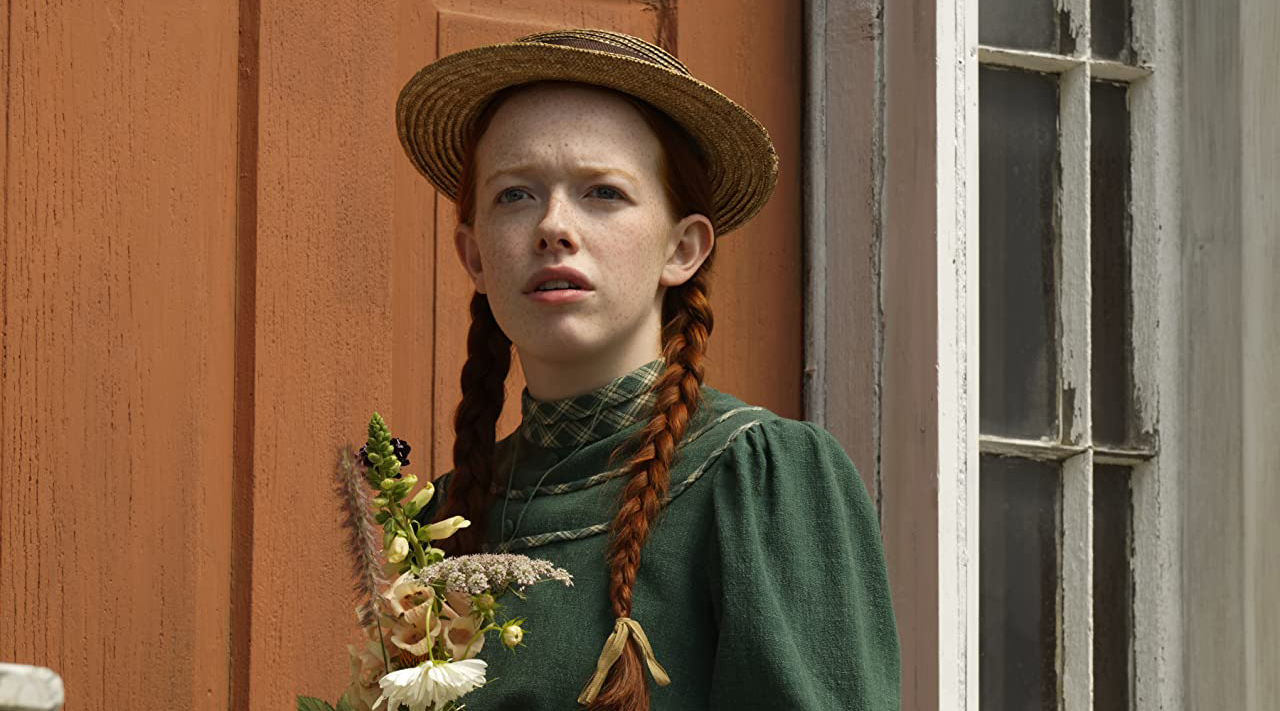 In a year that’s both flown past and felt hideously long, it’s easy to forget the TV shows that aired back in January. Yet one show that still sticks in the memory almost 12 months after it aired its final episode is Anne With An E – the Canadian TV adaptation of L. M. Montgomery’s classic children’s book, Anne of Green Gables. Wonderfully evocative, with good old-fashioned family values, typical struggles of the time (it’s set in the late 1800s) and a spirited, strong-willed and nature-loving heroine at it’s heart, AWAE is the kind of TV show that leaves your heart feeling warmer after each episode. It will be sadly missed. – Natalie Xenos 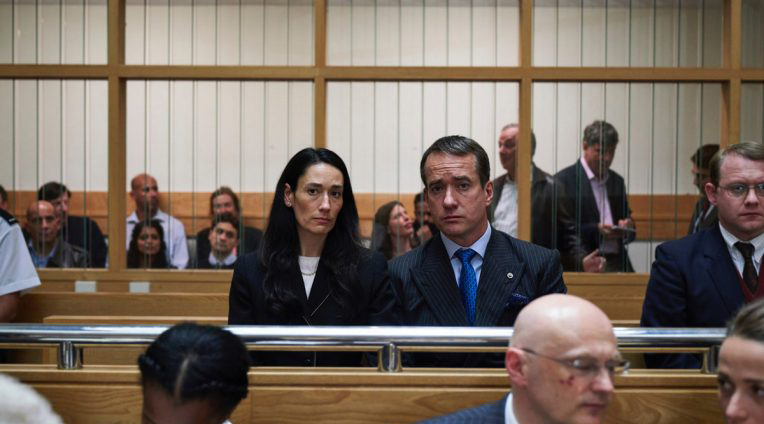 ITV’s Quiz is a programme that came along at exactly the right moment this year, helping to break up the early weeks of the UK’s national lockdown with a brilliant and well-acted dramatisation of a TV cheating scandal that had gripped the nation 20 years earlier. Over the course of three nights, Quiz provided viewers with a perfect dose of escapism, combining sharp writing and pitch-perfect casting to create a wonderfully entertaining production documenting the 2001 Who Wants to be a Millionaire? cheating scandal – all brought together by the talents of a stellar main cast, including Good Omens star Michael Sheen as an uncanny Chris Tarrant and Matthew Macfadyen and Sian Clifford as Charles and Diana Ingram. With the question of whether or not the Ingrams actually cheated during their time on the quiz show underscoring every episode (the real-life Ingrams maintain their innocence to this day), Quiz quickly becomes a tense, twisty and altogether compelling limited series that brought a scandal back to life and ensured the story was every bit as captivating as it was the first time around. – Megan Davies 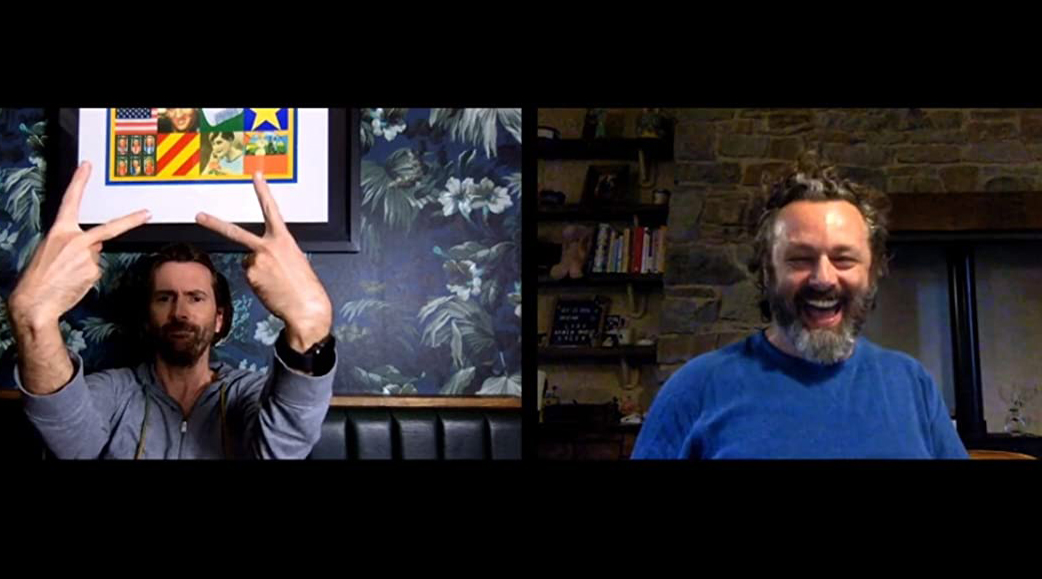 The best TV programme to come out of lockdown number one was Staged, a BBC sitcom which sees Michael Sheen and David Tennant – playing themselves – rehearsing over Zoom for a play they are planning to stage as soon as the pandemic permits. Or trying to, at least. In actuality, the episodes mostly focus on the two friends bantering about everything under the sun (although primarily who will get first-billing on the play’s promotional materials), whilst swapping notes on how they are coping in this strange new reality. Tea-spittingly funny and often surprisingly emotional, the innovative show has a second series coming soon. – Chloe Walker 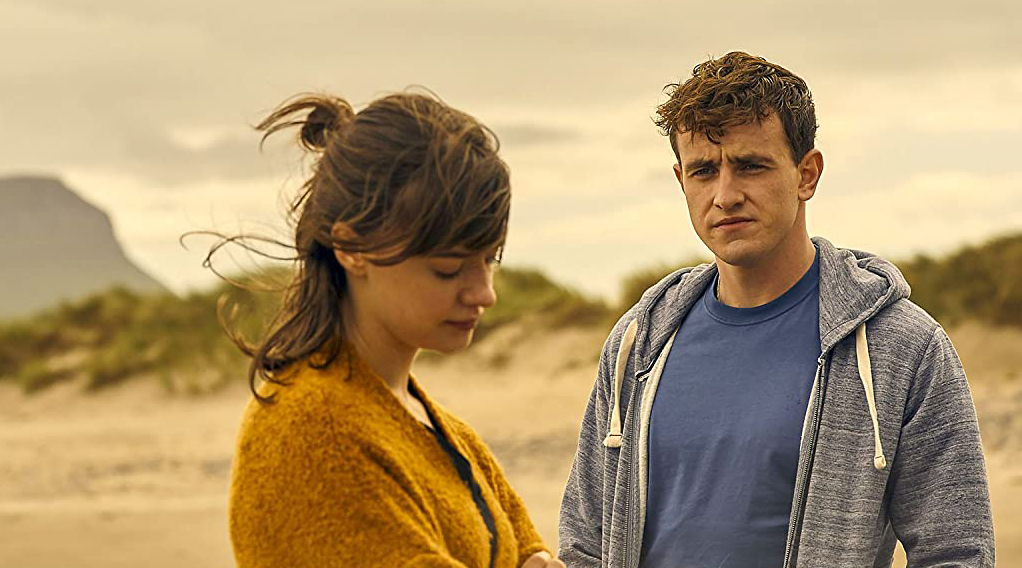 For a story so unaffected and so frank in its narrative style, the adaptation of Normal People is as devastating as it is frustrating, a feat of authenticity and nuance in portraying adolescence that’s so true-to-life that you feel every glance, every faltering ‘I love you’, and every note of Yazoo’s ‘Only You’ as it plays over the final scene of episode three. Following two Irish students as they fall in and out of love, the writers, directors and actors focus on depicting the experience of sex, isolation, grieving, and longing with a weight and fragility that’s not afforded to stories of adolescence very often, and all with a soundtrack that echoes every scene to devastating effect. To echo Yazoo again, ‘it’s like a story of love’, and like all love stories, it’ll leave you feeling fragile, and yet so grateful for the love you gave, and that it gave you. – Leah Tozer 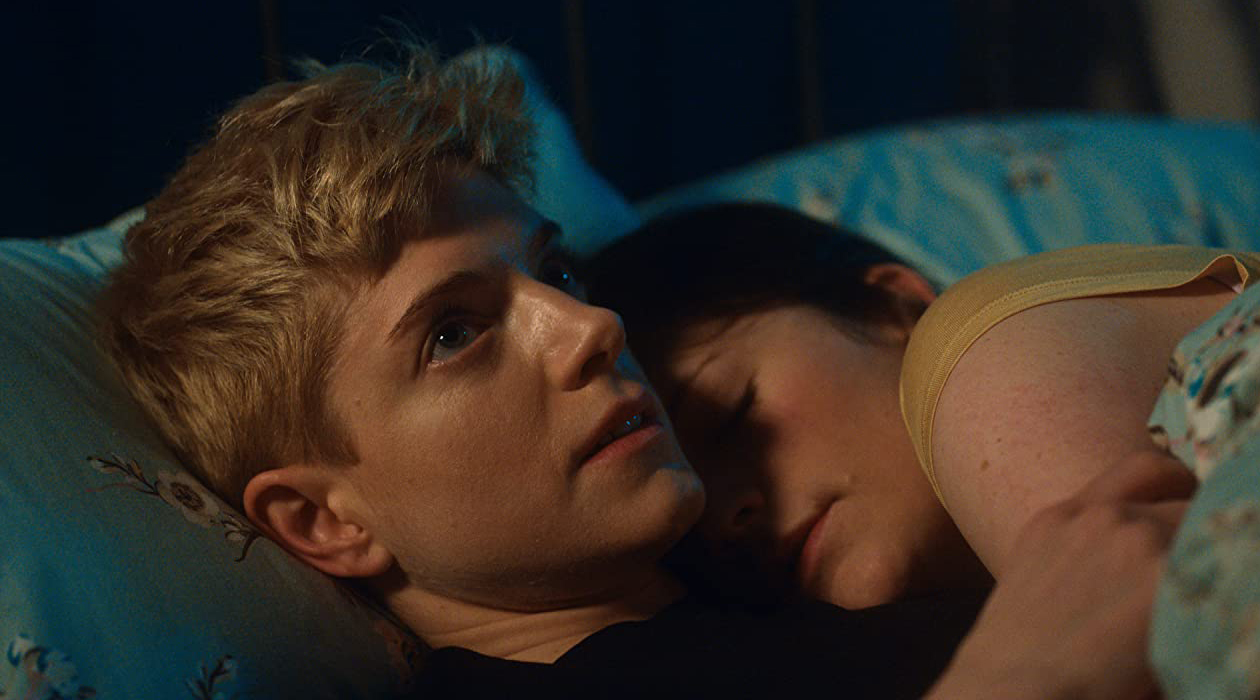 Mae Martin’s Feel Good will make you laugh, choke up, gasp and giggle. Co-created with Joe Hampson, Mae Martin stars as a character also called Mae, a persona who shares much with it’s creator: being Canadian, a standup, a recovering addict. This show combines the sharp and weird wit of Martin with the intimate, flawed and frank story of Mae finding and negotiating a loving relationship with George, played by Charlotte Ritchie (Fresh Meat, Call the Midwife, Ghosts). There are only 6 episodes of this series, which makes it easy to devour, but it leaves a lasting impression of it’s brilliance… – Nick Gomez 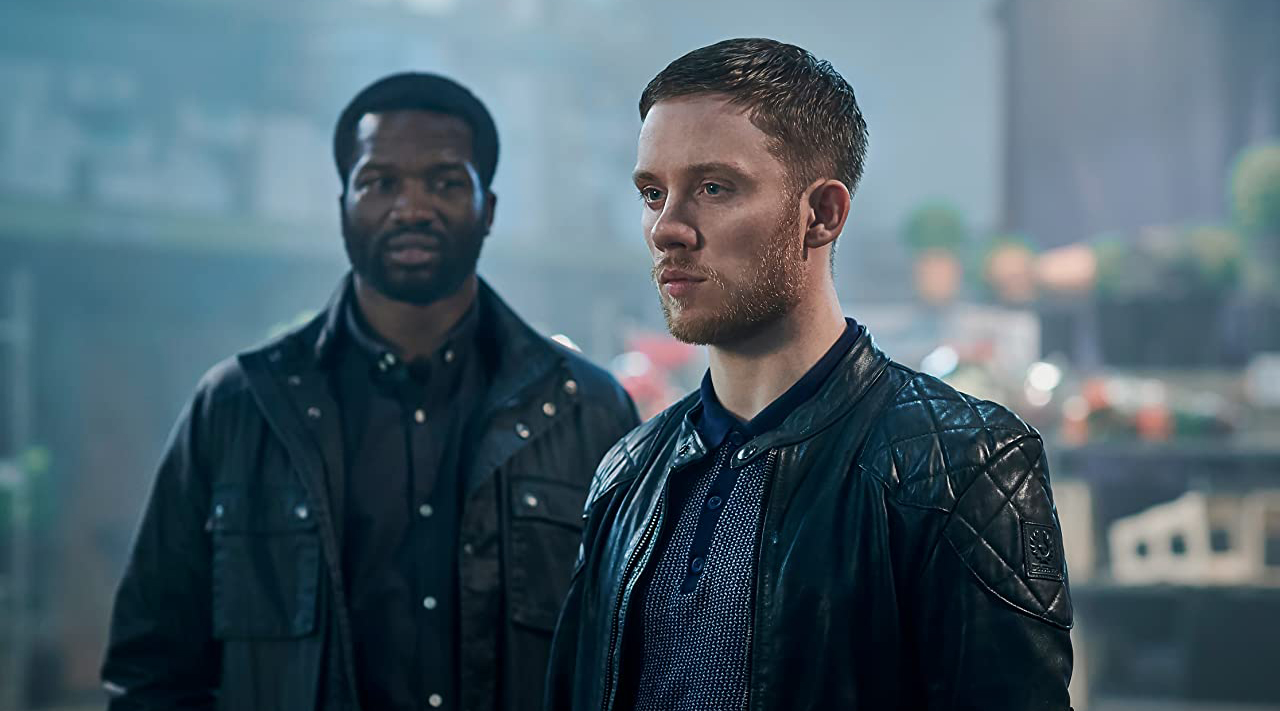 Gangs of London was a show that put its characters through hell – and by extension, all of us watching at home too. Created by The Raid director Gareth Edwards, it was a brutal, bloody and breathlessly fast-paced action-crime drama that hit the ground running in episode one and didn’t let up until the very end. Centred around the power struggles between rival gangs and criminal dynasties in London, it had us all teetering on the very edge of our seats. But it was the more human element of the series, the internal moral struggles, that was the most compelling part of the show. It constantly asked the question: What are these characters willing to do to remain at the top? The answer is absolutely anything – or they’ll burn the city to the ground on their fall to the bottom. – Natalie Xenos 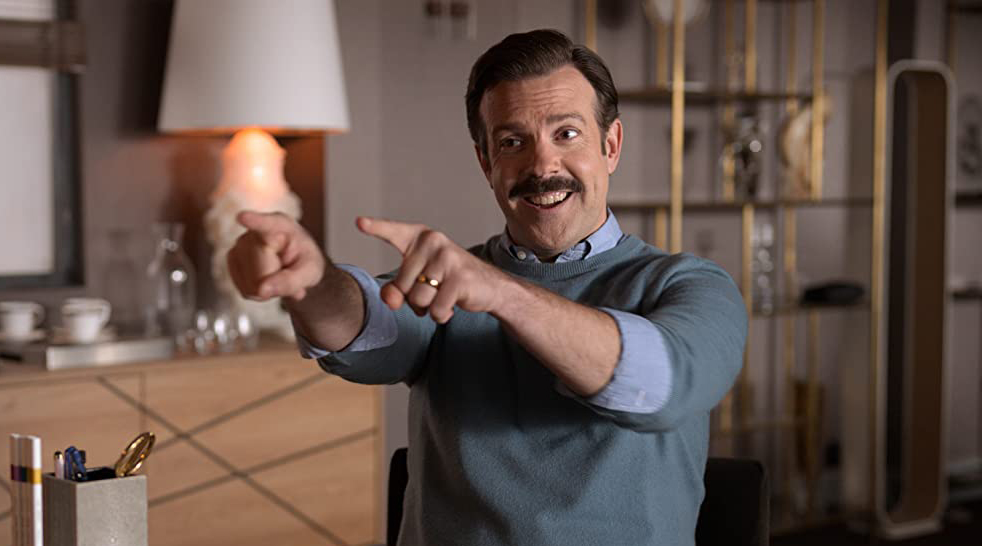 In a year as tumultuous as this one has turned out to be, Ted Lasso offers the world something a little more wholesome and comforting to get lost in for a few hours. Starring Jason Sudeikis as the unfailingly polite and ever-affable Ted Lasso himself, the Apple TV+ series takes a few episodes to find its feet as it establishes its premise, its characters and their motivations, but it’s a series that very much benefits from the binge-watching model. It’s not long before the series’ charm makes itself known. From the very first episode, Ted Lasso himself is a beacon of optimism, but while his permanently good-natured approach to scheming bosses, surly footballers and abusive football fans initially feels one-note and frustrating, as the series continues, Ted Lasso soon proves itself to be a smart, sweet and feel-good show about a genuinely good person who wants to help this team thrive, both personally and professionally. Seeing Ted constantly choose to be nice and friendly, even while dealing with his own personal heartbreak and sadness, is a reminder that the world isn’t always a terrible place. Ted Lasso is an enjoyable, hopeful series that’ll have viewers laughing, crying and feeling just a little bit more hopeful too. – Megan Davies 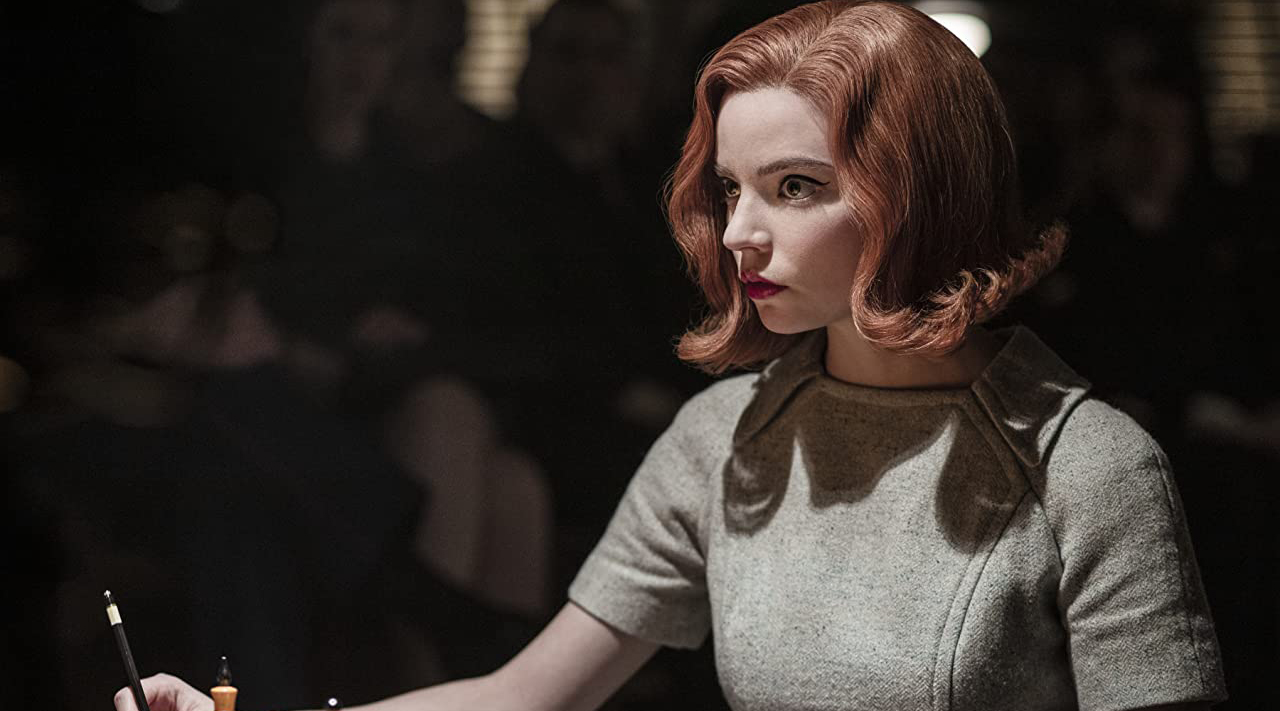 The best Netflix Original of the last few months follows Beth Harmon (Anya Taylor-Joy), an orphaned chess prodigy, as she deals with addiction problems and a cloud of tragedy that just won’t leave her alone. You perhaps wouldn’t expect a series about chess to be achingly stylish, but every element of The Queen’s Gambit – from Beth’s enviable wardrobe to the lavish hotels where she stays whilst playing tournaments – is dripping with glamour. Anya Taylor-Joy’s smart, impish performance gives the show both buoyancy and heart. – Chloe Walker 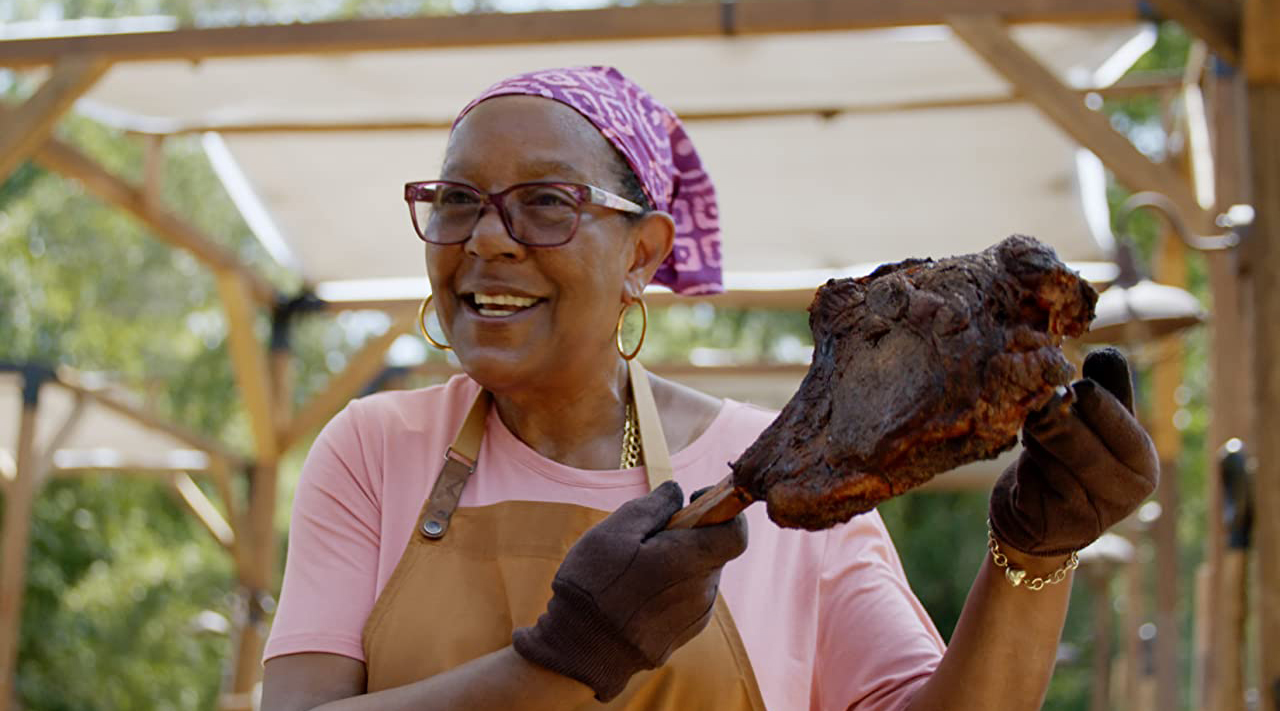 Not one person said: I wish there was an American version of The Great British Bake Off but instead of cakes they made barbecue food. Yet here we are. A triumph in endearing and good spirited competition, Netflix’s The American Barbecue Showdown manages to wow with mouthwatering culinary cooks, a selection of silly and smart smokers, and interesting challenges that keep each round fresh. A relatively petite 8 episodes of around 40mins make this the perfect binge-watch – getting your own barbecue in is recommended or you’ll be very jealous. – Nick Gomez

All Creatures Great and Small 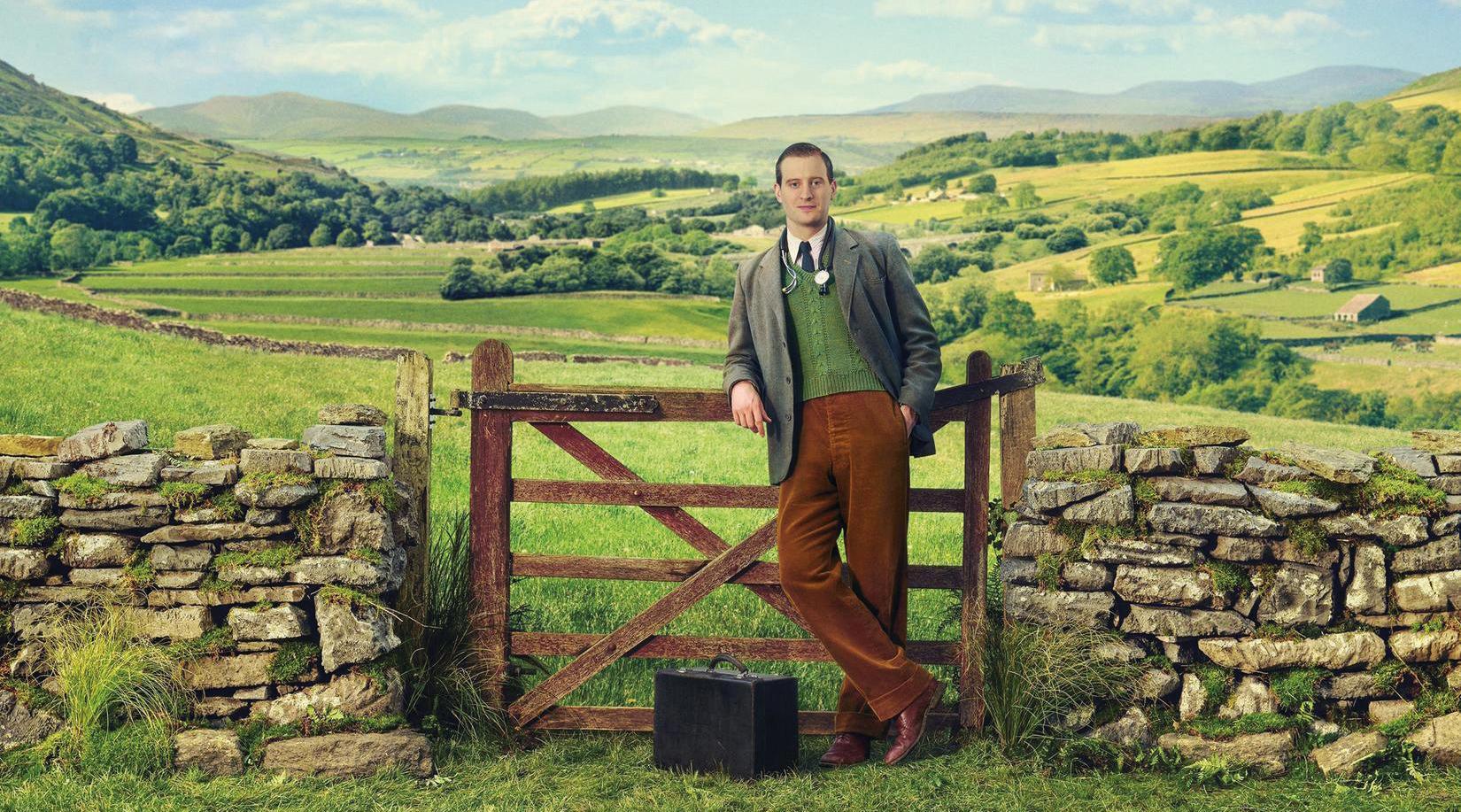 Those of us of a certain age are too young to remember the original All Creatures Great and Small TV series, which is why the 2020 reboot was such an unexpected delight. Based on the books by James Herriot (the pen name of British vet Alf Wight), the series follows a veterinary surgeon who moves to Yorkshire to take on a job at the local practice and who has to win over not only his superior but the hardy locals too. This arrived on our screens at a time when people needed something slow-moving and family-oriented to cheer them up. It was six sweet episodes of beautifully bucolic scenery and rural village drama – the perfect comfort viewing. – Natalie Xenos

Never Have I Ever 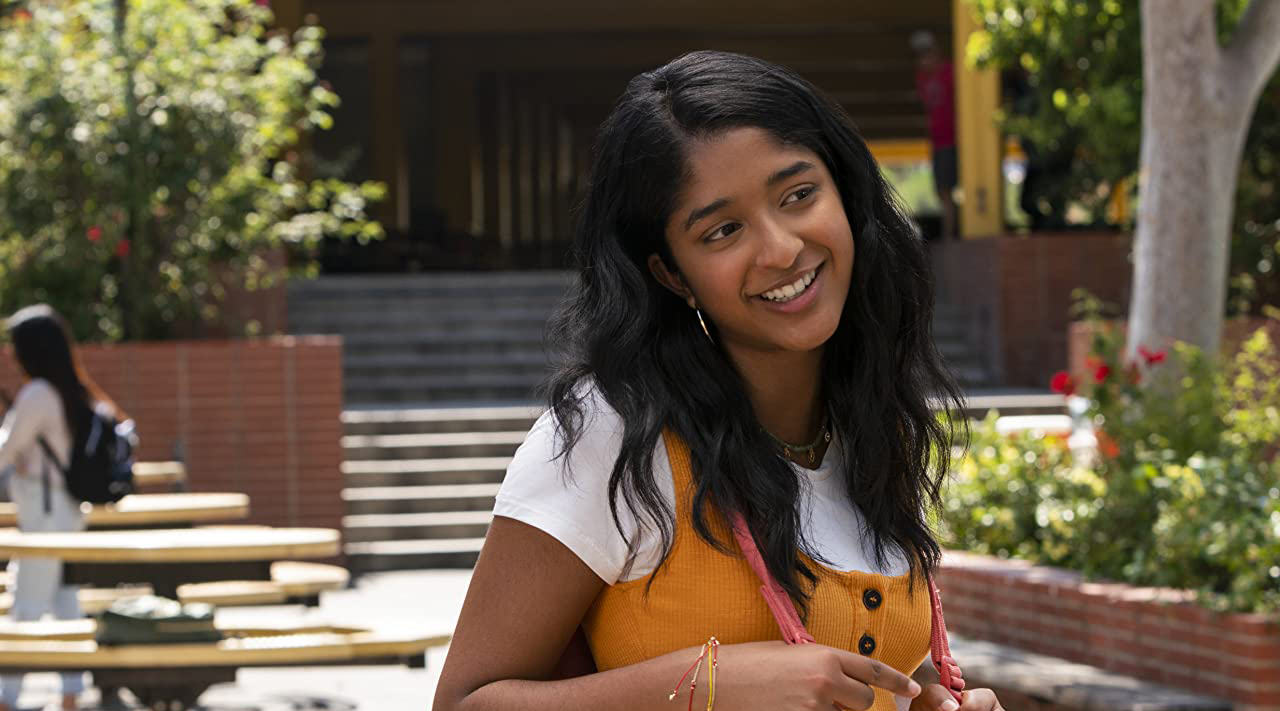 Never will I ever stop shouting about Netflix’s brilliant new series Never Have I Ever, the smart, endearing, honest and moving high school comedy-drama series created by Mindy Kaling. It’s a show I previously picked as one of Culturefly’s best TV shows to watch right now back in June but, six months on, Never Have I Ever more than holds its own as one of the best TV shows of 2020 too. With clever writing guiding a refreshing take on the teen coming-of-age drama and a charming cast of characters led by a star turn from series lead Maitreyi Ramakrishnan, who plays 15-year-old Devi Vishwakumar, Never Have I Ever remains one of the year’s strongest TV shows.

The series deftly balances the awkward teenage growing pains of school, relationships and friendships with the poignant exploration of a grieving family and the life of a first-generation Indian American teenage girl living in Los Angeles, and still manages to make sure that every one of its 10 episodes is funny, sweet and entertaining, even through all the devastating, embarrassing and awkward moments. The already-confirmed second season can’t get here soon enough. – Megan Davies 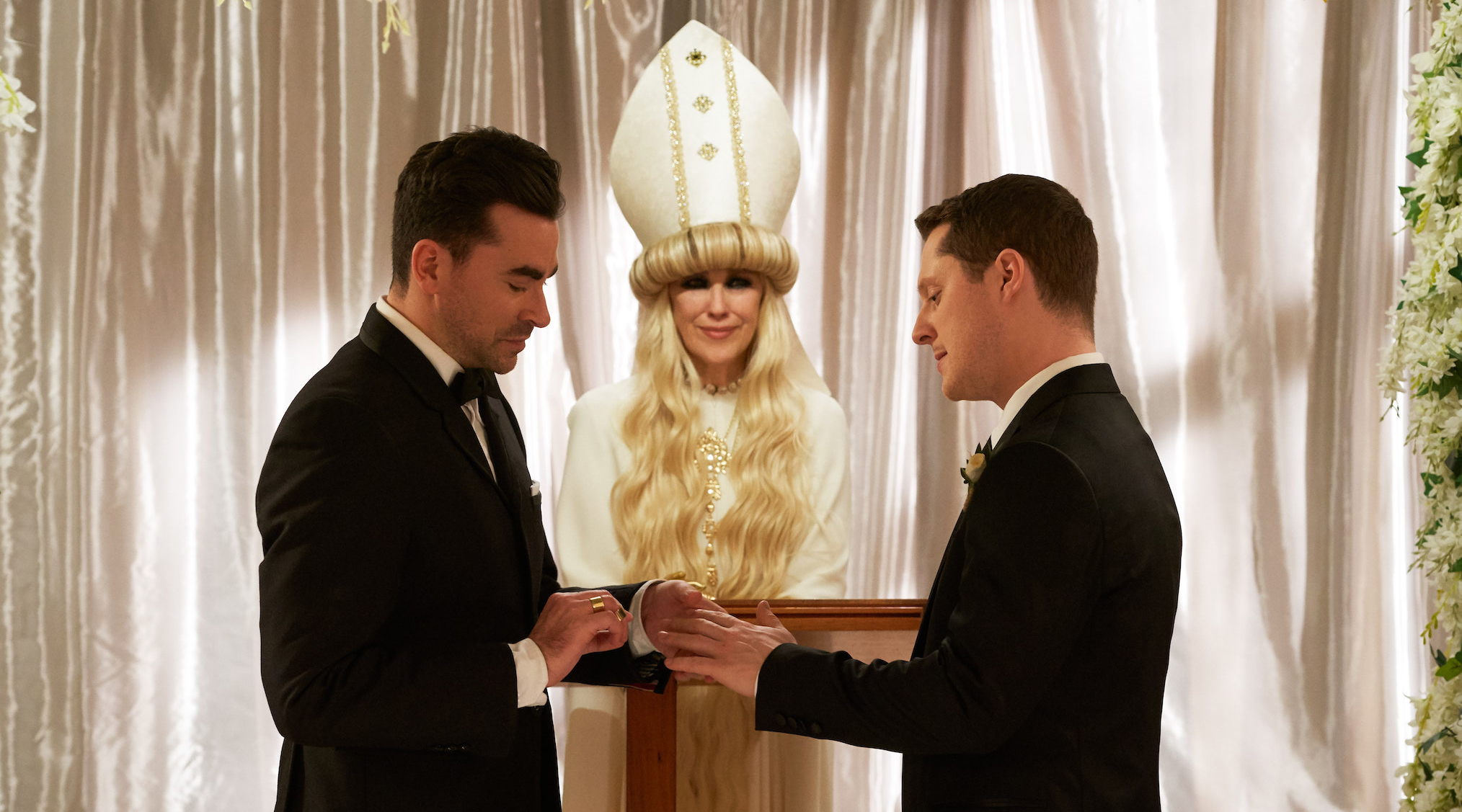