The Walking Dead Season 8, Episode 6 Review: ‘The King, the Widow, and Rick’

As we’ve established in previous weeks, The Walking Dead is very much like a long term relationship gone wrong. The question we must desperately ask now is how do you walk away from a seven year relationship? It wasn’t always so bad but overall you know you’re not right for each other. The negatives far outweigh the positives now yet it’s difficult to find the strength to pull that plug completely. I find myself almost dreading each episode turning up on a weekly basis as much as Monday itself. And yet in the back of my mind I still have a little faith that it might return to its glory days. Sadly they seem further and further away with every passing week.

You see I’d always been the first to defend The Walking Dead against anyone who said it was boring or pointless or meandering or the characters were terrible or any type of criticism because I loved the fact we were getting a weekly zombie show. Horror has often been underrepresented on TV and to see The Walking Dead come along and become a huge success was pleasing to my soul. The same can be said for The Big Bang Theory, something I loved seeing bring geek culture to the mainstream and yet over time even that has become tiresome and a shadow of its former self. There’s a lesson to be learnt here about US shows running for too long and sadly one that very few take notice of. 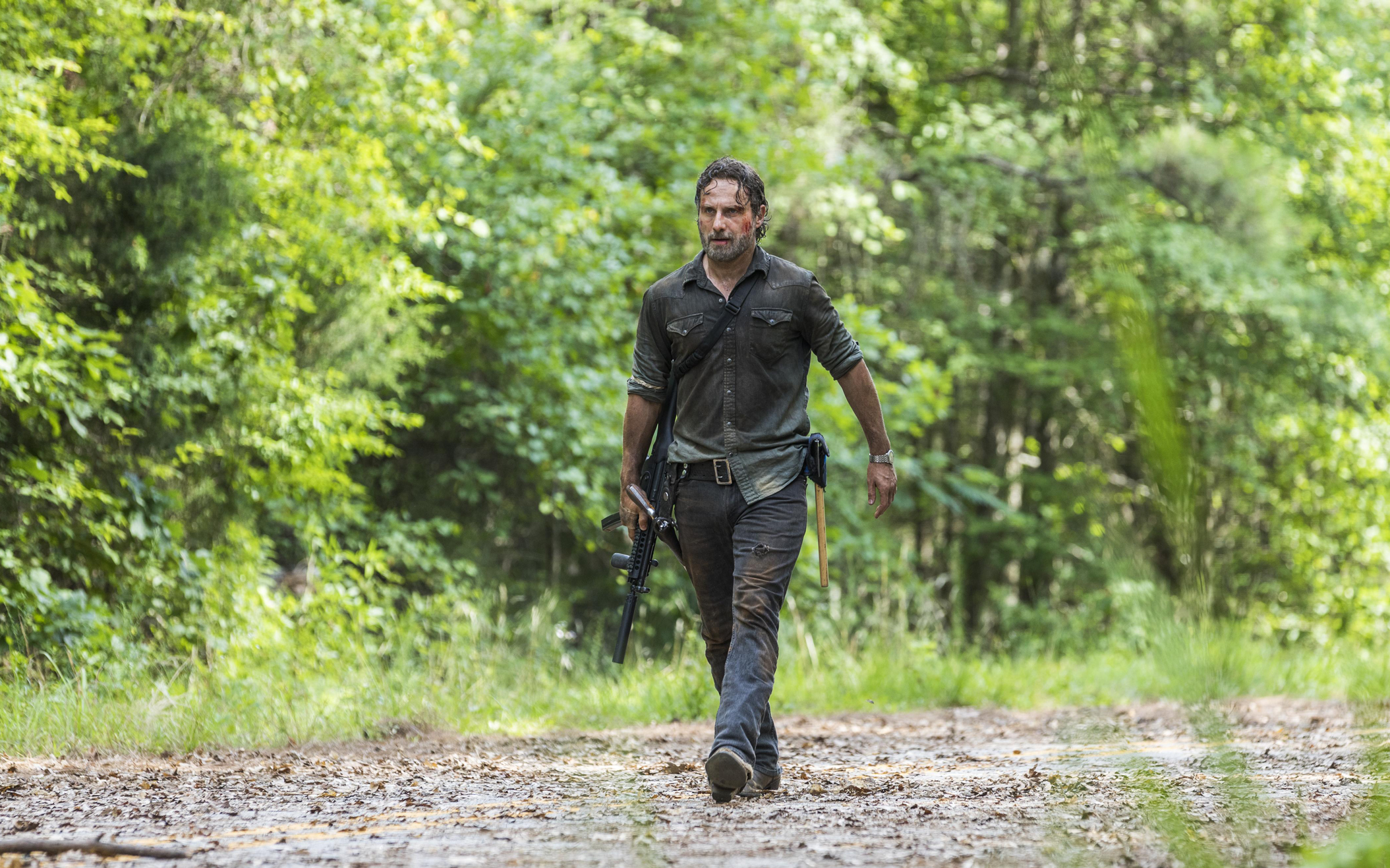 It’s strange that the writers manage to pack in so many characters, so many different storylines and yet make you feel completely empty by the end of the episode. It’s like you’ve been going round and round for an hour and then you find yourself right back at the start having achieved absolutely nothing. Again they left us on various cliffhangers such as the helicopter that Rick (Andrew Lincoln) saw and Negan (Jeffrey Dean Morgan) awaiting his next move but do we get anything on those whatsoever? Of course not! How stupid would they have to be to actually give us answers? It’s like your worst frustrations with Lost only with absolute boredom thrown in too. If only we could be as lucky as to have characters as thought-provoking as Locke or Ben turn up.

Instead of answers in ’The King, The Widow and Rick’ we get that classic favourite of The Walking Dead – talking, talking and more talking. There’s nothing wrong with dialogue but take something exceptional like Line of Duty that drives story and character development with outstanding scripts and it puts The Walking Dead to shame. It’s almost as if the writers can only be bothered half the time and the other episodes they manage to write while they’re asleep. They have a few ideas to sprinkle throughout a season and then end up having to fill the gaps with absolute pointless and forgettable dross. Let’s take Jesus (Tom Payne) for example and how they’ve absolutely ruined a character full of potential that many were excited about and now he’s a whiny depressed bore who ruins every scene he turns up in. Why is it that difficult to actually create someone or something interesting? 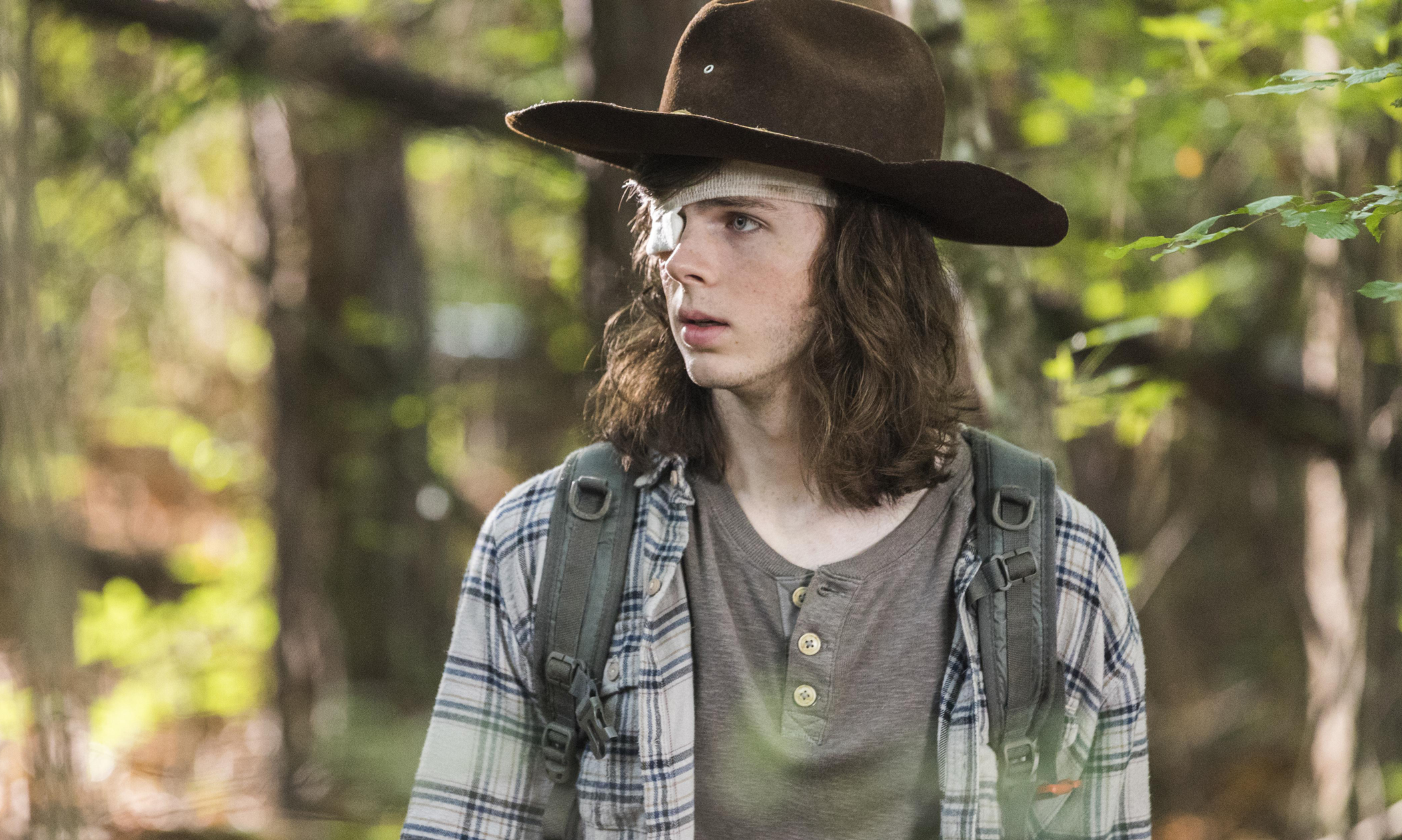 The same goes for Carl (Chandler Riggs) who they had almost – I stress ALMOST – made into a bearable character who could have potentially gone on to lead the group. Yet this week he was a complete moron again and I’m back to hoping he gets his other eye destroyed as soon as possible. He needs a lot more to him than what he’s been showing lately. It doesn’t help that he’s now tied to Siddiq (Avi Nash), yet another unnecessary new character who some will argue is a great addition but the fact remains we don’t need additions at all. We’re already having to deal with numerous groups, including Rick going to see Jadis (Pollyanna McIntosh) which managed to get him locked up and naked and not even in an enjoyable way. Is he that dumb? Who knows anymore?

The part where Rosita (Christian Serratos) blew someone up with an RPG was the perfect summation of The Walking Dead at this point in its lifetime. It was completely ridiculous, made no sense whatsoever and simply felt as if someone threw it in there for a laugh. They just don’t even care anymore. Who needs logical storytelling when you can do stuff for shits and giggles and assume your audience will stick with you anyway. And yet week after week the viewing figures are starting to tell a different story – one of people that are bored of waiting around for absolutely nothing.

If there was a highlight this week then it was the conversation between Carol (Melissa McBride) and Ezekiel (Khary Payton) that actually felt quite emotional, something that The Walking Dead often fails to manage. Even Jerry (Cooper Andrews) gets very little to do this episode other than stand around and that’s a complete waste. In fact that’s the best way to describe 90% of The Walking Dead right now. If they’re realistically aiming for another two or three seasons then they seriously need to up their game and make us fall in love with the show again. Throwing out random explosions in a desperate attempt to wow us isn’t enough. The sad truth is you could easily skip ‘The King, The Widow and Rick’ and not miss a damn thing. At this point you could watch a season opener, the mid-season finale and the end episode and you’d probably get the picture. No wonder Lennie James is off to Fear The Walking Dead instead. Shall we all follow him?