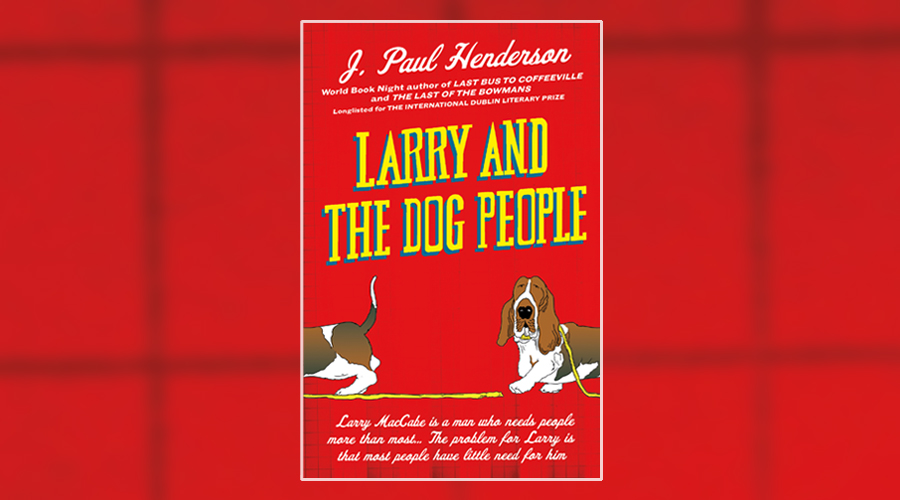 Having read J. Paul Henderson’s previous book, The Last Bus To Coffeeville, I was immediately intrigued by his latest title, Larry and the Dog People, and was eager to discover what delights Henderson had up his sleeve in this new adventure.

Larry and the Dog People has an opening that instantly grabs your attention: three separate bulletins describing a sequence of extraordinary events. A report of a devastating explosion in the Church of Latter-Day Lutherans, Georgetown, which was holding an annual Blessing of the Animals; followed three days later by a report of two male bodies being found at a house close-by. Two weeks later there’s news of an Emeritus Professor, Laurence MacCabe, being arrested in connection with the church bombings, the deaths of the two men previously found in East Village and questions relating to a separate shooting.

Laurence ‘Larry’ MacCabe is a man who yearns for company. He’s nice, chatty, extremely knowledgeable, and knows more about inane facts and unusual information (particularly about a certain Desert Land Act) than most people will ever do in a lifetime. The trouble is he wants to share it with anyone willing to listen, regardless of whether they want to hear it. When his long-suffering, quiet-as-a-mouse wife unexpectedly dies, it leaves Larry bereft, and with no outlet for his incessant musings.

Seeking solace, he hits upon the idea of volunteering to work in a retirement home where he will have a captive audience. It’s here he meets the first of a new group of friends in the form of Laura Parker, the administrator of the home. Larry’s acquaintance with the elderly residents proves far too agitating for them, and they see him not as a saint but as a tormentor. Laura, a kind soul who recognises Larry as well meaning, takes pity on him and provides the perfect solution for the lonely widower: a dog.

“Larry MacCabe was a man who needed people more than most. The problem for Larry was that most people had little need for him. It was an equation without solution.”

After a false start with a mutt whose life comes to an untimely end, Larry soon finds the perfect replacement dog, an orphaned but gentle Basset Hound called Moses. With Moses in his life, Larry’s confidence improves and his life starts to move in new directions with his weekly meetings in the park. Here a small group of unlikely men and women meet, and whilst they’re as different as chalk and cheese, they all have a common bond in their dogs.

Along the way, Larry accepts an invitation to deliver a talk in Israel, seeing it as the perfect opportunity to expound his knowledge on The Desert Land Act of 1877. However, this new adventure has cataclysmic consequences, catapulting Larry into potential disaster.

I instantly warmed to Larry and his hapless traits, and found myself rooting for him in the same way Laura Parker did when she took him under her wing. The group of dog owners who become an integral part of the plot are no less interesting, and every character is so unconventional that I found this book enjoyable from the outset.

I didn’t think many tales could be as enjoyable as The Last Bus To Coffeeville, but Larry and the Dog People proves itself to be on a par with it, whilst being refreshingly different. Alongside the wily humour, Henderson captures emotions such as grief and loneliness, as well as personality disorders with a deft touch, without bogging the reader down.

With a brilliant combination of tragedy, humour and lawbreaking, Henderson spins such tantalising twists that you’ll find yourself astonished when you least expect to be – you have to read this remarkably different tale to believe it.