The Walking Dead Season 8, Episode 11 Review: ‘Dead or Alive Or’

I’ll happily admit that I’m one of those people that will generally skip every recap at the start of a TV show. Is my memory that bad? No, so I don’t need to see that stuff every week. I suppose it could be worse. Shows could be like Battlestar Galactica where they showed what was going to happen in the episode you were watching. Why? I still don’t understand that. Anyway, I digress. My main point is that I do actually watch the recaps on The Walking Dead because it reminds me of all the characters that I haven’t seen for a month and that I’ve completely forgotten existed. Take this week for example. I’ve been so caught up in all things Carl (Chandler Riggs) and Rick (Andrew Lincoln) that I probably wouldn’t have even noticed if they’d never gone back to Gabriel (Seth Gilliam). Sadly this week’s episode, ‘Dead or Alive Or’, made me feel like perhaps it would have been best if they never had.

It wasn’t a bad episode as such, certainly not by The Walking Dead standards, but the whole Gabriel going blind thing just felt a bit daft didn’t it? It was bordering on comedic at times in terms of how ridiculous it ended up, when really they could have made it feel a lot more threatening and realistic. I’m not against the idea but it’s something that needs to be implemented carefully and not feel like a terrible gimmick, and sadly the majority of Gabe’s movements and decisions this week felt a little stupid. It probably doesn’t help that I’m not religious in the slightest and I struggle to relate to a man that believes so passionately in God’s path and being directed by his faith, so perhaps this storyline plays better to other sections of the audience. I just felt like there were moments that were too unbelievable even for a show that focuses on reanimated corpses.

That’s enough about the disappointments – Maggie (Lauren Cohan) is back! It’s always a pleasure to have her on board and I find her a more agreeable leader than Rick, so it’s a little concerning to read all the contract negotiation and pay issues. Seriously, give her whatever she wants because she’s one of the best things about the show, and with Carl gone they should put all their focus on her as the future but I suppose they’ll be hesitant to do that if they don’t know if she’s sticking around or not. Understandably, Maggie was still in a suspicious and cautious mood with the Saviors and Gregory (Xander Berkeley), but she seemed to mellow eventually and give them a little leniency when it comes to food and time outside the cage. It helps that she now has Siddiq (Avi Nash) on her side as a doctor and I’m sure he’ll prove himself to be a valuable addition to the team, as he’s no doubt determined to prove Carl was right in saving him. 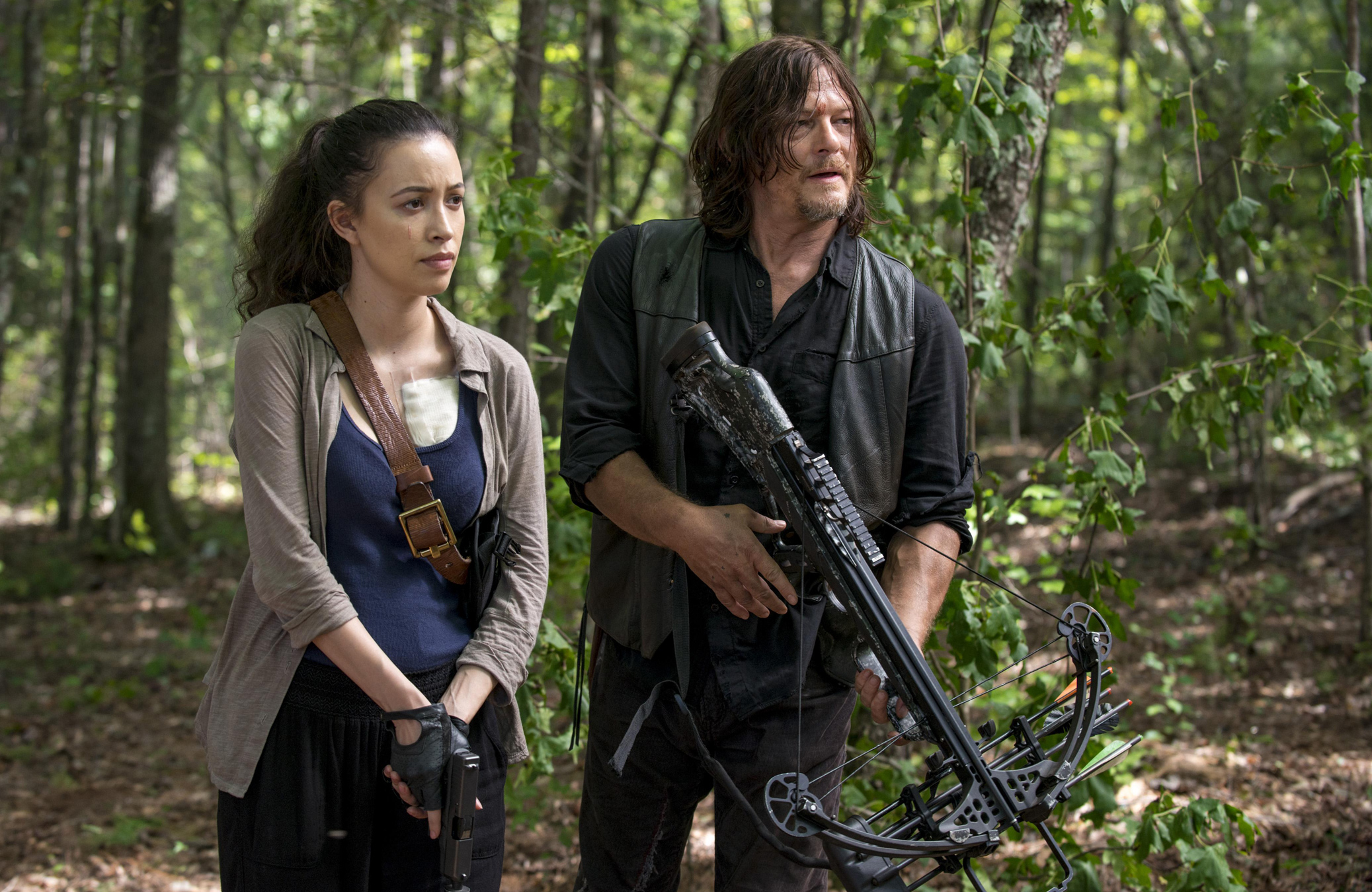 The tensions between Dwight (Austin Amelio) and Daryl (Norman Reedus) and Rosita (Christian Serratos) were highlighted but it was really Tara (Alanna Masterson) that struggled to trust him and allow him to prove his worth to the group. You can see why she wouldn’t exactly be walking hand in hand with him through the woods. Dwight has been one of the more interesting supporting characters and this week was no different as his decision to sacrifice his freedom to save Tara made him into a far more likeable character and someone we now hope survives. Even Tara seemed to be won over by the end and that’s no easy feat. Perhaps he’s all about the double double cross but it seems unlikely. Dwight is a good example of how the writers can make characters interesting but they fail to manage it with everyone because there’s simply too many to juggle.

There’s no avoiding the fact that ‘Dead or Alive Or’ was really Gabriel’s story though and his friendship with Dr. Harlan Carson (R. Keith Harris) ended in tragic circumstances. It’ll be interesting to see where Gabe goes from here and how his faith is tested amongst all the loss and pain. Caught again by the Saviors and ending up with Eugene (Josh McDermitt) once more isn’t exactly an ideal situation for him, and it’ll be interesting to see if either man makes it away from Negan (Jeffrey Dean Morgan) in one piece. Chances are they won’t, especially with his new plan to infect weapons with walker blood. That’s not a plan that involves making friends with the opposition that’s for sure. It seems like the loss of Carl was only the beginning of something much bigger. But with audience figures at their lowest for years, will anyone still be around to find out?