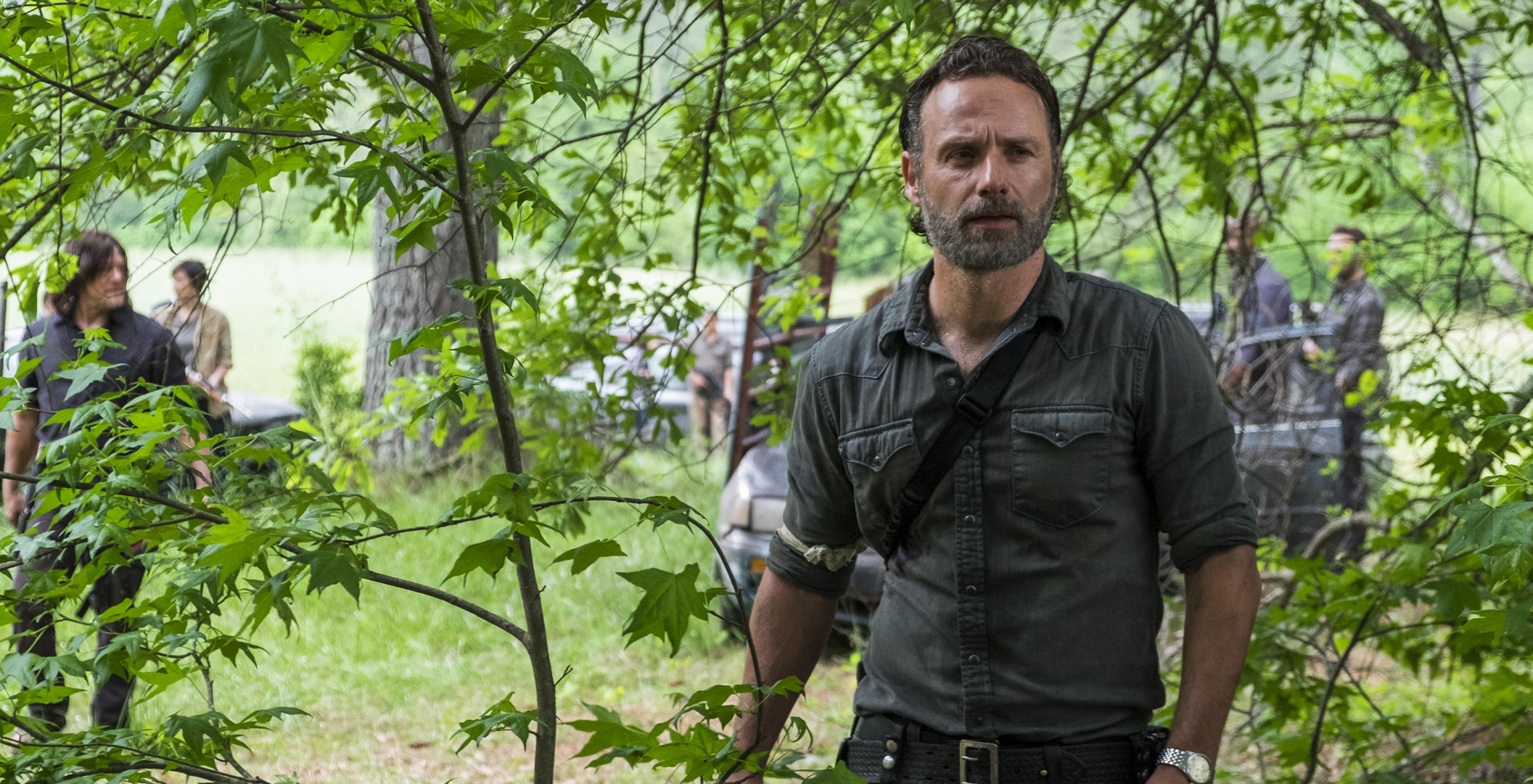 X Factor is back on the telly. Alan Sugar is shouting at people on The Apprentice. Oh and there’s a little zombie apocalypse show called The Walking Dead which has returned too. We’re definitely on the slippery slope to Christmas now! The break between seasons seemed to go a lot quicker this time didn’t it? Probably because the writers were nice enough to make sure we weren’t left with a humongous cliffhanger like they did before. There’s no ‘who did Negan kill?’ mystery hanging over our heads as we enter season 8 where we finally hit that 100 episode milestone with the season opener ‘Mercy’.

I have a love/hate relationship with The Walking Dead. At its best it can be one of the top shows on TV but at its worst it’s a meandering mess. With arguably too many episodes a season and so many characters to juggle, they often struggled in season 7 with jumping all over the place and splitting up the core group. Thankfully in ‘Mercy’ we’re shown from the get-go that our favourites are all back together and on the same page. Rick (Andrew Lincoln) and his group stand beside Maggie (Lauren Cohan) and her Hilltop followers, and the ever-enigmatic King Ezekiel (Khary Payton) brings his gang – and pet tiger Shiva of course – to the party. With a few choice words and motivational uproar we’re thrust into the main purpose for this 100th episode – to confuse, disrupt and potentially even kill Negan (Jeffrey Dean Morgan) and the Saviors. 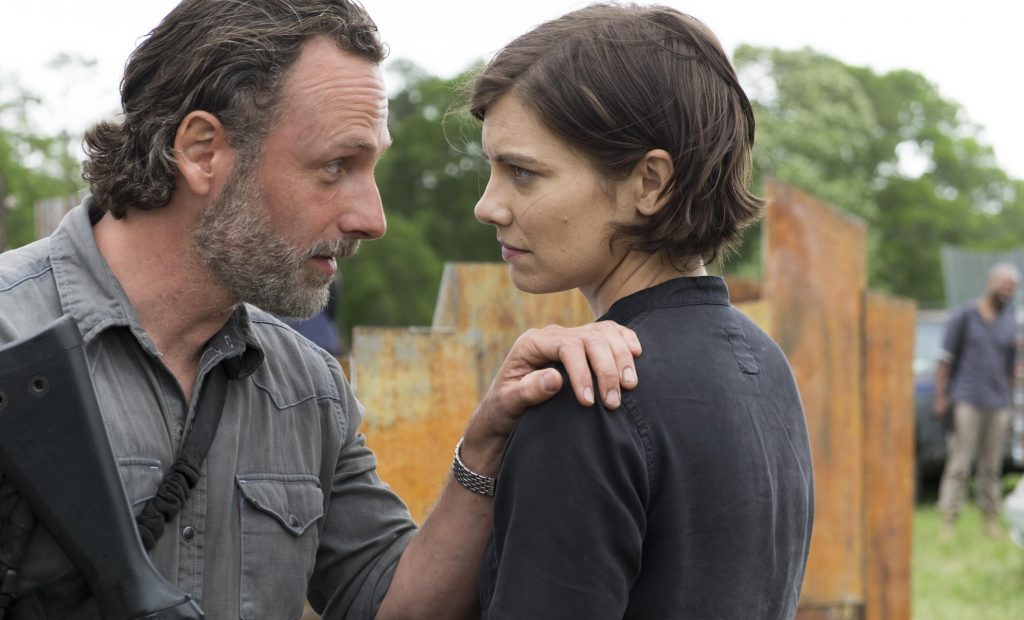 The show instantly feels refreshed and rejuvenated for the more positive attitude from the characters and their hopeful outlook on the future. As important as it was to bring Rick to his knees against Negan and give some real stakes to everyone’s survival, it was emotionally draining and ultimately frustrating. Episode 100 is all about seeing those we know and love at their kick-ass best and finally fighting back against their biggest threat. It also gives us a chance to see how far so many of them have come since the beginning, especially Carl (Chandler Riggs) who is stepping up and Carol (Melissa McBride) who is hardly recognisable from the woman she once was.

The fight against Negan takes a lot of planning and careful calculation. While many join the super group to storm Negan’s base, Carol is away with Tara (Alanna Masterson), Morgan (Lennie James) and Daryl (Norman Reedus) acting on intel from the once loyal Dwight (Austin Amelion) who is SO done with Negan. Picking off guards one by one Team Carol then focus their attention on directing a huge group of walkers towards the Sanctuary. It’s much better seeing this group back to being proactive and together rather than divided and downtrodden. As interesting as it is sometimes to see Carol and Morgan emotionally challenged, they’re way more fun when they’re unleashing hell on the undead. Tara is definitely awesome enough to hang with the cool kids. And Daryl? Well let’s just say Norman Reedus probably had a lot more fun filming this opener than most of what he did last season.

Being the 100th episode it’s nice to see various callbacks including the Rick and Carl gas station scene which gives us a strong feeling of Carl walking in Rick’s shoes these days. We see how different their approaches are in regards to Siddiq (Avi Nash) and while Rick is usually right, maybe it’s time for Carl to earn a little respect. There are a few nice walker cameos and throwaway lines that die-hard fans will have picked up and enjoyed also. It gives us some time to really appreciate the man Carl has become and when Michonne (Danai Gurira) calls him a leader, it’s recognition for his maturity and focus, as well as her growing love for him as part of a family with Rick. Carl is now willing to stand up to his dad and take a stand if he needs to and he’s certainly looking like the future of the show. 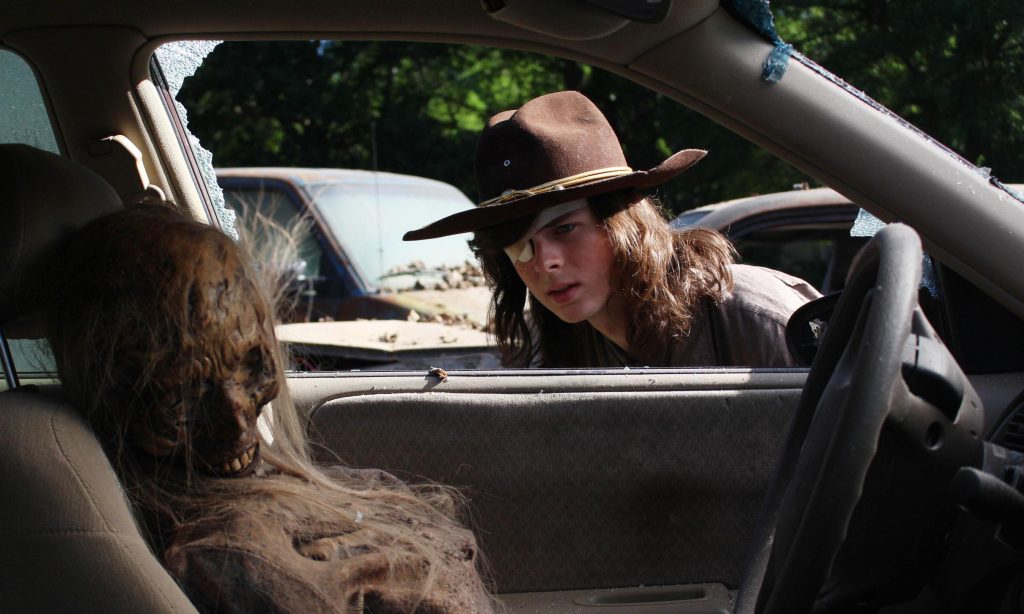 As they say – the best laid plans of mice and men often go awry. As much as Rick and company get their heads down and work things out to take on Negan, it doesn’t quite work. He gives some of Negan’s supporters an opportunity to leave but they don’t take it, and Gregory (Xander Berkeley) turns up to show his snivelling ways once again. The main focus is to allow the walkers in but Rick gets distracted by his hatred of Negan and lets rage take over. Father Gabriel (Seth Gilliam) thankfully pulls him away but then hesitates with leaving himself by trying to save Gregory. While he’s relieved to find shelter from the walkers in a conveniently placed trailer he hears a familiar voice inside and suddenly he’s cosying up to everyone’s favourite villain with a barbed wire baseball bat. New BFFs? Only time will tell.

As dramatic as all of this is, the real talking point of the episode is the various time periods we seem to visit with Rick. Everyone saw the Old Man Rick in the trailer and lost their minds and here it’s no different. We see him, Michonne, a toddler Judith and Carl in what appears to be a much brighter and happier Alexandria. But is this the future or simply the dream that Rick holds on to to keep him going? The other scene of Rick distraught in a forest clearly fits in somewhere too but we’re left in the dark about that as well.

What’s real? What isn’t? No one knows at the moment but the season opener is strong enough for us to want to stick around for answers. It’s not the best the show has ever been but it really feels as if The Walking Dead is at least back on the right path again. It needs to play to its strengths and keep the characters together that work well in partnerships like Carol/Morgan/Daryl and allow ones like Carl to mature and become easier for the audience to like. We want less separation, less big speeches and more action and suspense, which hopefully the show can deliver. But whether the future will be as rosy as suggested remains to be seen and, with no end in sight, it could be a long wait to find out.

Book Review: The Girl in the Green Dress by Cath Staincliffe