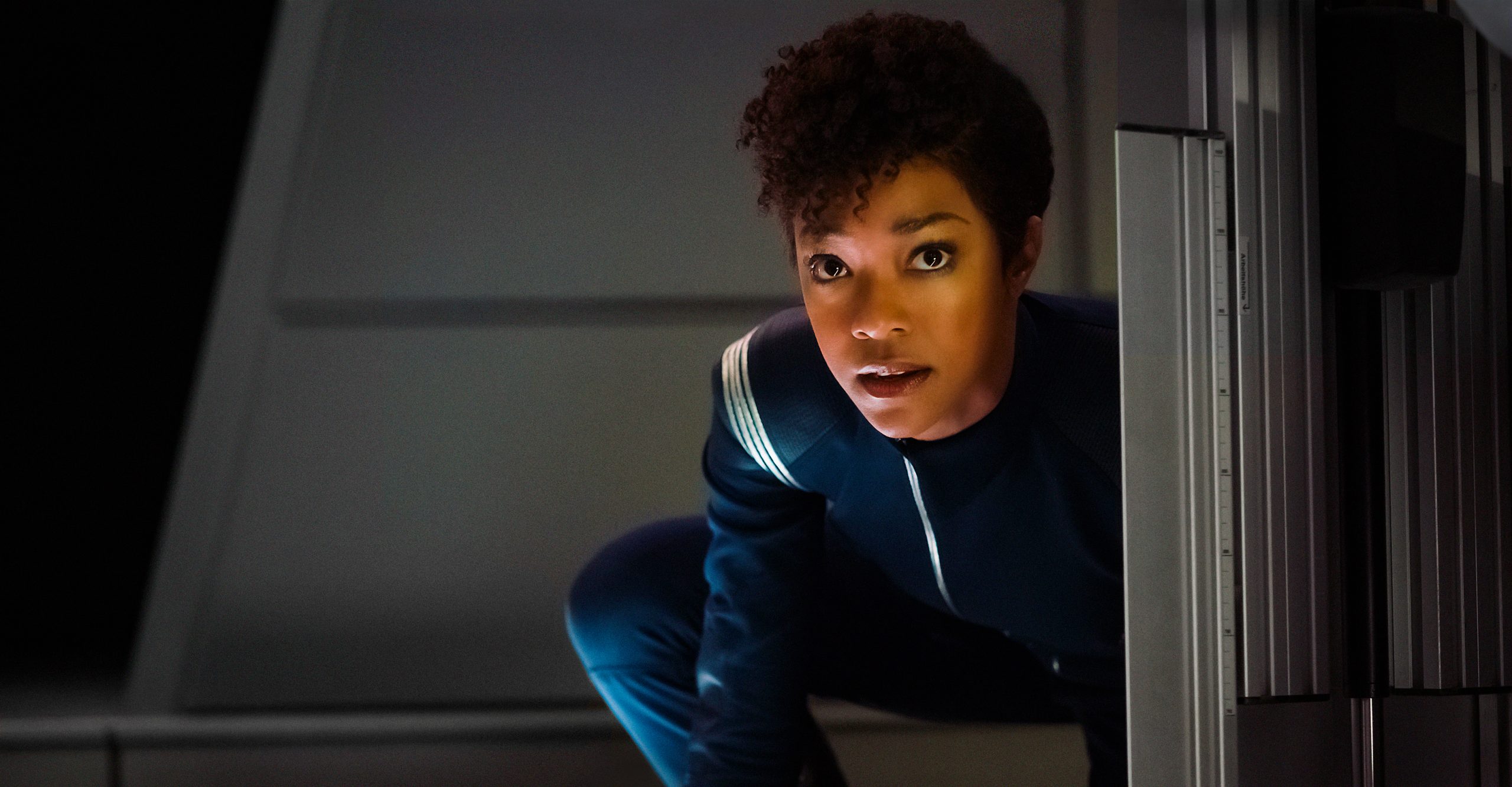 It’s fifty-one years since William Shatner and Leonard Nimoy stepped on to their first paper mache planet, and boy have things changed.

The first thing you notice about Star Trek: Discovery is that it looks amazing. The VFX are phenomenal, the vivid blue and orange led colour scheme stunning; there isn’t a frame of the pilot that would look out of place in one of the recent Star Trek movies. And with so many areas explored in the first episode alone, you get multiple chances to enjoy the galaxy’s visual splendor.

A breach is found in the hull of the USS Shenzou. Despite the risks involved, First Officer Michael Burnham (Sonequa Martin-Green) offers to go and take a look. Whilst she’s on the mission, she is attacked by a Klingon. When she returns to the ship and explains her injuries, her fellow crew, led by Captain Philippa Georgiou (Michelle Yeoh), think she must just be concussed. After all, ‘almost no one has seen a Klingon in one hundred years’.

Soon though, it’s revealed that Burnham was not delirious, and the Klingons make themselves known. This leaves the crew with a quandary; go against the Starfleet rules and shoot first, or wait, and risk being annihilated? 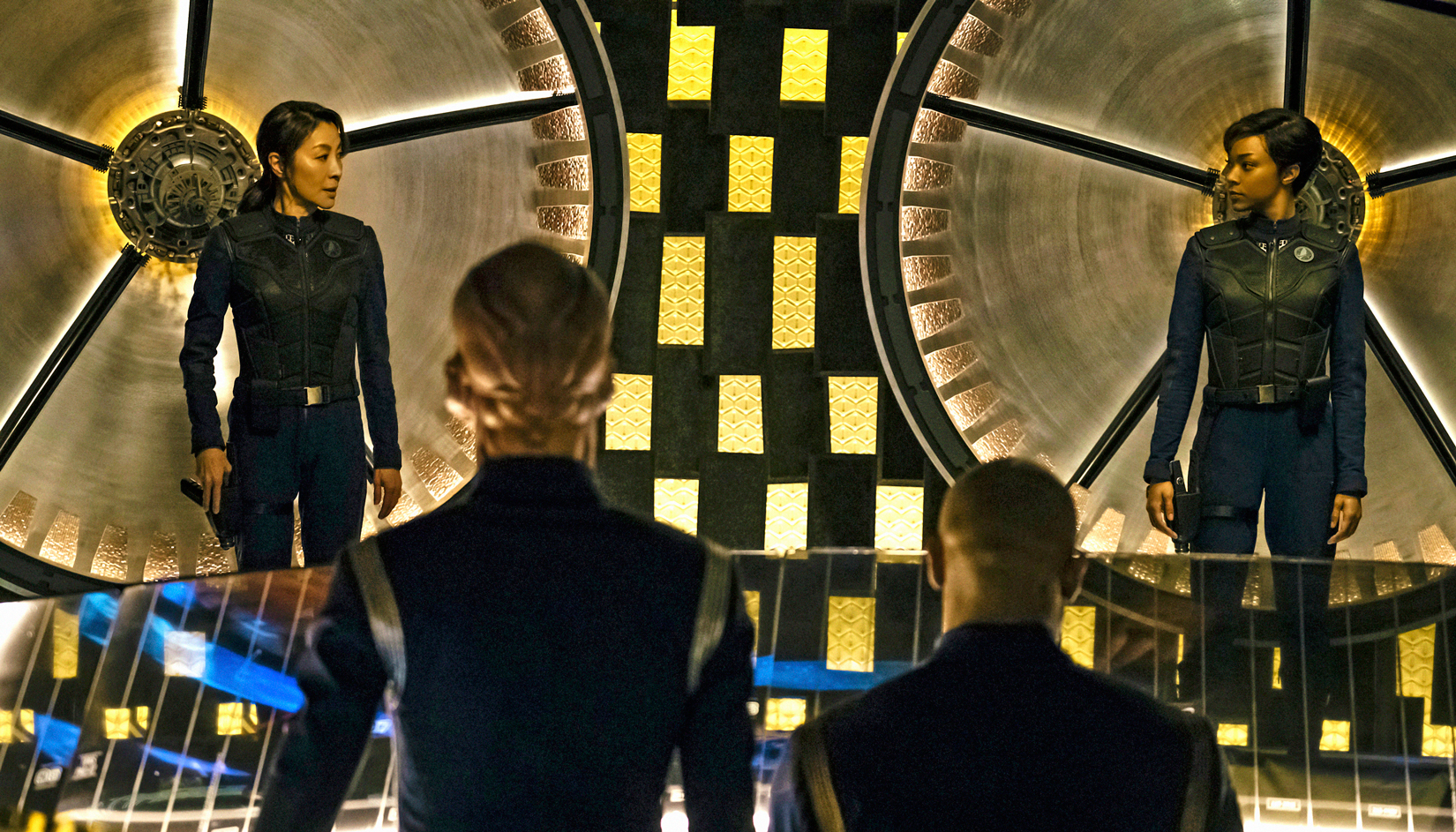 Star Trek: Discovery makes a couple of significant changes from its sister shows. Perhaps most notably, it is the first Star Trek series to have the top two command positions both filled by women, a move that is in complete accordance with the franchise’s half-century long mission of promoting diversity and equality. It’s also the first series to predominantly take place from the point of view of the First Officer, rather than the Captain.

Burnham and Georgiou are the only characters we really get to know in the pilot. Yeoh is effortlessly commanding, but Martin-Green’s performance is, by design, more multi-faceted. From her log entry to her solo journey through space, Michael looks at the world with a wide-eyed wonder, leaping head first into places where ‘no man has gone before’. This curiosity, combined with an irritation with Science Officer Saru (Doug Jones) that recalls the rivalry between Spock and Bones in the original series, marks Michael out as an interesting character indeed.

Unfortunately, one episode in, she appears to be the only one. Complaining about too much action in a Star Trek episode may seem silly, but it would have done this pilot good to take a breather, and spend just a little bit of time establishing the rest of the crew. That characterization could have given the episode personality, which it’s sadly lacking. The dialogue isn’t great either, which may explain the lack of character. The actors don’t yet sound comfortable with all the technical jargon, and this being Star Trek, there is a lot of it. This will probably all come with time, however.

The pilot does do a good job at setting up storylines for the rest of the series, at least. There’s a battle brewing with the Klingons, who have a new look and a new leader (in a nice touch, Netflix also lets you watch with Klingon subtitles!). There’s also the relationship between Burnham and Georgiou, which is soon established to be close and friendly. A betrayal by Burnham at the end of the episode, as well-intentioned as it may be, is likely to have grave effects on that once strong friendship. And then, of course, there’s the matter of the title. The ship we see is called the USS Shenzou, not the Discovery. This suggests big upheaval in the immediate future…

There is a lot about the pilot episode of Star Trek: Discovery that disappoints. It looks truly impressive, but the complete emphasis on action means we don’t even start to get to know most of the crew. The constant action with no breathing room and no characterization leaves the episode feeling generic.

That being said, I will continue to watch, at least for a little while longer. The pilot does just enough to inspire curiosity about how the rest of the season will play out; what will happen to the relationship between Georgiou and Burnham, and who will win the epic battle with the Klingons. Frankly, with the pilot looking as beautiful as it does, I’d stick with Star Trek: Discovery as long as it keeps up the same level of visual magnificence. Here’s hoping it’s not too long before they add the personality too.