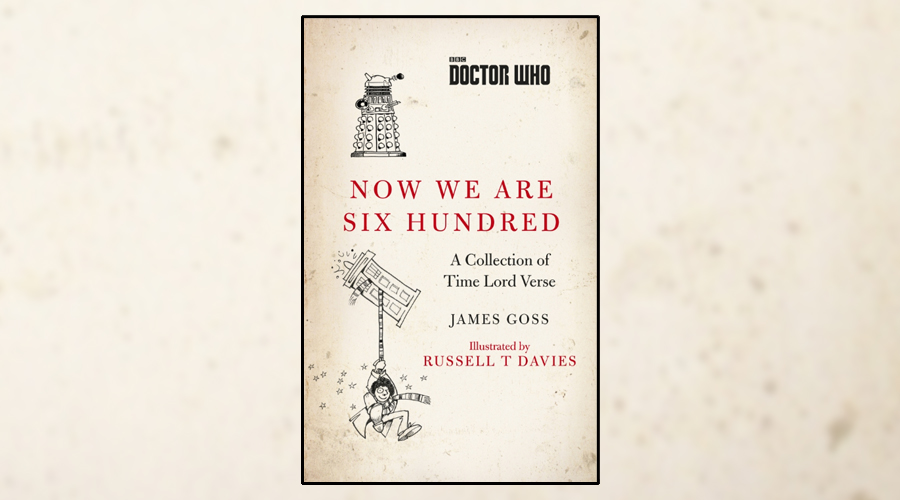 When it comes to writing reviews from a ‘populist’ perspective, the primary question has to be: who is this for? Perhaps it’s not so extreme as to require a Venn Diagram with the material in the middle and all the intersecting genres and interests, but where overlap exists, that material inevitably skews towards one or more of the elements over the others.

That question of audience and overlap is one that feels particularly appropriate regarding Now We Are Six Hundred, which by virtue of its subtitle – ‘A Collection of Time Lord Verse’ – might better, or more simply, be described as ‘the Doctor Who poetry book’. I’m sure there’s other Who-based poetry out there, but none to my knowledge officially published by BBC Books, and certainly none with illustrations from Russell T Davies, so the application of the definite article above feels right.

Yet with the ‘official’ status of the publication comes the renewal of that question; ‘fan poetry’ about Who could exist simply as a vehicle for the writer to express their admiration for the show and the Who mythology, but a book by those behind Doctor Who feels like it has aspirations beyond simply being about Doctor Who. Indeed, this speculation is rooted in fact; James Goss, the veteran Who tie-in writer behind the collection, almost said as much himself – “BBC Books have carefully baited an irresistible trap to lure people into reading poetry.” I’m sure that is a comment partly due to pre-release hyperbole, rather than some inadvertent reveal of a sinister motive, but it is a feeling I got while reading the book.

Despite being a lifelong fan of Who, and an ardent student, writer and reader of poetry (albeit of a style, severity and general demeanour far removed from that which I ever expected to find in this book), it didn’t feel like this was a book for me. Rather than plunging into the depths of both subject and medium, it feels like it only really scratches the surface of either.

So who is it for? Well, the target demographic is probably slightly younger than me – the fact that there are illustrations at all is an immediate sign of this – but more expansively, it also feels like the intended audience is meant to be slightly less invested in the show than me too. Really, it feels a bit of a ‘sweet spot’ book – intended for those not too young, but not too old, and for those interested in and fans of Who, but not too interested. Even so, I can see the repetitive and exclusive use of rhyme – and more visibly, the repetitive use of similar rhyme schemes – grating against readers even half my age and with very different outlooks on poetry.

It’s at this point, however, that I feel obliged to offer a sizable caveat to my criticisms: they might not really matter. If it’s meant to be a book that takes those mid-childhood fans of Who and offer a gateway into the world of poetry – a introduction only, rather than a statement unto itself, as Goss implied above – then it works perfectly, and the illustrations in this regard reinforce the connections to the mythology. It shouldn’t really come as a surprise that RTD has a talent for rendering images of the shows past and present in simple, but energetic quality, but they do elevate the work on the whole.

Viewed through the prism of an introduction to poetry, I can almost accept the fact that large swathes of the book are simply Who-themed versions or variations of existing, and variously famous, poems. For example, ‘The Three Foxes’ by AA Milne becomes ‘The Five Doctors’. Despite an opening line that simply switches ‘Once upon a time there were three little foxes’ for ‘Once upon a time there were five little Doctors’, it’s not an exact replica. But there are just about as many of these ‘old made new’ repurposings as there are original works, and the ubiquity of voice and tone that comes from taking existing works and simply adding in bits of Who here and there is all too visible. I said above that I can almost accept the intention, and a large element of that ‘almost’ is the fact that as far as introductions to poetry go, it ends up a rather narrow one.

Goss’ contribution and efforts towards the book might be admirable, but he admits himself in his author’s note that this is “his first (and probably only) volume of poetry”. In which case… why him? Or less menacingly: why only him? Given the cross-generational, near-global impact and reverence for Who, there are surely legions of published poets – young and old, new and established, British and international – who could have all been brought together to form a diverse publication featuring a whole host of approaches and voices. Type in ‘celebrity Doctor Who fans’ on Google and you’ll find a list sprawling with public figures, from Stephen King to Frank Skinner to Iron Maiden. I understand the intention behind Now We Are Six Hundred, but wouldn’t it be so much more interesting and innovative to bring Goss together with all of these talents and let them each provide material. Perhaps, as with so many things, I’m overthinking it, but who knows.

Blue sky thinking aside, Now We Are Six Hundred has arrived just in time for National Poetry Day (28 September), and it fits the release date, in a good way. It might not be the developed symbiosis of Who and poetry I had hoped for, but as a Who-themed poetry introduction for a younger demographic, it would quite probably do the job rather well.