The final stanza of T.S. Eliot’s ‘The Hollow Men’ remains, even now, among the most over-quoted set of lines of poetry that exist. “This is the way the world ends, not with a bang but a whimper.”

It’s an ending that presents a study in anti-climax; the end doesn’t come with fanfare and foreboding, but instead sneaks in through the backdoor in the middle of the night. There’s an irony in noting the over-usage of the lines, before duly using them myself. But they feel strangely appropriate to the end of Star Trek: Discovery’s first season. Or at least, those lines were the second thing that popped into my head once the credits had rolled; the first was the word ‘really’ with a great big mental question mark beside it. The Discovery finale was the last leg of a 15-episode marathon of anti-climax and suspended disbelief, so at least in that sense, it was consistent.

Thanks to the unsurprising heroism of Michael and crew, this was the way the world didn’t end, and there certainly wasn’t a bang in sight. Who knew saving the world could be quite so dull? Somehow, the show contrived to have an attempted genocide pivot into not just an end to a vicious war, but also as the key to the peaceful reunification of the Klingon tribes. Who, as the show has kept trying to insist, are scattered and disparate, fighting each other as much as they’re fighting the Federation. Sure, they are apparently organised enough that they can stage a nearly-successful raid on Earth, and we haven’t had any evidence of their in-fighting since the first couple episodes, when Prime Georgiou was still alive, but why let narrative consistency or logic get in the way of drama? Or at least, attempted drama; there’s that whimper again.

I can’t help but think that, honestly, the show might have been far better off if the season had ended with the bang of Qo’noS erupting in flames. It would have been a rather bleak cliff-hanger, and wouldn’t have solved the myriad other problems with the show, but at least then it could commit to the total and utter disregard for the Star Trek canon, and for its own internal consistency that’s been displayed so far. 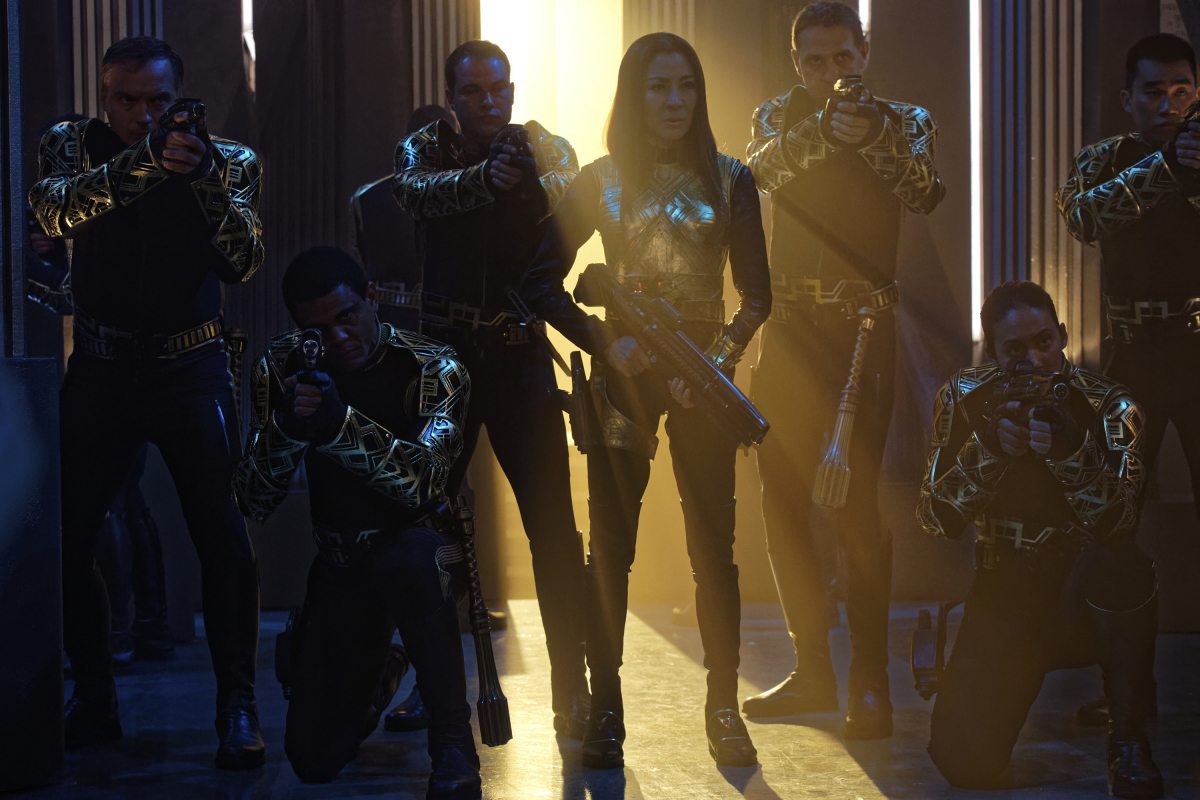 I don’t particularly want to spend thousands of words ranting, from a Trekkie perspective, about the disregard for canon. Not all fans – or at least, viewers – of Discovery will care about the mythology that it’s meant to be part of. But there’s still the question of… why? Why set the show about 10 years prior to The Original Series – and roughly 100 years after Enterprise, incidentally – when Discovery seems so ill-suited to that moment in the timeline?

There are answers to this question; Discovery was originally meant to be an anthology show, with future seasons leaving behind these characters and venturing into later moments in the mythology. That idea was shelved at some point before Bryan Fuller’s departure. Co-showrunner Aaron Herberts, meanwhile, suggested that setting Discovery “100 years after Voyager” would have made the canvas “so broad”, and that it would have meant “creating a whole new mythology”. Well, yes… but isn’t that a good thing? It would certainly have been more interesting than what we ended up getting, a show suffocated by the lack of breathing room afforded by the close proximity to TOS.

Season 2 is set up to explore this issue, with the appearance of the Enterprise, and Pike, at the end of the finale. But any answers or solutions found here either don’t solve the inconsistencies that exist, or handicap Discovery’s own narrative development. A fix to how Spock never mentioned Michael, his adopted older sister – who, as the lead on the show, will presumably continue to write her name into the history books of Starfleet as Discovery wears on – is unavoidably problematic. Either Michael and Spock meet on the Enterprise in season 2 and stick a middle-finger up at the canon, or some way is found to revert to that same canon, and Michael is wiped from Spock’s mind; that though, would undermine the characteristic point of their connection in the first place.

Ultimately though, none of these mythological problems would matter if the show was strong enough on its own. But I’m not sure it is. So many of the flaws I highlighted at the halfway point of the season continued into the second half of the run. Indeed, looking back at that article, I was amused by my mention of Lorca “not being an anti-hero so much as a very thinly veiled antagonist” – funny how that turned out. Lorca’s death itself was a bittersweet moment for the show. Mirror Lorca had run his course, but it was portrayed in the sort of way that shows do when it’s not really the last time you’ll see them. When big characters die big deaths, there’s usually a bit more time given over. Instead, Mirror Lorca is killed by Mirror Georgiou, tossed into the big-‘ol glowing orb of power and death, and that’s that. Maybe we’ll get Prime Lorca back, but if that was going to happen beyond it just being a pointless cameo, it would have happened before the end of the season.

Even though losing Jason Isaacs is never a good thing, at least the vacuum Lorca left meant that finally, finally, the less prominent members of the Discovery crew actually got some lines. I do mainly just mean ‘some lines’, but it’s a start. I remain faintly hopeful that season 2 will at least have Keyla Detmer, Joann, Airiam and the other characters on the next-rung-down of the cast promoted to the main credits, and given something to do beyond those endlessly annoying ‘dramatic look off camera’ shots that appear whenever something dramatic happens. Michael tries to catch out Mirror Georgiou on the bridge; cut to Joann looking nervous! 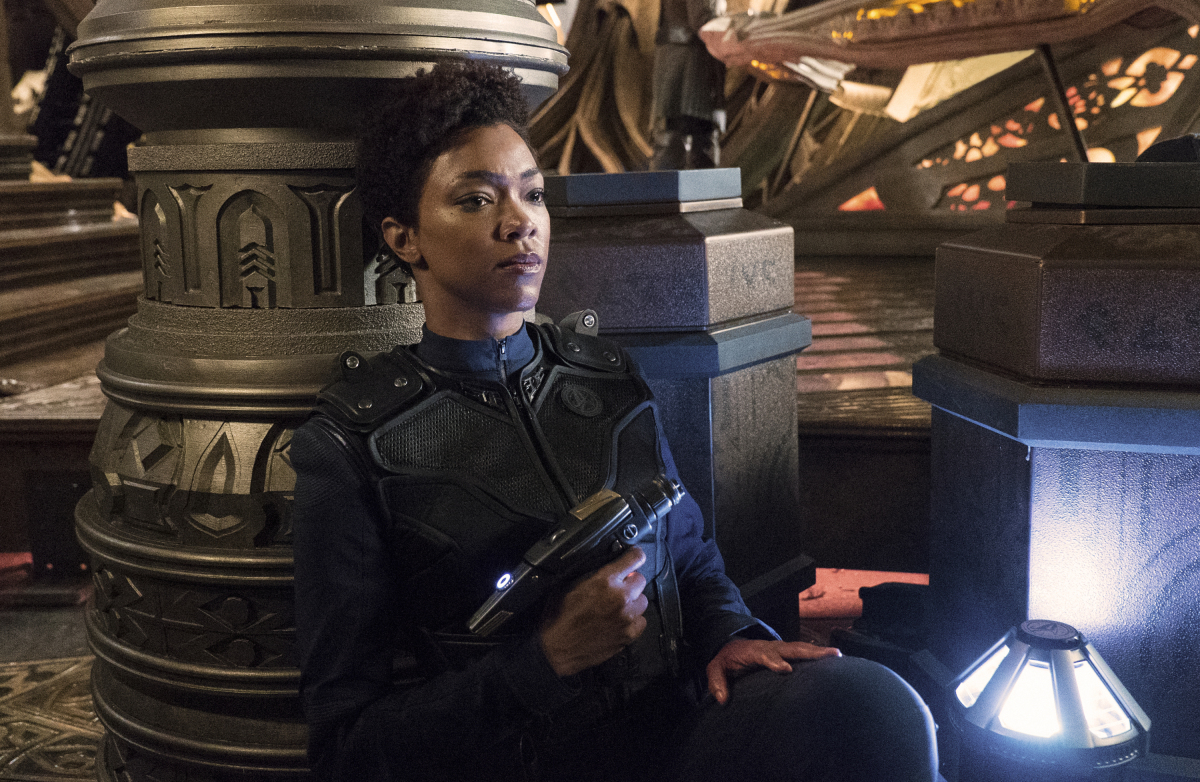 The main characters didn’t really go anywhere, either. Michael is the same drab character who has been engulfed by guilt since Prime Georgiou’s death, a perfect fit for a show that refuses to have anyone have the slightest bit of actual fun in situations that aren’t specifically designed for the main plot. That is, apart from the trademark moments of Tilley kookiness, which are about as artificial and signposted as Saru’s persistently ridiculous “I sense the coming of death” superpower. Saru himself remains the most entertaining character around, because of how impenetrable his friendly-but-serious-bureaucrat routine is. Nothing – not his soon-forgotten frenzy on Pahvo in the mid-season finale, not the discovery that the mirror version of his species are a Terran delicacy, not the reveal that his captain was actually a Mirror Universe traitor, not having to play along with Mirror Georgiou pretending to be the Prime Georgiou – could break him. Michael’s lack of change felt like stagnation; Saru’s felt like definition by inaction.

Stamets was gifted – and I use that word sarcastically – the only gift an openly gay main character can apparently be given: a totally-not-worn-out-at-all Bury Your Gays plot. Which meant a stilted and abrupt murder of Dr Hugh Culber by Ash/Voq, of course. Not only did it turn a positive form of representation into one of the oldest tropes in the book, but it also meant yet another second-tier character was kept from reaching the promised land of actual relevance. Despite being the Chief Medical Officer in a franchise that has, traditionally, had the ‘Doctor’ be a staple part of the crew – from Bones to Voyager’s Emergency Medical Holographic program, aka, The Doctor – Culber was a largely incidental character when he was alive, only ever part of other storylines, rather than possibly having his own. Once he was dead, his true purpose as a Mycelial guide for Stamets was revealed… and what’s that sound? Oh, it’s my head smashing into a table.

The problem with Discovery… Well, the problem with Discovery is that the sentence starter ‘the problem with Discovery’ inexorably crops up in every single damn conversation about the show. There are so many problems, covering so many different aspects of the show, that it’s inconceivable that conversation won’t turn to one of them. The setting. The characters. The narrative developments. The way the setting, the characters and the narrative developments mesh together about as well as a Nutella and pesto sandwich might. Finding your way towards one of the few positives that exist is like wading through quicksand. Slowly, surely, you’re sucked into the mire of mediocrity that has pervaded this first season.

Even phrasing it like that is more than a little contentious. Is it really just growing pains? So many of the problems with this first season have felt systemic, structural, embedded; problems, essentially, that won’t magically go away when the show ticks over to season 2. It says a lot about the show that the best moments have just been the most exciting ones, and have indeed been mere moments; the reveals of Mirror Lorca and ‘Emperor’ Georgiou, and so on. It’s the kind of drama that The Walking Dead has been driven by for some seasons now, a soap-operatic notion that developments only matter because they’re shocking, or because of the sense of ‘what happens next’, rather than because they might be part of wider themes, ideas and narratives that have something to say. That’s what Star Trek has tended to at least try to be about over the years, even when it’s failed to reach the mark. But more importantly, it’s often what the best kind of television is about.

The whole point of this current age of television is in exploiting the long-form medium to tell longer stories with due diligence. A narrative that would be condensed to about 90 minutes on the big screen, can be told over potentially 10 times that on the small screen. But it’s hard to grasp that sense of a wider plot with Discovery. Taking in the whole season, the wider plot is just that a war between two spacefaring Empires can be solved in about 5 minutes by giving the detonator to a Klingon representative, so that she can threaten to blow up her own homeworld. As I said at the start, perhaps it might have been more interesting if she had followed through on the threat.