Like, love or loathe the new Star Trek, the past eight weeks of new episodes have flown by pretty quickly. That opening two-parter with Michelle Yeoh as Captain Philippa Georgiou, the original commanding officer against whom Michael Burnham mutinied? Seven episodes ago. After what seemed like an age, Ash Tyler finally made an appearance (or did he? We’ll get to that in a second) in episode five. That was four episodes ago. And this feeling of the season thus far passing in a blur comes during what has been an extended opening half, with the ninth episode, ‘Into The Forest I Go’, originally slated to be the mid-season premiere in 2018, rather than the mid-season finale this year.

Is this blink-and-you’ll-miss-it feeling just me, or something embedded in the show’s pacing? It’s hard to tell, and it’s equally difficult to determine whether it’s a good thing or not. There’s often value to TV – and films – that wash over the viewer in a mad rush of adrenaline and frenetic action, over before you’re really aware it started. Maybe that’s what Discovery is going for, especially in a season that so far has had interspecies war at its core. There are ways to ‘do’ war that shy away from the action, and focus heavily on the choices and consequences of conflict, but Discovery has veered directly into the action across the first nine episodes. It’s hard to do that, and to place such significance on the importance of ‘doing battle’ over diplomacy, subterfuge and manoeuvring, without sacrificing at least some depth and exploration.

That, to me, feels like a problem for a Star Trek series, even for one that has tried to reinvent itself to fit into the modern era of glossy TV. Having started the season thrown in the deep end of war, that’s where we’ve stayed since. Sure, there have been a few detours involving a new (though preceding) version of The Original Series’ Harry Mudd, and the original mid-season finale, episode eight, which was mainly set on the planet Pahvo, but even they have been tied in some way to the Klingons, and to war. To have a season revolving around conflict can make for compelling, fascinating, and often intelligent television; ideally, though, the ‘war season’ comes later in the show’s run, once everything else – the universe, the core cast, the themes, the narrative rules – has been established. But by making its first season about war, Discovery has made all of those elements wholly reliant on the war, their very existence on the show tied to the conflict. 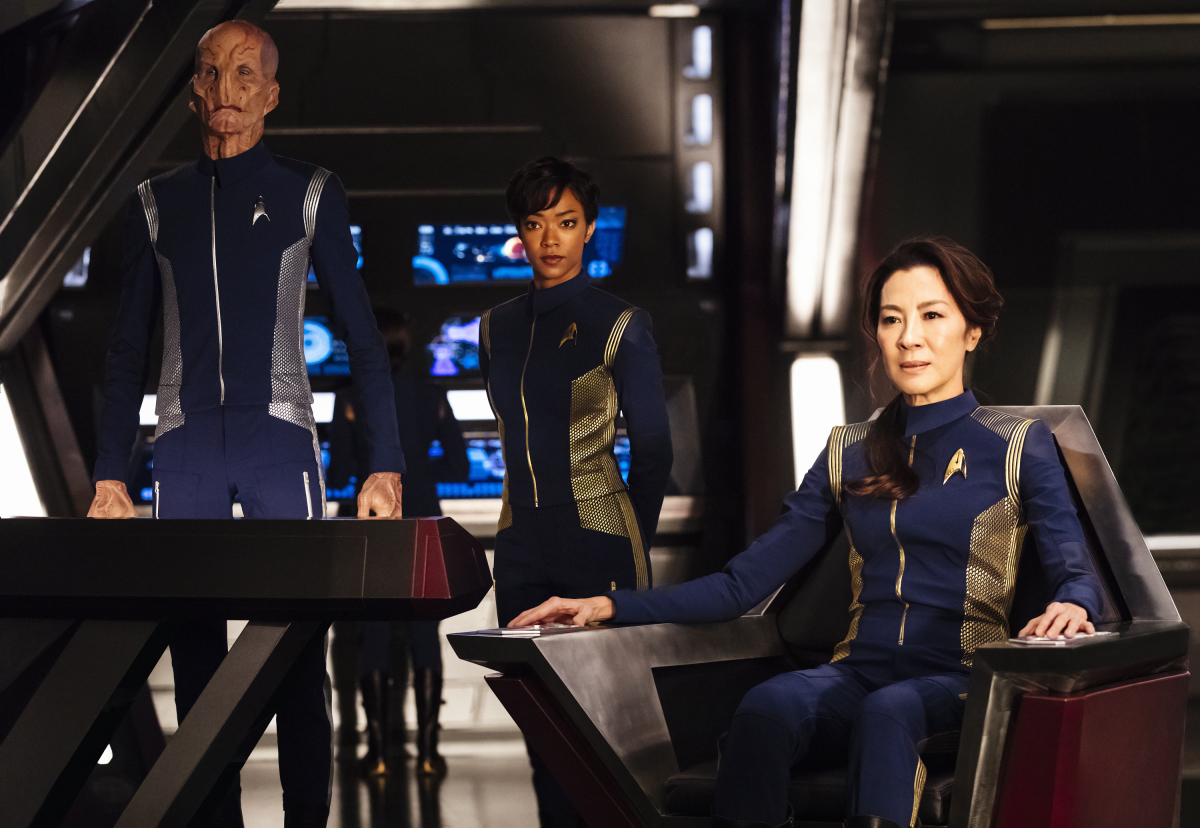 This kind of approach worked brilliantly for the rebooted Battlestar Galactica, because it held that focus from the start right until the end, because it took its time when it came to ‘big’ moments, and because it had the space to breath narratively without being tied to a pre-established future. Discovery can’t do any of those things because of the nature of the show, but more importantly, it’s not trying to either. The Georgiou arc that formed the opening two-parter could have more effectively formed the entire first half of the season, with Lorca and the Discovery only entering the fray after the mid-season break. The encounter around Pahvo, and the subsequent universe-shifting jump that occurred in the aired mid-season finale, could have become the season finale.

There’s also a question of whether it should even want to be like BSG, because after all, as the name implies, this is a show that’s supposedly meant to be about exploration and… discovery. It isn’t Star Trek: That Klingon War that apparently happened ten years before The Original Series Klingon War you already knew about (I know, catchy right). It’s a show called Discovery, but one in which all we’ve really discovered so far is: wildly out-of-canon technology, Saru’s convenient evolutionary trait which senses danger and ‘the coming of death’, and war.

The narrative impact is obvious; more significant, especially for a Star Trek show, is the impact on the characters. At this point, there’s simply no ‘baseline’ for pretty much anyone, Michael included, and aside from her, everyone else only really appears when they’re needed for overarching narrative purposes. Even then, whether these events actually feed into their characterisation fluctuates depending on what the writers fancy; Saru is defined by his antagonism towards Michael for her mutiny and Georgiou’s subsequent death, but his deterioration and ‘issues’ on Pahvo, where he nearly killed her and Tyler, seems a non-issue by the end of the episode.

Lorca doesn’t seem to be an anti-hero so much as a very thinly veiled antagonist, given both his motive and means are both incredibly suspect. You would think that Stamet’s taking the Tardigrade’s place as ‘travel interface’ (or whatever you want to call it), would be a big deal, and be more than just a routine adjustment of ‘ok so this is how things are now, we’re just strapping one of our officers into an isolation chamber and zapping him to get from A to B’. And it becomes a big deal… just in time for the old ‘one last mission’ trope to kick in, before the Discovery jumps to places unknown. 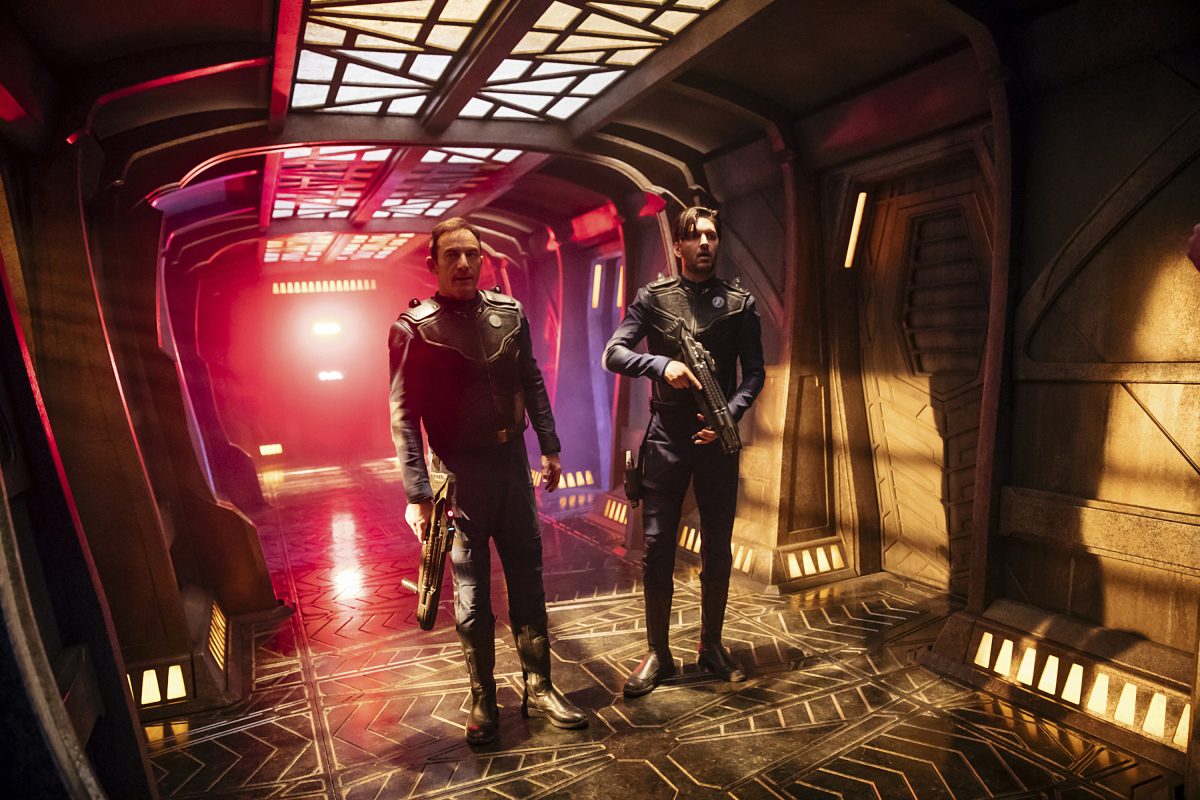 That’s just the main cast; beyond them, characters barely even appear, let alone speak. I’ve remained perplexed throughout the run so far at quite why the Shenzhou Helmsman, Keyla Detmer, was made to crop up again on the Discovery as their Helmsman… only to have about three scenes since, one of which is a high-school cafeteria scene of her looking at Michael with contempt in the mess hall, and one of which is just her getting off with someone at the episode six party. Hugh Culber, the Medical Officer, appears a bit more, but largely to act as a romantic and sentimental foil and emotional reference point for Stamets, than to provide a medical presence on the ship.

As for the rest of the bridge crew, they’ve even less development. Judging by the inconsistencies, the writers themselves don’t actually know what species Airiam – the robot-looking officer – is meant to be, having gone back and forth between her being an ‘alien’, an ‘augmented alien’, or an ‘augmented human’ on various occasions between interviews, Twitter and After Trek.

Meanwhile, the whole cast – big and small – suffers from the relentless narrative-heavy emphasis. We aren’t seeing characters we already know about going to war, a development that would allow the viewer and the show to explore how each character copes when thrown into such a situation. Instead, we’re simply seeing war characters, at war, because that’s all they’re there for, and all we’ve ever seen of them. There’s no contrast, no depth, no idea of who’s coping, who’s adjusting or who’s struggling. There’s just… this.

And then there’s Tyler, who – for those who’ve been keeping up to date with their conspiracy theories – might not be ‘Ash Tyler’ at all, but rather, the Klingon Voq, last seen travelling to the ‘Klingon matriarchs to sacrifice for the cause’, having undergone augments to look human. There’s a few things that support the idea; TOS episode ‘The Trouble with Tribbles’ has already done ‘Klingon pretending to be a human’, so the concept is there; Shazad Latif – the actor playing Tyler – was originally cast as Voq, back when ‘Voq’ had the name ‘Kol’, before ‘Kol’ became the name of another Klingon. Tyler is of course only introduced in a Klingon prison, immediately bonding with and gaining the trust of Lorca, while having a strange (for a human) relationship with L’Rell, who herself was the sole ally of Voq. And to top it all off the actor now listed as playing Voq, Javid Iqbal, has Discovery as the sole acting role of his career, and no pictures exist of ‘Iqbal’ that don’t have him in full Voq makeup and prosthetics, while the attempts by Latif and Jason Isaacs to downplay the theory seemed very lightweight and awkward in this Radio Times article. 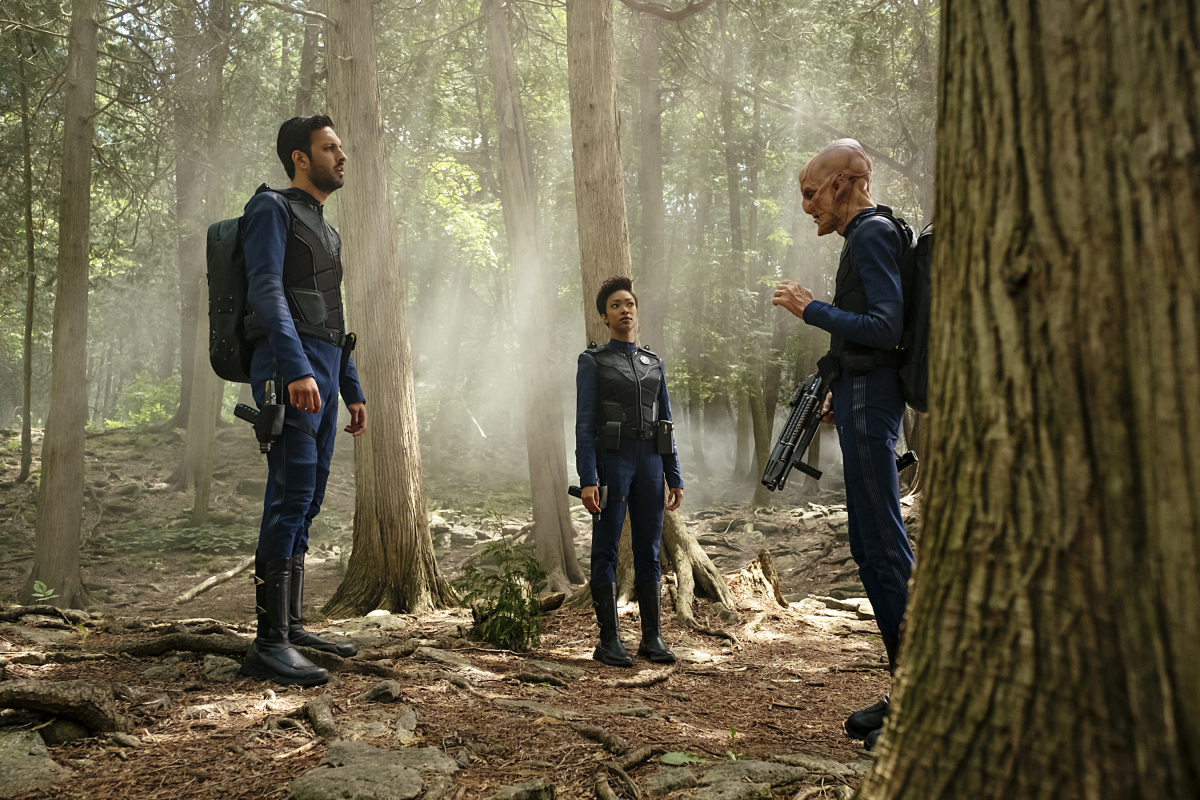 The importance of the theory isn’t so much in the potential for a twist – that’s now potentially been thoroughly ruined by the power of the internet – but that if it is true, Tyler becomes yet another character whose very existence is tied to the main narrative. If he really is a Klingon who was made to look human, and had his memory wiped, only for it now to slowly come back to him, then his romance with Michael, and every detail about him, is only there to setup for that twist. If it isn’t true, then perhaps we’ll have a character who can have a bit of personal development, as we explore how he deals with his apparent PTSD. But then that’ll probably just vanish once it’s needed to.

The thing is, that after all of these flaws, Discovery can be enjoyable in a Trek kind of way. It’s not one of those shows that you find yourself inventing excuses for to avoid admitting to yourself and others that it’s crap and a waste of your time. It’s not. There are strong themes floating around – can you come back from a choice like Michael’s mutiny; the ethical overlap between scientific innovation and military exploitation; the role of honour within Klingon morality – but those themes are just floating around. That’s all they’re really doing, without a lot to tie them down. The dialogue isn’t terrible; it’s rarely of the quality that makes you forget it’s a show, nor is it the kind that can cause a scene to take your breath away, or any other superlative clichés, but it’s nowhere near as bad as some shows. And the aforementioned cast isn’t bad at all, just underdeveloped. The problem isn’t the characters themselves, but that we haven’t seen enough of them being themselves.

Ultimately, Discovery’s problems aren’t terminal, but are a case of consistently choosing the worse of two options. They chose a single protagonist – Michael – over a more ensemble focus. They chose – so far – a singular ‘enemy’ plot over initial exploration as the way to start the show off. Most glaringly, they chose to set the show between Enterprise and TOS, rather than place it after the Dominion War of Voyager, so that while it’s the newest show in our timeline, it’s hemmed in on both sides within the show’s timeline. But if the show learns from its mistakes – expands the focus to take in more of the cast, finds intelligent explanations for the chronology, focuses less exclusively on the Klingon War – going forwards, it can become a show to stand alongside it’s Trek predecessors. Otherwise, it’ll become a sadly missed opportunity.