With the TV landscape more crowded than ever, new shows need to throw everything they have at their opening episodes to keep viewers entertained. The Pilot Project is an exploration of television pilots, and whether they do enough to tempt you to watch episode 2 and beyond.

Pilot episodes are hard to judge, but judge we must. Charmed, new and improved, not original recipe, has potential. Conceptually, a series about three diverse witches fighting demons and the patriarchy ticks a lot of the forward thinking boxes that you’d want to see, and it delivers on that. How it delivers that, however, is the real issue.

Though the dialogue is stilted and far too direct at times, the series is initially likeable. There’s a particularly emotional moment where the sisters bond over footage of their mother, someone that secret sister Macy never knew, and you get a sense of the heart within the show. Equally, there are some cool monster moments and special effects that look pretty good for a TV show. But for every good point, there is a bad one. The telekinesis effects are highly questionable (it should be the easiest active power to show) and the demons don’t scream originality or feel particularly exciting.

The real crux of the show is summarised in the first five minutes with the long, goodbye-esque speech from mother Marisol (Valerie Cruz). She insists on telling her daughters to stick together, be strong with one another etc, all of which feels like a clear setup as she dies moments later. The reasoning behind her choices in her final minutes don’t make sense yet, so I don’t want to question her texting her daughters as she dies by crow (?) and then starts to unlock her daughters’ powers. It all too convienent. I’m comparing this specifically to the original Charmed series which had their grandmother die unexpectedly, leading her granddaughters to discover their powers a bit more organically.

Macy (Madeleine Mantock), Mel (Melonie Diaz) and Maggie (Sarah Jeffery) are our three Charmed Ones, each with a different power-set, personality and reason for wanting (or not wanting) to start fighting demons and saving the world. While Mel and Maggie have grown up together, their older sister Macy arrives in their lives by magical chance, introducing herself as their older sibling. 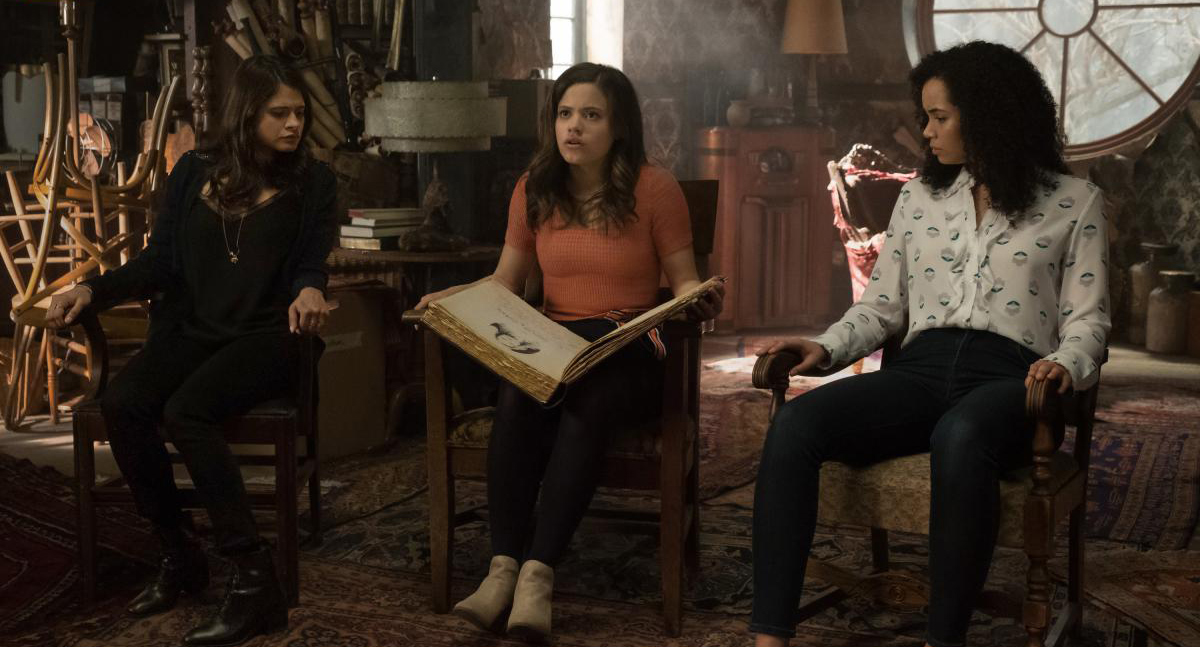 Macy might be the most immediately likeable of the three. She’s a scientist and wants to get to know the relatives she didn’t know she had. If this were a lost sister story, she would make a compelling lead. Mel feels like the show’s token lesbian. She’s a feminist and a graduate in the women’s studies department, with a detective girlfriend. In comparison to Maggie, who is set as her opposite, it feels like every time there’s something progressive to call out, Mel will have to be the one to do that. It’s Mel against the patriarchy; which, incidentally, also makes her someone who’s easy to root for.

Speaking of the patriarchy, let’s talk about the men. Men are literally the villains of the piece, everywhere. And if they aren’t literal demons, they are really creepy or condescending. Harry (Rupert Evans) is the girls’ whitelighter, aka guardian/guiding angel, and he is awful. Granted, you get a hint of something more near the end, but he makes himself head of the women’s studies department. Mel calls it out, but it’s still a plot point and it doesn’t feel like it needs to be. Meanwhile, Maggie has a love interest/male friend who silently stalks her while she walks through the forest at night. And let’s be honest, if Maggie was a modern woman, she would not walk through a creepy, dark forest in the middle of the night, no matter how much she wants to join a sorority.

There’s also a sexual harassment storyline that is part of the narrative for the first episode that feels very on the nose in the current political climate, and the victim is an asian woman which feels a bit problematic. Race in particular has a red flag on it for the series, given that it was marketed at times as a latina sisters story, though the actresses are not all latinx. In fact, only Diaz, who plays Mel, identifies as latina. To be fair to the actors, Mantock identifies as Afro-Carribean and Jeffery identifies as African-American, and they have been clear on this.

Whether you were a fan of the original show or not, this pilot episode is entertaining in places. But it’s not really enough to make you want to continue watching it. Although, if you do, there’s a chance that the tendrils of potential will turn into big Cthulhu tentacles of fun, witchy drama. If you want a spiritual successor to the original Charmed though, you’d be better off watching The Chilling Adventures of Sabrina.