With the TV landscape more crowded than ever, new shows need to throw everything they have at their opening episodes to keep viewers entertained. The Pilot Project is an exploration of television pilots, and whether they do enough to tempt you to watch episode 2 and beyond.

Titans might be another superhero TV show in a long line of comic book shows, but unlike some of the offerings out there, it balances intrigue and story with bright costumes and interesting superpower effects. Like the hit animation series Teen Titans before it, this could be one of the best shows to come from DC.

All eleven episodes of the show were released globally on Netflix at once, whereas in the US it streamed weekly. Lucky for those outside the US because this show feels bingeable. It balances the darker physicality of Daredevil with the anticipation of a mixed group team-up, as in The Defenders.

In this first, fifty-one minute episode we get a great taste for each of the four core characters, though Beast Boy / Garfield Logan (Ryan Potter) is only teased in the epilogue. It’s smart to pace out these introductions, instead setting a good foundation for the series rather than trying to get everyone in at once and leaving the viewer unsatisfied.

The main storyline follows Robin / Dick Grayson (Brenton Thwaites) as he meets Raven / Rachel Roth (Teagan Croft). Both have troubled childhoods, for different reasons, but are drawn together by chance and a little bit of Raven’s dark side. Thwaites is a treat for the eyes as Dick, who’s working as a detective in Detroit by day, whilst moonlighting as Robin. There’s an amusing scene where he goes to take out some bad guys and on sight of Robin they all start searching for Batman, assuming he must be there and is the real threat. Robin proves them wrong on both counts. 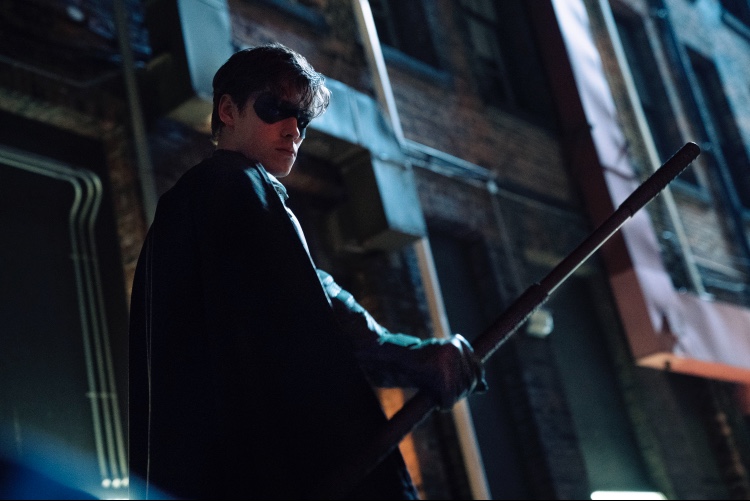 The use of effects for Rachel’s demonic side are well executed. Seeing her possessed-eyed reflections, glimpsed in water and fragments of glass, make it feel all the more eerie. Rachel, like all the characters, has a comic book influenced costume that borders on the ridiculous. For example, she has a hood that has a point at the front, as though it’s a bird’s head, which was the signature of her character in the comics. Here she looks like the best dressed teen goth imaginable.

Of course, no-one can match up to Starfire / Koriand’r’s (Anna Diop) outfit for this premiere episode. It’s a purple dress and boots combo with fur wrap that seems decadent and powerful and very much the grown up version of what Starfire would wear. There was some initial controversy in casting a black woman as the alien character, so having Diop be so excellent in this role, and look so great doing it, should put those naysayers in their place. Her storyline focuses on her trying to figure out what she’s been up to, suffering memory loss from a car accident, and realising she’s searching for Rachel. The effects in one scene where she gets to let loose with some of her abilities is really fun, with great effects for a TV show. She’s the Phoenix we deserve. (Sorry not sorry Dark Phoenix).

The action on Titans is good, with the fight scenes, at least with Robin, being akin to Daredevil in their brutality, making the series feel grounded. It certainly wouldn’t be a DC show if it didn’t lean into the darker elements of the superhero genre. However, it’s balanced and it doesn’t feel bloody for bloods sake. It feels kinetic, interesting and, most of all, super.

How the Titans finally unite to become a team will hopefully be shown in this first season, and for those who end up loving it, there’s already a second season commissioned. But even with just this first offering, you’ll want to come back for more.