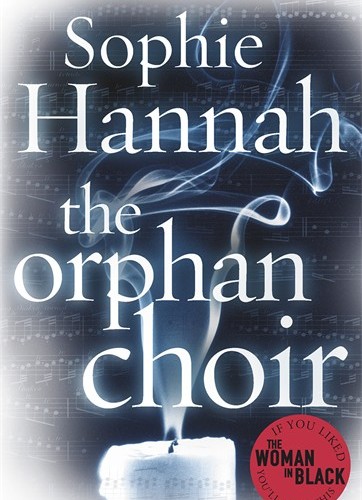 Sophie Hannah’s The Orphan Choir is the latest offering to come out of Arrow Books’ partnership with Hammer Films, the company behind the adaptation of Susan Hill’s horror The Woman In Black. Following a woman who’s haunted by choir music only she can hear, the story is not so much of a ghostly horror as it is psychological drama or, at a push, a tame paranormal thriller.

Louise Beeston is a seemingly ordinary woman, who’s overwhelmed at being separated from her son, Joseph, whose remarkable singing voice has gained him a place within the acclaimed choir at Saviour College. His commitment to the choir means he must board full-time, only returning home within the holidays and Louise struggles to deal with this detachment, believing it reflects badly on her as a mother. Louise is also plagued by her noisy neighbour, Justin, who likes to play music, specifically Queen, until the early hours of the morning. When Louise starts to hear choir music, she thinks Justin’s trying to purposely antagonise her, until she realises that he doesn’t own choir music and she’s the only one who can hear it. What follows is the unravelling of woman as she struggles to identify why she’s hearing this music, who it’s coming from and how it relates to her son.

Whilst The Orphan Choir was an enjoyable enough read at the time, it failed to make a lasting impression. The main problem is that the story takes an achingly long time to get started. Exposition plays a massive part in the first three quarters of the book, with the ghostly element only coming into play at the end. The paranormal ‘orphan choir’ seemed brushed over – an afterthought rather than the driving force – and as a result the story failed to have the desired ‘scary’ effect.

Rather than ever believing that Louise was tormented, she came across as simply neurotic. I felt as if I should’ve empathised with her, what with her detestable neighbour and her son being away at boarding school, but her frantic manner grated on me. Joseph being at Saviour’s wasn’t punishment, it wasn’t compulsory – plenty of children go to boarding school nowadays – and yet she acted as if she was the only mother to ever wave goodbye to a child. I wanted to give Louise a swift slap round the face rather than give her any sympathy. I’m sure this is not what Sophie Hannah had intended and it also takes away from the more pressing issue of the invisible choir.

It’s a shame that the confused genre and weak protagonist slowed the story down because Hannah’s writing is very easy to read. She has a natural quality that makes you want to read on, even when it feels as if she’s taking you down a dead end.  There was a glimmer of something really intriguing in The Orphan Choir, the last chapter was actually very exciting but it arrived too late to save the story. A nice, tame ghost story for those who like their scares on the gentle side…major horror fans need not apply.