When Nora (Jessica Parker Kennedy) arrived, The Flash didn’t waste any time setting up an animosity between the young West-Allen and her mother, Iris (Candice Patton). The Flash also doesn’t waste any time postponing the reason for this conflict as ‘News Flash’ speeds into some good old-fashioned family drama.

The reason and the resultant conversation are suitably emotional with both actors bringing the right amount of stubbornness and self-justification. In other words, it’s exactly like watching an argument between your mum and your sister, especially after your sister finds out your mum has been tracking her movements with Find My Friends.

When you’re building towards this type of scene, it’s natural your script will show these two characters attempting to bond — they must want to connect for the reason to have impact. Starting off with a breakfast montage set to Cyndi Lauper’s ‘Girls Just Wanna Have Fun’, ‘News Flash’ guarantees a good time as the show tries domesticating this superhero family. Iris cooks a terrible breakfast in an attempt to bond with Nora before the family attend a charity softball game. Barry (Grant Gustin) is naturally awful considering he has to retain his secret identity. During the game, Iris becomes disgruntled that Nora has a mobile and prefers a rival blogger. 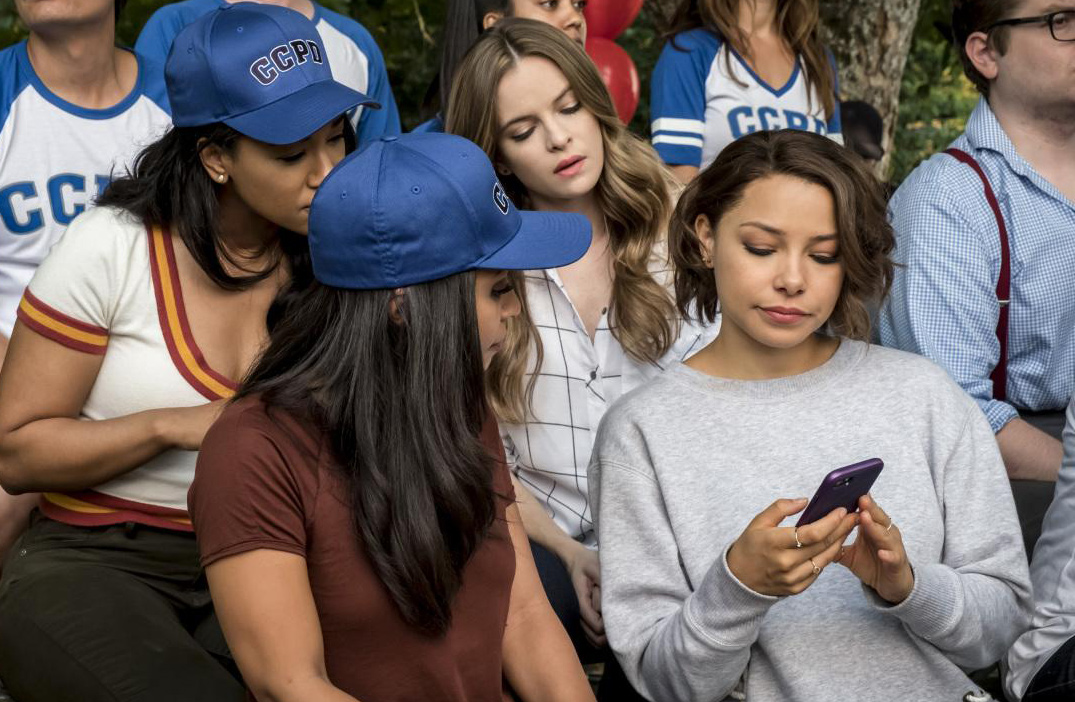 This rival blogger is the villain of the week who controls people through her sensationalist headlines. The pitch side squabble between mother and daughter is a clever piece of writing as it reaffirms their shaky relationship while delivering The Flash’s opinion on real-world issues — in this case, the Scarlet Speedster is taking on fake news. The comparison between Iris, the dutiful journalist, and Spencer, the fame-hungry blogger, makes clear that fake sensationalist headlines can have a deadly impact. Look, it’s an obvious message and is after-school special deep, but at least The Flash is trying to take on some socio-political commentary.

The events of this episode also strengthen the bond between Barry and Iris. Like most fathers who have a blind eye when it comes to their daughter antics, Barry buys Nora a phone behind Iris’s back. It’s a simple situation most parents probably go through, but it reveals the gap between the blossoming parents. Barry, who is quickly becoming the least interesting character in the dynamic, must learn to support Iris. There’s no need to go into Gustin and Patton’s scene work, they’re as stellar as always, and Parker Kennedy has slotted into their dynamic with sincere emotional electricity — some of the scenes in ‘News Flash’ are genuinely moving.

Elsewhere, Ralph (Hartley Sawyer) and Sherloque (Tom Cavanagh) continue investigating Cicada (Chris Klein, still scowling), with Ralph suggesting they find out why he wears a mask. Their partnership is combative at first, mainly due to Sherloque’s arrogance, but the pair start to work together with Ralph’s positivity and old school detective work sparking a bond between the two. They are starting to respect each other, making their future scenes tantalising prospects.