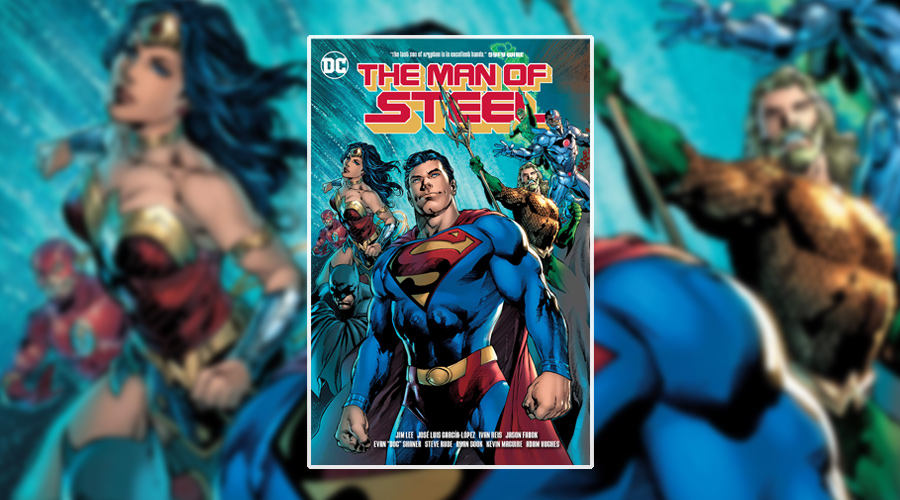 After years at Marvel, Brian Michael Bendis decided to abandon ship and give DC a try, taking his hand to the character of Superman – some would argue the first real superhero. However, as you would expect from a character who’s been around 80 years, it can be hard to find a story that’s not been done. The Man of Steel can at times feel like its hitting old familiar beats, though there’s some new life to be found in Bendis’ perspective.

Man of Steel introduces a new threat for Superman, who sadly feels a bit too familiar and is pretty one note to boot. Rogol Zaar claims to have destroyed Krypton, a feat claimed by many before him, and upon discovering Superman on Earth, is on a crusade to wipe out all Kryptonian life. Zaar is cruel but little else is really revealed about him; he’s just a force that can overpower Superman. It’s a shame that the first threat Bendis has written for the hero feels so bland, and it does sour the story slightly.

However, Bendis’ Clark Kent feels more human than ever. Clark’s family is mysteriously gone and he clearly feels deeply alone. What’s worse, he’s pushing away his friends in the Justice League and his cousin, Kara (Supergirl) – isolating himself even further. Clark is a man in a deep depression and he’s throwing himself into being Superman in a bid to overcome it, but he’s failing. Clark already feels like he’s lost everything of his human life, and then a threat comes along to wipe out his Kryptonian life too. The Man of Steel doesn’t offer any easy answers for him getting over this, instead presenting it realistically.

Bendis chooses to centre the madness of Zaar around a more human level threat – that of mysterious arson cases popping up around Metropolis. This also introduces one of the new characters: Fire Chief Melody Moore, who is investigating the strange occurrences. So far little is revealed about her, but she seems too good to be true in my opinion. At The Daily Planet we also meet a new columnist, Robinson Goode, who is reporting to someone unknown on the goings on at the newspaper, with a particular interest in what happened to Lois Lane.

The artwork is handled by a team, including both up and coming artists and industry greats. The opening short comic (originally printed in Action Comics #1000) features the work of Jim Lee, still one of the best in the business, and is hard to top. There isn’t really any fault to be found in the artwork and the style is mostly consistent throughout, though occasionally faces can seem a bit lifeless. However, the action scenes shine well, particularly a sequence where Superman and Zaar face off on the moon, which makes sparing use of colour effectively.

I was excited for months by the prospect of Bendis taking on Superman, so maybe that’s why the comic is a bit of a let down. Yet there are some good moments (Zaar finding the Fortress is genuinely quite chilling) and Clark feels very well handled. There are also some interesting threads to pick up in the ongoing Superman and Action Comics books, which will supposedly focus on the Superman and Clark Kent side of things respectively. Judging from this miniseries, it seems like Bendis is better at writing Clark than Superman, but perhaps with time he will be able to manage both.