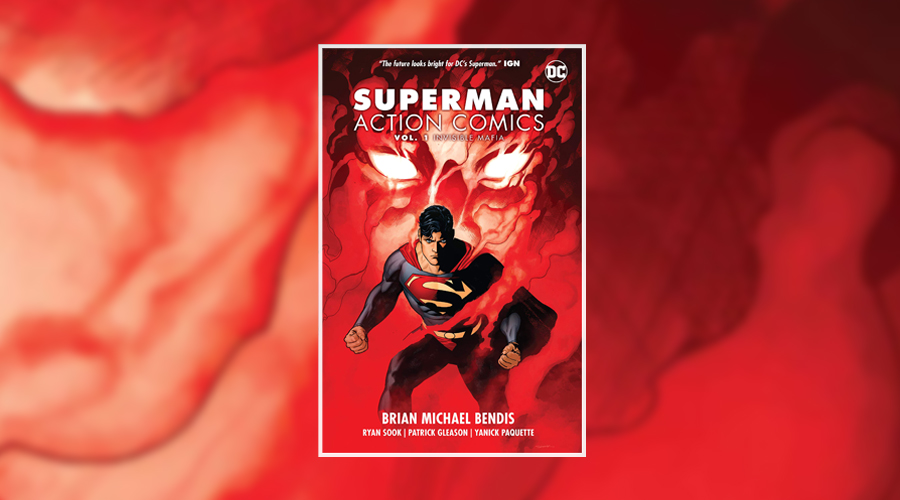 Spinning right out of the Man of Steel miniseries, Invisible Mafia sees Superman come face to face with a new threat, The Red Cloud, who is taking over Metropolis’ criminal underworld. Meanwhile, Clark is struggling in his personal life, with new reporters trying to steal his position at The Daily Planet. To cap it all off, Lois and his son are still in space and Clark is struggling with loneliness.

Despite this being a first volume, it does feel like it would be tough to use this as a jumping on point. You really need to have read Man of Steel to understand the current dynamics with Clark, as well as some of the side stories that introduce many of the new characters.

New foe Red Cloud is interesting, particularly in how the villain can go toe to toe with Superman who struggles to fight an enemy that can become a literal cloud. The character also has ties to his personal life, which make her a different sort of threat, unknowingly hitting Clark from both fronts.

The artists for the series switch between issues, with Patrick Gleason handling the first two, Yanick Paquette on the third, and Ryan Sook on the remainder. Out of the three, Ryan Sook stands out the most, drawing action and quieter moments with a great deal of finesse. Red Cloud also feels best represented in his issues, looking like an actual cloud or mist.

The first arc sets the mission statement for Brian Michael Bendis’ approach to Action Comics, with the series focusing more on the Clark Kent side of the character. Superman’s eponymous series featured him taking on the bigger threats and world ending stuff, whereas this series is more about issues affecting Metropolis and Clark himself. Having read the first volumes for both, and not finding Clark a very interesting character, I didn’t feel as if I’d be engaged by Action Comics. However, I actually found myself fascinated to know what was going on with the character.

Bendis’ approach to the man behind Superman feels fresh, making him vulnerable and very human. He’s going through big changes in his life, at work, at home and in the superhero side, and he’s unsure what to do with it all. I actually want to know what’s going on with his relationship with Lois and how he deals with his new rivals at The Daily Planet. Bendis has always been able to humanise characters; if he could do it to Cyclops (in Uncanny X-Men, one of my favourite X-Men runs), then I guess I shouldn’t be surprised he can make the Man of Steel feel more like an actual man.

As a whole, this is a good continuation of the work Bendis has been doing with Superman over the last year, and I’ll be intrigued to see where it goes from here.