‘The Wrath of Savitar’

‘The Wrath of Savitar’ is, to paraphrase Bad Boys 2, where The Flash’s “s**t just got real”. It is an episode filled with big revelations that are sadly dampened by the exaggerated and inorganic storytelling.

As ‘The Wrath of Savitar’ theoretically ends this season’s second act, everything slowly deteriorates to the point even Barry’s (Grant Gustin) endless optimism is turning into pessimism. The show follows traditional storytelling so this isn’t surprising, but it charts Team Flash’s fracturing with contrived plot points. Wally hasn’t told anyone he is having visions of Savitar, and Barry may have ulterior motives for proposing to Iris (Candice Patton). The Barry-Wally relationship has often been competitive and argumentative. Barry has struggled to mentor Kid Flash, with Wally’s ego often causing more trouble than it should. Here, the scenes build to an emotional ending, even if the writing leading up to this moment didn’t feel natural.

After Barry and Wally’s story reaches its conclusion, the episode delivers some surprisingly horrific moments. There’s no gore or body horror, but the writers present these moments with brutal efficiency. If you like and care for these characters, it can be hard watching what happens.

Whilst the secrets kept by Barry and Wally feel inauthentic, the one Caitlin (Danielle Panabaker) is keeping at least makes sense when calculated with her arc. This season Caitlin has done everything in her power to stop the emergence of Killer Frost. Her actions in this episode make sense, and Panabaker, who is always game, has done a great job at performing Caitlin’s fear and anger. 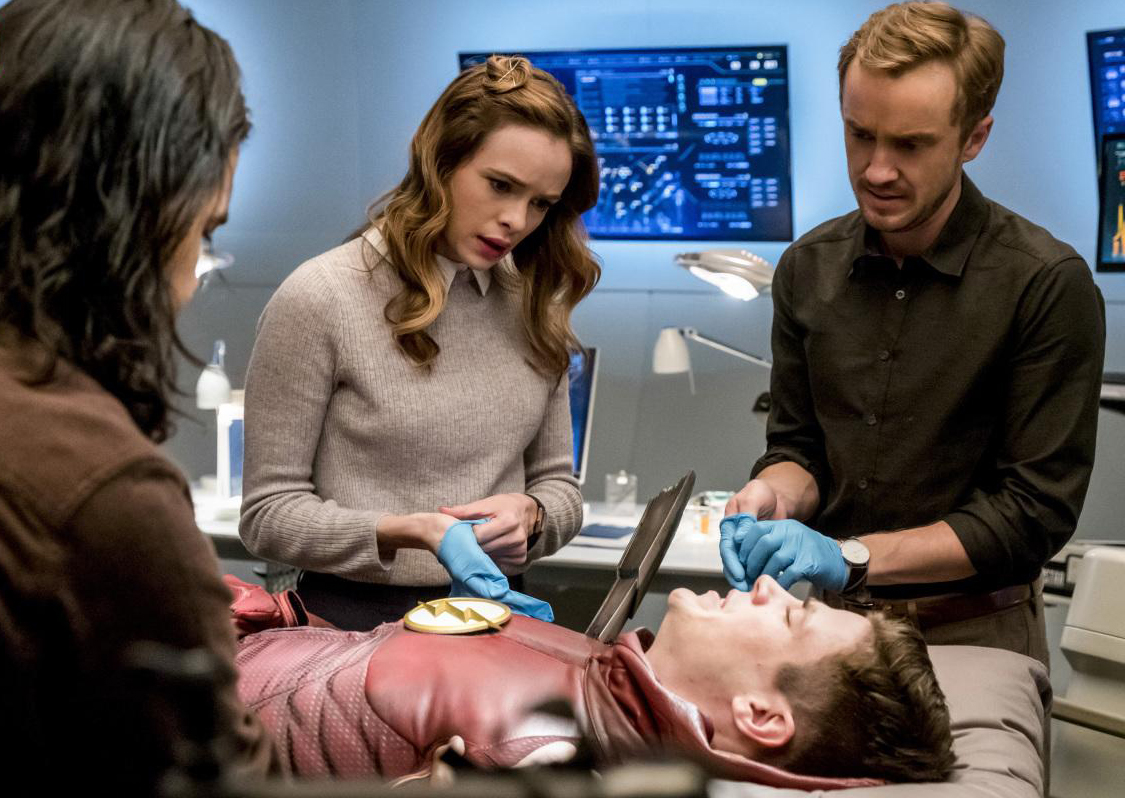 However good the actress is, she more than any other character, has received the short stick when it comes to the writing. Caitlin is often defined by the men in her life. In season one, it was her dead husband, Ronnie. In season two, it was her unwitting relationship with Zoom, the ex she’ll never want to talk about. This season, it’s Julian (Tom Felton), the damaged soul weaponised by Savitar. The good doctor is on a relationship roundabout the writers won’t let her get off of, and it is becoming repetitive. As this episode shows, no number of cutesy encounters can stop a trope from going stale. It doesn’t help that both actors’ strengths lie outside of romantic encounters.

Felton gives his best performance since joining the show. The actor can easily play a snobbish, but gradually sympathetic character. He grew up doing just that. But, it is when Julian channels Savitar the former Draco Malfoy shines. Team Flash, hoping they’ll gain a better understanding of what’s going on, perform a séance to talk to the imprisoned big bad. Felton delivers his lines with a dead-eyed stare. It’s a simple acting choice, but it makes the villain intimidating even though he is trapped for all eternity. Felton, along with the effective music, makes the séance scenes mesmerising.

They also make Savitar more than a physical threat. His motives remain foggy, but now his intelligence, ruthlessness, and personality are on show. He is quite sassy, dismissing Cisco (Carlos Valdes) as “tech-support”, and ribbing HR (Tom Cavanagh) about his usefulness. His scenes are the standout moments from the episode, seamlessly blending horror and comedy, and for the first time, he feels like more than a wannabe villain. The characters no longer need to tell us he’s evil. After ‘The Wrath of Savitar’ we’ve seen it, we’ve felt it.

At the end of the episode, you won’t want the credits to come on screen. You’ll need to know what happens next.