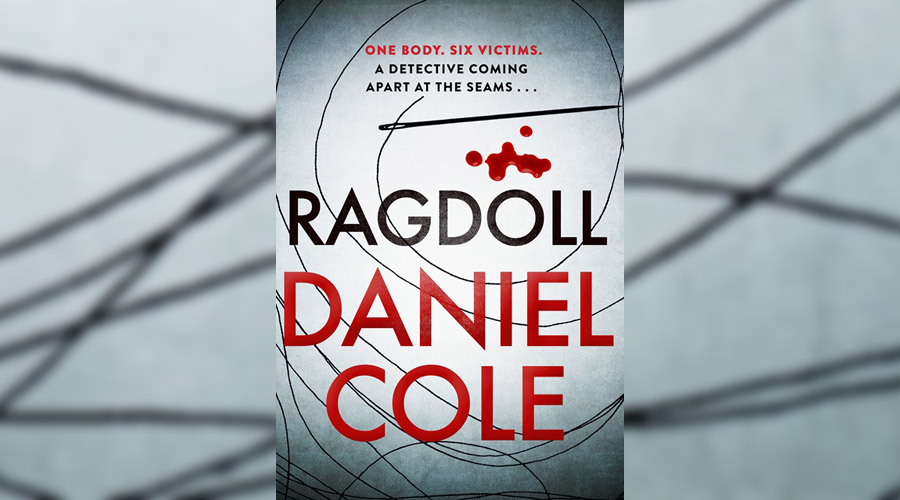 Having won everyone over at last year’s London Book Fair and been translated into over thirty languages, Daniel Cole’s Ragdoll was one of the most hotly anticipated crime-thriller books for 2017. Just a few chapters into this dark and disturbing tale and you instantly understand why publishers were clambering over themselves to snap up this breakout debut.

When a body is discovered strung up in an apartment, stitched together with the dismembered parts of six separate victims, London Met Detective William ‘Wolf’ Fawkes is called in to investigate. The gruesome puppet-like body is quickly nicknamed the ‘ragdoll’ by the relentless and cut-throat press, who are all vying to break the biggest story, even if it means breaking laws to do it.

Investigating the case with the recently reinstated Wolf is his snarky former partner, Emily Baxter, and the overly enthusiastic Edmunds, who’s recently transferred from Fraud. As they begin the initially impossible task of identifying who the body parts belonged to, it becomes clear that there’s a link between Wolf and this particular crime. Not only was the ragdoll’s hand pointing out the window towards Wolf’s crummy apartment across the street, but its head also belonged to a criminal the detective had tried, and failed, to kill in a moment of pure rage years previously.

Taunting the police and utilising the media frenzy surrounding the case, the Ragdoll Killer releases a list of the next six people he intends to murder and the exact dates the crimes will occur. Wolf is the sixth and final name on the list, further cementing his mysterious connection to the killer and making him even more determined to solve the case. Even with this prior warning though, the police are always one step behind, the killer anticipating their every move to ensure his listed victims die exactly when he wants them to.

“He had been waiting for the perfect opportunity: a quiet park, a deserted alleyway, but realised that this was so much better. He was hidden in plain view, a face in the heaving crowds, just another person retreating from the dead body lying in the middle of the road.”

What ensues is a grisly, frantic and publicly broadcast countdown, as Wolf’s already fragile mind unravels and the police fight to catch a sadistic killer who’s targeting convicted criminals and innocent people, as well as the Met’s own. It’s unsettling and utterly gripping, a story that keeps your hands turning the pages even when your mind wants them to stop because of the horrors unfolding.

Ragdoll is a gritty story that draws comparisons to David Fincher’s superb neo-noir thriller, Se7en. Wolf is the broken lead, propelling the tale forward with his hidden link to the killer, but the viewpoint switches between the various unwitting players in the Ragdoll Killer’s sick game – the future victims trying to outrun their demise, and the police struggling to contain the spiralling situation. The detectives make mistakes and the victims pay gravely for them. Likewise the press hinder the investigation in their hunger to grab the most shocking news and gain the highest ratings.

Through all this horror though, there’s a streak of typical British humour that Cole shrewdly weaves into his characters’ dialogue. Whether it’s Baxter’s blunt sarcasm or Wolf’s blatant disregard for his impending doom, the characters can and do find the light when faced with the darkest of situations. It makes catching the killer as important to the reader as it is to the police in the book, and when the assassin does finally reveal himself in the heart-racing climax, it’s a scene that you won’t forget in a hurry.

Ragdoll was published in hardback by Trapeze on 23 February 2017