Most episodes of The Flash are budget blockbusters. The show delivers Hollywood thrills on a tiny TV budget and is confident to create things beyond its ability. Whilst this “swing for the fences” attitude is refreshing, and something the writers should continue doing, ‘Attack on Gorilla City’ is an example of how disappointing The Flash is when its budget gets in the way.

Grodd’s return features in most nerdy dreams, and he didn’t disappoint. He schemed, bullied and controlled minds. His motivation was clear, sympathetic and understandable. He was once again a great villain. Physically, he was at his prime, and the animation never dragged you out of the experience. Director Dermott Downs deserves praise for his clever framing that disguises the lack of budget.

The writers also know how to disguise the small amount of money they’re playing with. Grodd speaks through other people, and the writers often resort to this power as a way to make the villain menacing and dangerous, whilst saving money. The actors have fun being possessed, with Tom Cavanagh nailing his impression of Grodd voice actor David Sobolov. 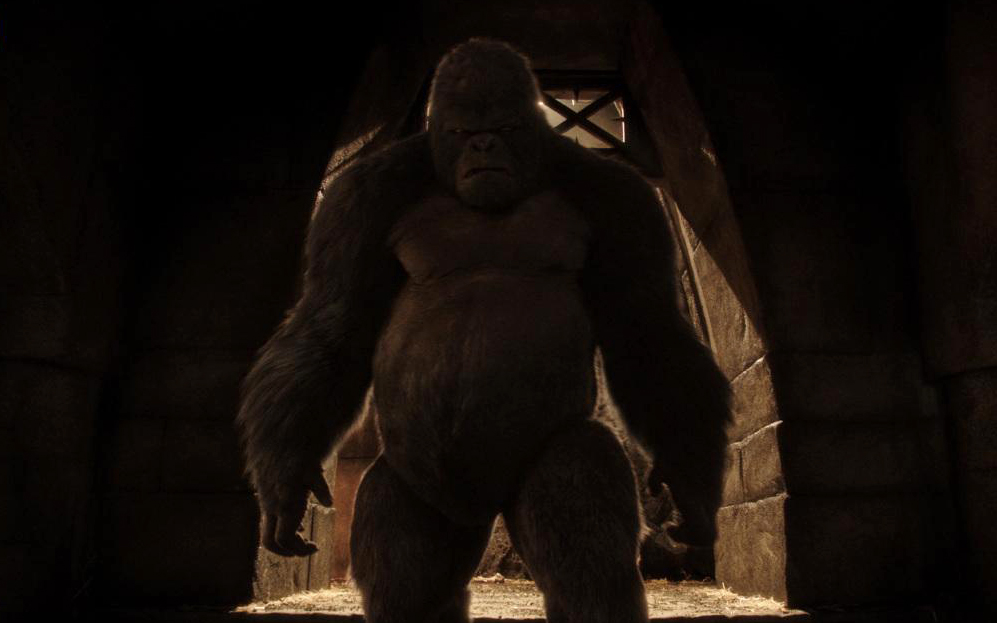 The show often uses intelligent storytelling when jumping some budget hurdles, but the premise of this episode can only highlight the show’s small pockets. There isn’t enough money to make Gorilla City a fully realised place. The action never leaves a set that looks like a barn and Gorilla City doesn’t fulfil its potential.

The small glimpses of the city are interesting. The architecture’s lost civilisation aspects are fascinating, feeding into the story’s adventure narrative. However, the episode only borrows the aesthetic elements of the adventure narrative. All social commentary is lost in favour of a poorly animated gladiator death match.

When Barry faces Gorilla King Solovar (voiced by Keith David) it is distracting instead of enthralling. It is clear Gustin was on a soundstage surrounded by green screen. Solovar’s detailing was nice, and anything that gets Keith David should be cherished, but the fight was an example of the show’s ambition moving just beyond its arms reach.

However, the character dynamics saved the gladiator match. As Barry fought, Cisco, Caitlyn, and Julian commented from the side, offering help and panicked reactions. The Flash understands character lasts longer than spectacle. The actors know each other’s rhythms, as Felton’s outsider status (as the latest recruit) reflects Julian’s place in the team.

As the Earth-2 expedition party fought gorillas, Earth-1 is protected by Wally (Keiynan Lonsdale) and Jesse (Violett Beane). Their story is short of action scenes and full of melodrama. Whilst there is a flirtatious spark between the characters, their relationship has made some off-screen leaps. Lonsdale and Beane deliver some corny lines, but they get the thrust of Jesse’s dilemma across.