‘Borrowing Problems from the Future’

Time and death are the two things we cannot out run. It is inevitable that we will die and it is inevitable that time will pass. After travelling to the future in the mid-season finale, ‘Borrowing Problems from the Future’ sees the Flash/Barry Allen (Grant Gustin) try to save Iris (Candice Patton) from her foreseen death. However, as he soon learns, changing the future isn’t easy.

The episode starts with the show playing catch up. Not only do Barry’s nightmares remind us Iris faces death, they allow the writers a chance to show us how much these two care about one another. Barry’s insomnia concerns Iris and she knows he isn’t sleeping because she spends her nights next to him. The show pains itself to show Barry and Iris are sexually active. These hints are knowing innuendo. As a family show, it can’t go all Game of Thrones on us, but the sex references are obvious efforts by the writers to develop the relationship. Now we know Iris has limited time left, we have to know Barry cares for her more than anyone else. The previous two and a half seasons make this clear but The Flash has never been one for subtlety. With every character saying they’re the best couple ever, it wants us to believe it.

However, just because you say it doesn’t make it true. Gustin and Patton have always had more of a chummy chemistry than a sexy one. It has often made the characters moving from friends to lovers seem awkward. Here is a different story. For the first time, it feels like they do love each other, the actors’ chemistry growing with the characters. Like any couple transferring from friends to lovers, there is awkwardness, and Gustin and Patton have attuned their chemistry to the story.

They shine in one pivotal scene. A criticism of The Flash is how Barry keeps secrets he shouldn’t be keeping. Fortunately, he is open this time. Patton is the right side of melodramatic and Gustin shows why Barry is a hero — it’s not because he is fast, it’s because he will sacrifice anything for the people he loves, even if it means failing as the Flash. 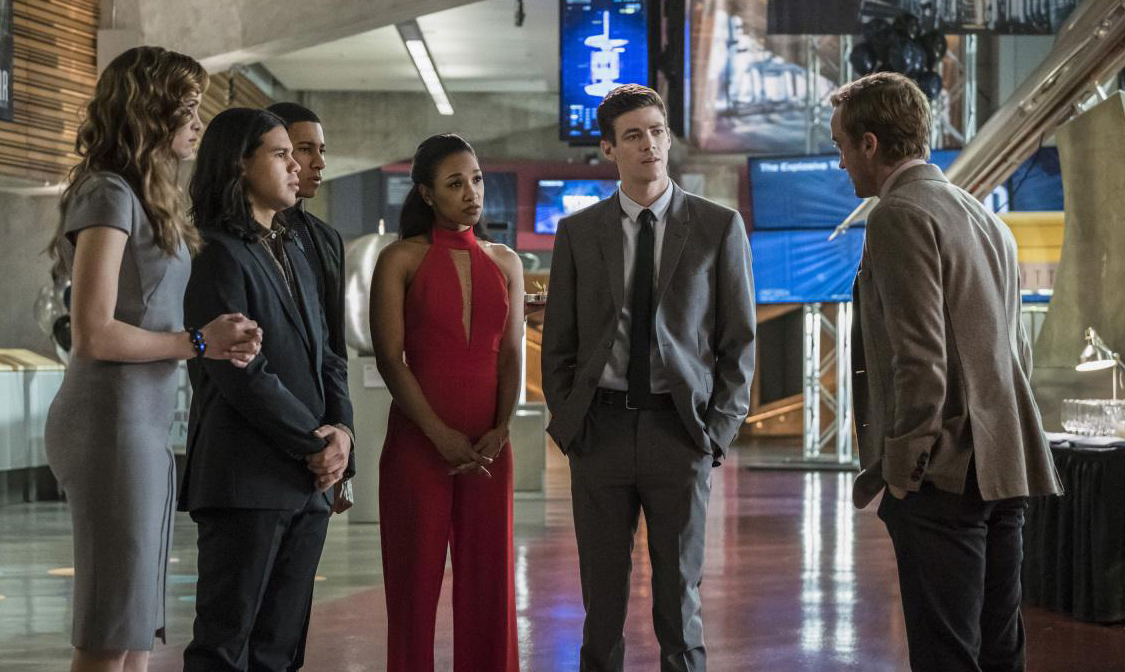 Barry’s attempts at changing the future include letting some bad guys go. Plunder (Stephen Huszar) is a pathetic villain — his defining characteristic is that he has a big gun. He exists to serve the plot and give us contrived drama. Wally (Keiynan Lonsdale) is now Kid Flash, and his story involves wanting praise. As an individual storyline, it’s weak but the way the writers stitch all their plots together disguises its flaws. Each plot feeds into Barry’s attempts at stopping Iris’s death.

Even HR’s (Tom Cavanagh) tangential attempts at creating the S.T.A.R Labs museum serve the greater storyline. HR’s creative ability allows him, and the writers, to distill complex science fiction plot points. Using some dominoes he shows Barry’s attempts at influencing the present to change the future could fail. It’s possible Iris has to die.

As The Flash furthers its A-plot, it tweaks the formula. No longer is it just about stopping meta-humans, it’s about changing the future. This new dramatic device opens the show up to new possibilities. It is unknown if the future can change, but the evidence presented in ‘Borrowing Problems from the Future’ suggests The Flash will be a ride finding out.