This week’s episode of The 100 did the unthinkable and actually managed to include a few brief moments of hope, before delving right back into the hopelessness and the hard choices once more. ‘How We Get To Peace’, despite the title, does not bode well for any viewers who may still be believing in the potential for the show to give us a peaceful future at some point. Instead, we’re going down a road that The 100 has explored several times before. Once again here we see our leads weigh up their same impossible choices – can they kill one person to save hundreds? – but once again it’s the strength of the characters, their history and their relationships that turns this episode from something that could have become repetitive and depressing into an unflinching examination of the choices these characters are prepared to make in the name of protecting their people.

And of course, at the heart of everything, was the power struggle between Clarke, Octavia and Bellamy. Picking up almost exactly where last week’s episode left off, it should come as no surprise that it’s not long before Bellamy refuses to be involved in a plot to kill his sister. Instead, they hatch a plan to try and even the odds and force a surrender, take the worms they were planning on using to soften the battlefield out of the equation and kill Cooper in the process, making it look like an accident. The aim is to bring an end to the conflict without needing to go to war; the reality is Octavia instantly realises this was murder, and arrests Clarke, threatening Bellamy into staying silent so he doesn’t end up in the arena too.

The tension between Bellamy and Clarke was wonderfully done here. They’re working towards the same goal – Wonkru surrender – but coming at it from very different angles. Clarke is desperate in wanting to protect Madi, willing to kill and believing that she’s doing the right thing all the while. Bellamy, meanwhile, wants to save Echo and his friends from being decimated by his little sister’s bloodthirsty tactics and is a little more hesitant when the plan calls on them to kill people. But still, they work together, fighting for their shared goal and falling back into their old habits of killing the few to save the many. Just like in Mount Weather, both Bellamy and Clarke share the responsibility for this kill, each taking the moment to witness it, and try to tell themselves they’re doing the right thing. But unlike in past seasons, there is a shift here, and it’s one that Clarke acknowledges when she admits that she’s started thinking with her heart and not her head, and then points out the differences between them in the six years they’ve been apart.

But then Clarke gets arrested, and Bellamy Blake puts his heart and head together for his boldest move yet. For all the time – in this episode, this season, the entire series – that Bellamy has spent protecting Octavia, even through her worst moments, it seems Blodreina’s ordering of Clarke’s execution is one step too far, serving as the moment that breaks the bond between the Blakes for good. Losing Clarke is not an acceptable loss for Bellamy. Call it survivor’s guilt or gratitude for Clarke’s role in saving his life if you want, but you could also follow Octavia and call it what it is: love. Bellamy and Clarke have proven their love for each other time and time again in this show through their support of each other, the promises they make and, here, crucially, in Bellamy’s actions as he poisons his sister and stops her tyrannical rule, at least temporarily. It was a devastating scene for the Blake siblings, but a brilliant one for Bob Morley, who managed to put every flicker of heartbreak, regret and sadness into his face as Bellamy does the unthinkable and puts someone else over his sister for once – and, really, what other way could it go, when the answer has been one of the core building blocks of Bellamy’s character since season one: she’s his sister, so she’s his responsibility. 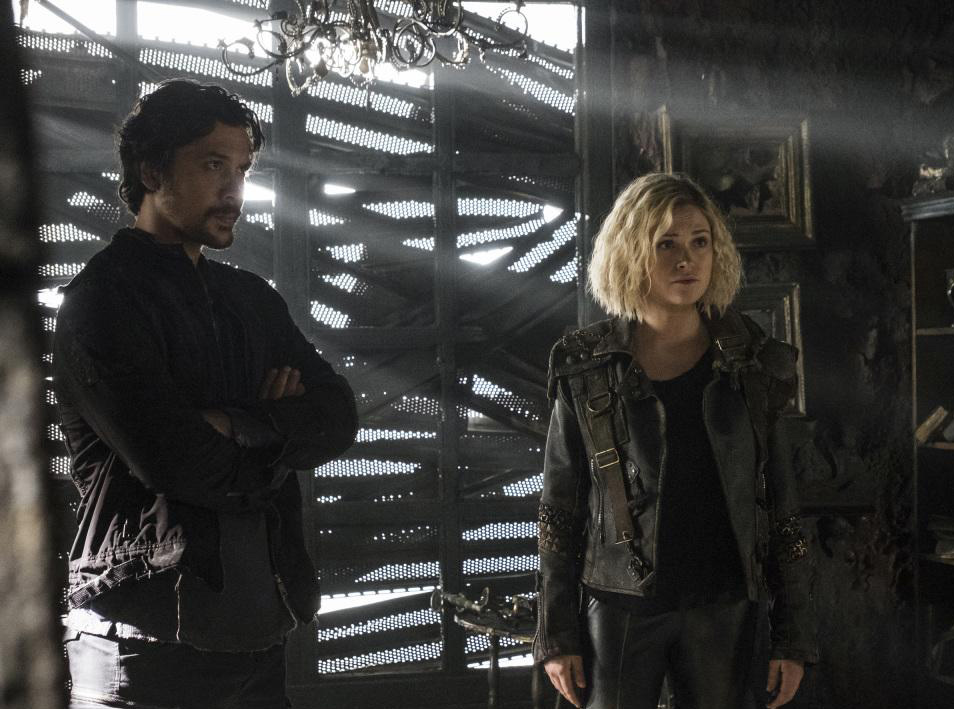 They’re not the only characters making heart-wrenching choices in the pursuit of peace, either. This week’s episode delivered a long-awaited reunion between Abby and Raven as Raven is called into Abby’s make-shift medical centre to engineer a device that could save the prisoners from their chronic lung disease, only to be faced with Abby in the throes of her addiction. It’s a situation Raven has been in before, having watched her mother drink herself to death, and seeing it happen again with Abby brings with it a world of pain – both mental and physical. It also marks a turning point for Raven, cementing Diyoza as a villain in her eyes, and one they can’t let win – so much so that she’s now willing to let Echo kill Shaw and take away Diyoza’s only pilot. It’s a difficult decision to see Raven come to, especially when you consider the burgeoning relationship between the pair.

Murphy, too, has entered into the world of hostage negotiation in a bid to try and protect his friend Raven, while Monty is left disillusioned with the violent life they’re forced to live on the ground, no longer wanting to have any part in killing in order to save a few more. Ultimately, Monty and (the vastly underused) Harper decide to build a life for themselves away from a life of war, or violence, but the most surprising shift is in Diyoza, who takes offence at being called a dictator who does horrible things in the name of survival by Kane and reveals that she’s only preparing to defend, not to fight, and that she doesn’t want a war either. Instead, she wants to raise her child in peace, and Kane has given her hope that she’ll one day be able to do so.

But, for a season that’s spent eight episodes building up to a war that still hasn’t happened, the idea of peace, to quote Bellamy in the season three episode catch-ups, is a foreign concept. The phrase “this is how we get to peace” is said twice in this episode; the first time by Diyoza, who sees her problems being solved by everyone else as Clarke agrees to take out Octavia and Murphy threatens to kill McCreary, and the second by Clarke, who’s watching Cooper beg her and Bellamy to make the pain stop as they put their plan to weaken Wonkru in battle into action. Needless to say, neither of their plans for peace go well, and we’re left heading into the final five episodes with more conflict, uncertainty and tension than ever.