Everyone’s got an angle to play in this post-praimfaya world that The 100 is teasing out for us, and in ‘Exit Wounds’ it’s clear that not everyone’s interests are aligning quite as closely as they probably would have done before the end of the world hit at the end of season four. Most of this week’s episode was spent carefully exploring the simmering tensions growing between characters, providing a brief breather from the looming threat of war between Wonkru and Eligius, and once again it was those brilliant Blakes at the heart of it all. Between Bellamy and Octavia’s struggle to understand how the other person has changed so much in six years and Clarke and Bellamy’s conflicting priorities as Madi’s very presence draws out new conflicts and unexpected allies, ‘Exit Wounds’ soon proved itself a veritable feast for character dynamics, even if the actual action was a little less forthcoming.

Still, if we can rely on anyone for fireworks, it’s the Blake siblings, and Bellamy and Octavia more than delivered when it came to the Echo problem, with the question of whether or not the former Azgeda spy deserves forgiveness – or if anyone deserves forgiveness, really – neatly dividing their world views right down the middle. Despite Bellamy’s defence of Echo, Octavia makes her position known very early on – Echo was once banished from the bunker, and Octavia’s judgement still stands six years later. It proves an insurmountable challenge for the Blakes to overcome, mainly because both Bellamy and Octavia do have valid points.

Bellamy, having lived for six years with Echo on the ring, has seen Echo grow, change and mellow (probably), even coming to develop feelings for her, and she’s become one of his family, someone on the list of people he will always protect. Unlike Bellamy, however, Octavia hasn’t seen these changes happen, so while Bellamy is arguing for the person, Octavia is judging her based on her actions – including, but not limited to, killing Gina and 40 others in Mount Weather, killing Ilian in the Conclave and ‘killing’ Octavia herself in their fight on the clifftop. In Echo and the Blakes’ reaction to her, the audience is given The 100 in a nutshell – can we forgive terrible actions if they were done for the ‘right’ reasons, in each character’s own opinion? After all, everyone on this show can argue that their actions are committed in the best interests for their people, so do we understand and forgive, like Bellamy, or remember and use them to our advantage, as Octavia goes on to do. 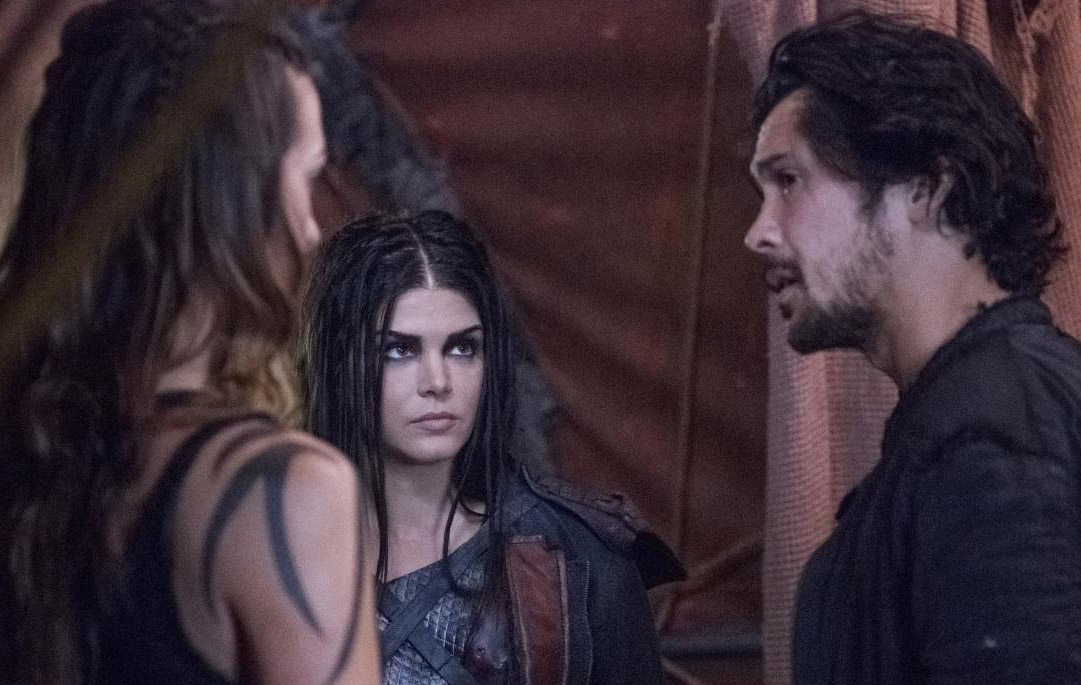 Whether or not you’re happy with Echo’s increased presence in this show is another debate entirely, but this week The 100 proved that it has grand plans for the character who, by the way, almost certainly has changed in her years in space. Enlisted to spy for Octavia in a bid to lift her banishment, Echo instead opts not to deliver Blodreina the names of those who are planning to defect to Diyoza and the promise of a better life in Shallow Valley, whereas before, Echo wouldn’t have hesitated in giving up the traitors. Instead, she and Bellamy come up with a new plan: they’ll pretend to defect to help Monty gain remote access to the ship’s systems, so he can shut down the Eligius’ ‘eye in the sky’ that’s watching their every move. It’s not a perfect plan, but it does feed perfectly into the game Octavia is playing here: it separates Bellamy and Echo, and she gets to kill some of her traitors in ordering Cooper to take them out while letting Echo go. Octavia gets her inside man, the consequences for Wonkru defectors are made deadly clear and it helps Diyoza believe that it’s a real defection, proving that while Blodreina may not be a born leader, she’s also not stupid, and she knows how to work the game in her own favour.

Which also means that Clarke and Madi may have to tread very carefully now that Octavia knows that Madi is a nightblood. For most of this week’s episode, Clarke was focused on keeping Madi’s nightblood a secret, lying that she was given synthetic nightblood in order to ensure her survival and protect her from the grounders who still believe in the flame and the commander, and who may try to use Madi to overthrow Octavia. It brings her into conflict with flamekeeper Gaia, who meets Madi and is left intrigued by her, and also her old friend Niylah, who soon proves that she’s devoted to the cult of Wonkru and is a threat to Clarke and Madi. The fact that Gaia is the one who wants to protect Madi is a pleasant surprise, and introduces a new relationship between Gaia and Clarke that promises to be a fun one to explore. As Gaia says, Octavia saved her life but she can’t forget her faith, and the myth that Madi presents is certainly a compelling one; a nightblood child who appeared two days after they rose from the ashes of the bunker is a legend of deliverance that the grounders will hold on to, and will put Madi in the centre of a power struggle. 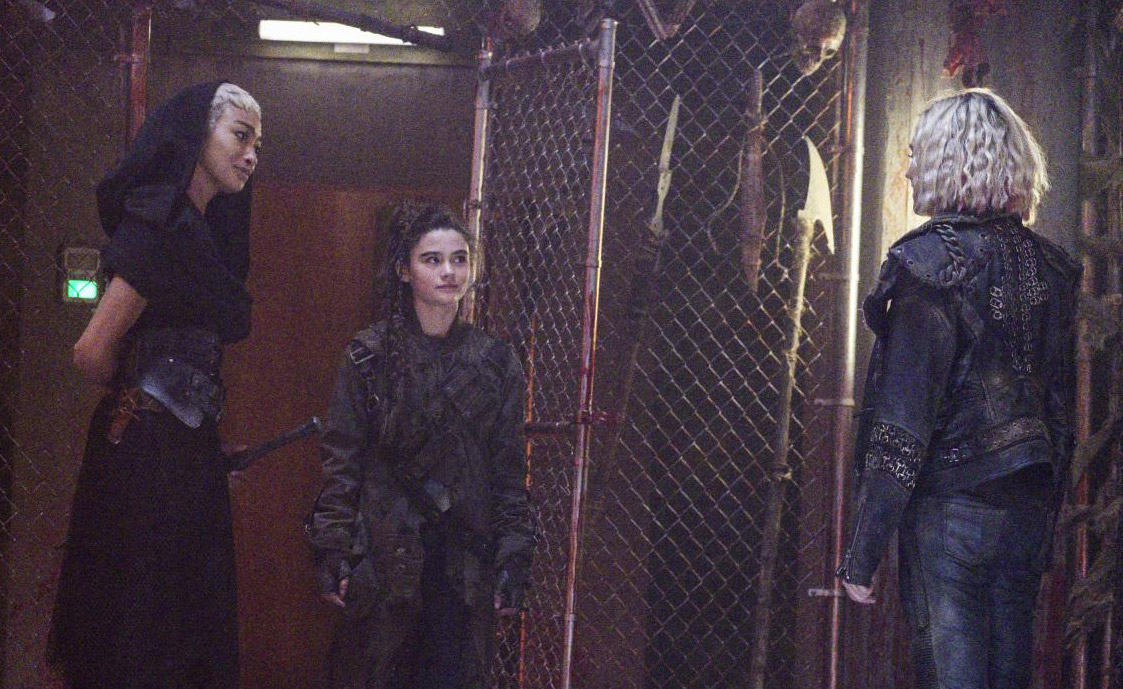 Of course, Clarke’s best laid plans soon go to pot when Madi takes it upon herself to reveal the truth to Octavia in a bid to protect Clarke from Diyoza, ending with her joining Wonkru and beginning training with them. It serves to stir up more tension between Octavia and Clarke, with Octavia taking responsibility for Madi now – “she no longer needs your protection. She has mine” – and establishing that she knows that Clarke has lied to her, meaning she’s not likely to be trusted any time soon. It also gave the audience a chance to see a version of Clarke and Bellamy who don’t immediately open up to the other. Twice in this episode, Clarke left Bellamy to focus on Madi’s protection from perceived threats and Clarke was prepared to leave Bellamy again to ensure Madi’s safety, primarily from his sister. For once, Clarke and Bellamy are fighting very different fights, and as a result both characters are just a little more closed off with each other here than they were in the episodes immediately after their reunions.

Through all of ‘Exit Wounds’, games are being played by several parties – from Kane ensuring his survival by sharing information with Diyoza, who in turn is protecting Kane from McCreary, to McCreary’s own literal cat-and-mouse hunt to track down Murphy by the signal being emitted from his shock collar – and of course, not everything goes to plan. By the end of the episode, Diyoza has shock collared the defectors to keep them under control, while Murphy and Emori have managed to turn the tables on McCreary and are preparing to take him hostage, and that’s before getting into the dangerous power plays that Clarke, Bellamy and Octavia have found themselves in the middle of.

Compared to the first run of episodes, ‘Exit Wounds’ did feel like it was missing a little something, be that explosions, Raven, or even a bit more from Diyoza and Eligius, who have already proven the best new threat this show has introduced for a while. But it was also another solid outing, putting focus on the characters in a way that The 100 excels at and making one thing very clear: there’s still plenty more conflict to come.