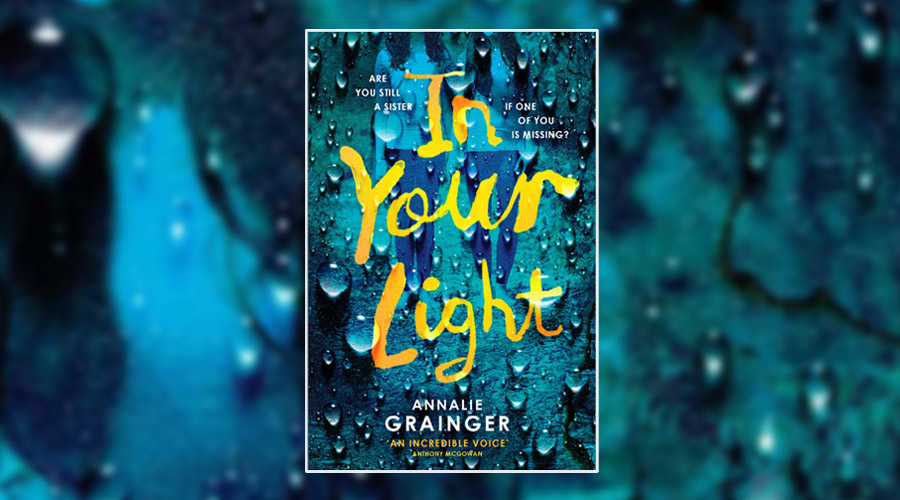 Inspired by her time as a volunteer at Missing People, an independent charity organisation that supports those who are missing and their families, Annalie Grainger’s In Your Light is an emotionally charged story of secrets, sisterhood and the search for redemption.

It follows sixteen-year-old Lil Laverty, whose world fell apart the moment her older sister Mella went missing. It’s been over four months and the police don’t have any fresh leads. It’s as if Mella simply vanished into thin air. Lil is haunted by the argument she had with her sister the night before she disappeared and, with her mum’s mental state increasingly fragile, she’s just trying to hold what’s left of her life together.

When she finds an injured young girl lying in the middle of the road, Lil’s first instinct is to help her. The girl is wary of strangers and even more terrified of the authorities, and with severe floods threatening the rural Welsh landscape, Lil has no option but to take the girl back to her house, where they soon become trapped by the hazardous, life-threatening weather.

As Lil gains the girl’s trust, she learns that her name is Seven and she comes from a so-called peaceful community called The Sisterhood of Light. Yet the more Seven reveals about the spiritual commune and why she fled it, the more it sounds like a dangerous cult. Then comes the startling revelation that Seven knew Mella and could be the only person with the key to finding her – if they can make it through the floodwaters that is.

From the moment In Your Light begins, there’s a sense of foreboding that carries through the entire novel – partly because of the impending storm, and partly because it feels like Lil would do anything, including put her own life in danger, to bring Mella back. Her despair has leached into every part of her life; whether it’s her almost too-careful relationship with her mum, her estrangement with old friends, or her inability to act on her feelings for Kiran, a boy she met at the kayaking club after Mella went missing. So when she gets this new lead in the tangible form of Seven, it’s like a lifeline she desperately clings too.

We learn about the mysterious Sisterhood of Light from Seven’s sheltered, naive perspective as she hesitantly confides in Lil. She doesn’t believe it’s evil but then she’s never known anything else. The more illuminating glimpses come from sporadic chapters told through the eyes of a cult-member called ‘Sister Brilliance’, as she begins to realise that the all-female commune isn’t the safe sanctuary she was seeking. It’s this frightening first-hand account of indoctrination that turns Lil’s search for her sister into a race-against-time hunt that could have devastating consequences.

In Your Light is a moving testament to the bonds between sisters, both those who are born into the same family and those who find one another along the way. It’s an inherently female book, populated by women and girls of all ages, backgrounds and beliefs. Grainger infuses the story with an informed intensity and tension that comes from her experience working with Missing People. When it comes to the explosive final few chapters, you’ll be willing Lil to find Mella before it’s too late.