“You believe that to defeat an enemy who will stop at nothing, you must stop at nothing,” Luna tells Clarke in ‘Red Sky at Morning’. “How is that different than blood must have blood?”

It’s a good point, and yet this is the choice the Sky Crew have been left with. We’re told they’re bringers of death, that they will do whatever they have to do to take down their enemy, and we believe it’s the way of the ground. But then in comes Luna, in a fantastic performance from The Divergent Series: Allegiant actress Nadia Hilker, who has a very different kind of leadership style and offers a way to live peacefully. Peace which, granted, doesn’t last for long with Bellamy, Clarke and co around – maybe they really are the bringers of death. 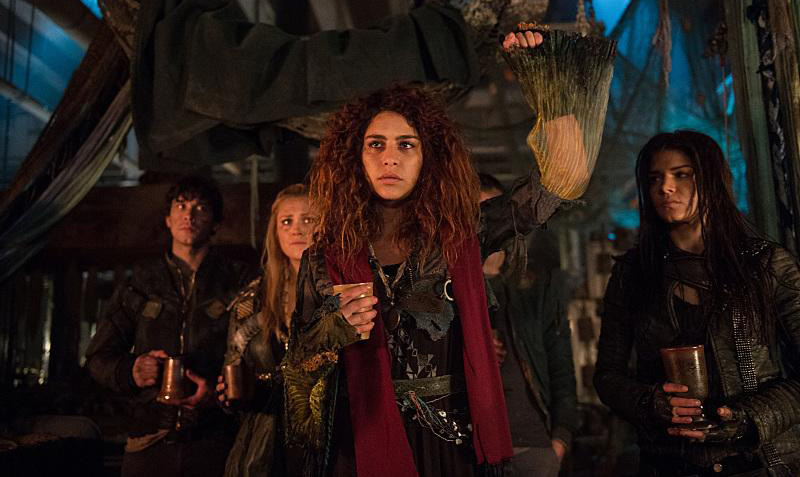 Spending time with a group of Grounder pacifists is a completely alien concept to us as an audience, let alone the characters of the show, and the very fact that their worlds are so different put Luna and Clarke into direct opposition in an episode that quickly became all about choices, and brought that morally grey area that so defines The 100 screaming into black and white.

Because for all her justifiable actions and determination to save her people at all costs, Clarke quickly becomes the villain in Luna’s story. She tries to force the Flame into Luna without first gaining her permission, she leads ALIE to the one peaceful place on the ground and she dismisses the deaths of Luna’s people as casualties in a larger war, none of which Luna is willing to just accept. But equally, to Clarke, Luna is the villain. She refuses to help them fight, she ran away from her birthright in the Conclave and she tricks, drugs and abandons them to the mercy of a now-common enemy. Which just goes to show that in this series, the characters’ choices do define them, in whatever way they’re interpreted. 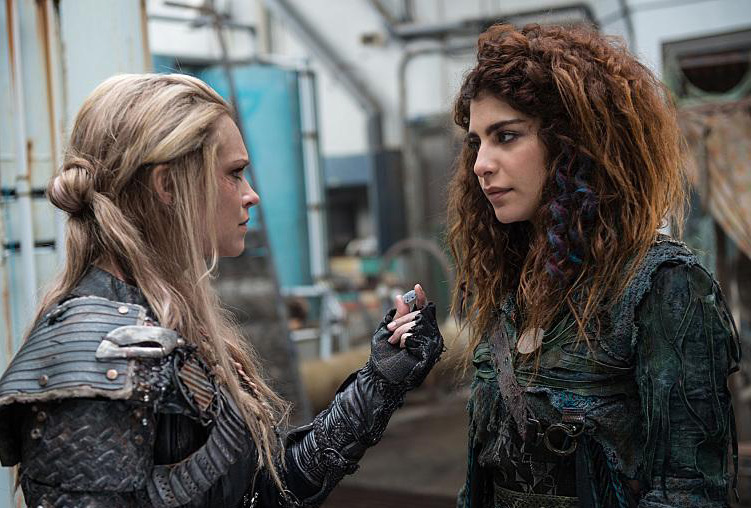 And then we have ALIE, who gives people choices, true, but they’re impossible ones and she only ever acts in her own interest. ‘Red Sky at Morning’ gives us an in-depth look at the City of Light and how it’s grown since we first saw it, both in size and population, and while super genius computer hacker Raven maps the City of Light from Arcadia and searches for a way to shut it down remotely, the unlikely team of Murphy, Indra and Pike seek to destroy the source of her power in Polis. To make matters worse, both sides are faced with the impossible: Monty and Raven by being blocked by the uploaded consciousness of Monty’s dead mother, and Murphy with the prospect of unleashing another dose of nuclear radiation into the world, not to mention the possibility of being responsible for Emori’s death.

The reappearance of Monty’s mum was significantly trippy, especially as it came so closely on the heels of him finally experiencing a modicum of happiness for the first time since he discovered cake in Mount Weather, if not since he landed. He’s been wrestling with the guilt of killing his mother since he pulled that trigger to save Octavia and here he has to kill her all over again, permanently, by deleting her from the City of Light to give Raven a chance at saving them all by shutting ALIE down. Murphy’s dilemma was somewhat less steeped in emotional guilt, but it was no less important and as Emori played such a good game, there was no way to tell if she was lying or not. But it did the job and both efforts failed, purely due to the humanity of those involved. And with that failure, both groups also lost their only shot at killing ALIE, who’s now migrated her power source to the remaining technology of the Ark in space, rendering her unreachable by those on the ground. 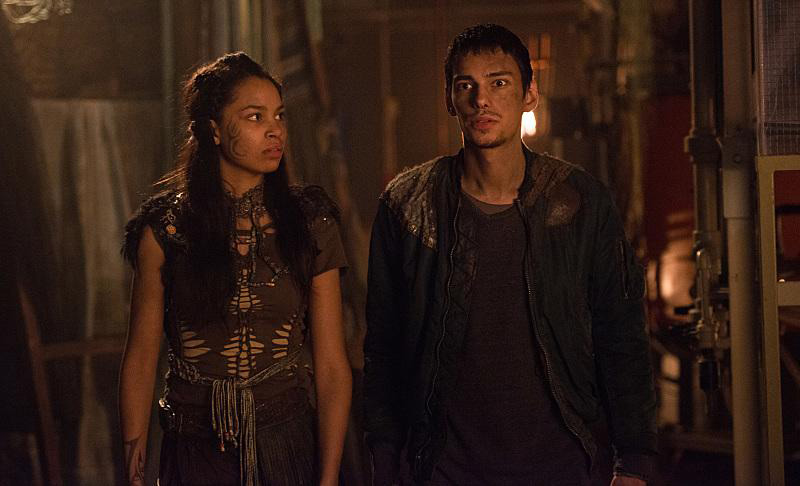 So we end the episode almost exactly where we started, with no Nightblood to take the Flame, no plan, no back-up plan and no clue how to go about saving their people, only now the characters have been considerably beaten down to boot, and Jasper may or may not have taken the chip – that was never made clear. But everything keeps coming back to the choices being made and, notably for a group of characters that are constantly bemoaning the fact that Clarke makes their decisions, Octavia, Bellamy and Jasper all look to Clarke to see what they should do next, to make that choice.

But, of course there isn’t one – because “when the choice is fight or die, there is no choice”. And if that isn’t an exciting enough set up for a two-part series finale I don’t know what is.