Steven Spielberg’s film rendition of Ernest Cline’s none-more-geeky Ready Player One is a loose adaptation, to put it mildly. Fans of the book shouldn’t come looking for a faithful recreation of its obsessive dedication to detail, its meticulous exploration of obscure video game culture or even very much of its story arc. Instead, what you get is a hyper-charged, blockbuster riff on the basic concept of the OASIS VR paradise.

The characters survive, but Wade Watts’ transformation from penniless schoolboy to international superstar is largely dropped, as are his infiltration of IOI (that honour goes to Art3mis), Aech’s chatroom, Wade’s hermitage in Columbus, Daito’s death and most of the original challenges leading to the keys and gates in Halliday’s quest. The number one rule of the OASIS – never share your real identity – is breached about an hour into the film, and Wade (Tye Sheridan) and Arty/Samantha (Olivia Cooke) meet in person shortly after IOI have blown up Wade’s trailer stack. So much for the grand reveal that ends the novel on an emotional high.

If you’ve not read the book, about now you’re probably thinking: ‘so what? Is the damn film any good?’ And the answer is yes: emphatically yes. It probably speaks volumes of Cline’s co-writing credit that despite its extreme slim-lining, Ready Player One still has a huge amount of heart, and a sufficiently oddball sense of humour to lift it a notch above the average action/adventure romp.

Spielberg’s eminent fingerprints are visible throughout the film, as he plays on pop tropes he helped to create. Some of the shots are so Spielberg that you could be watching ET. In the post-Stranger Things frenzy for 80s nostalgia, Ready Player One does a good job of balancing retro with futuristic, soundtracking epic CGI space battles with Twisted Sister and Van Halen. There are also some nice filmic touches, like the grainy screen quality during a sequence played out inside The Shining.

Indeed, the visuals are the film’s real selling point. Ready Player One is an extremely beautiful movie. The animated sequences inside the OASIS are stunning, full of over-saturated colours and fantastical effects. They do a brilliant job of bringing to life the utopia described in the book in all its wonder and variety. The opening scene depicts a death race through a disaster-movie New York, and there’s so much going on that it really does drench your brain like the OASIS is supposed to do. Like the VR it depicts, Ready Player One is technological escapism at its finest. 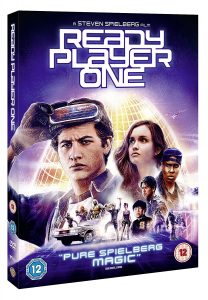 The geekiness is gone, however. The book was a hymn to anoraking – a paean to the universal teenage boy’s headlong descent into useless knowledge. The film has none of that attention to detail. It doesn’t have the time to enumerate the episodes of Japanese ninja TV that Wade watches, or explain why Dungeons & Dragons is relevant to Halliday’s quest. The book was the literary equivalent of a weekend in a Warhammer shop; the film is more like an all-night Call of Duty sesh. In the book, Wade wins because he has nerded over Halliday’s life for years. In the film, he wins through ultimate swashbuckle. There’s more of Han Solo than Sheldon Cooper about the film Wade.

But it could never have been otherwise in Hollywood. Luckily, the core concept of the OASIS is strong enough to sustain this high-adrenaline exploration, and in that context, the film serves as a fun companion piece to the book; another look at Cline’s world rather than a desecration of it. Well worth a watch – plug in and switch off.