Studio 54 was opened in 1977 by Steve Rubell and Ian Schrager, friends who had met in college and had gone on to co-found a raft of businesses. Rubell was the face of the club, revelling in the limelight and palling around with celebrities. Schrager preferred to stay behind the scenes; a couple of the interviewees here comment on how much harder it is to find a photograph of Schrager than it is of Rubell.

Rubell died from AIDS-related complications in 1989, but the film benefits immeasurably from having Schrager as a resource. Reminiscing about the Studio 54 years, he seems both amused and ashamed at some of the decisions he and his friend made. ‘When I look back at it now, it was so preposterous. What were we thinking?’

The documentary excels at portraying how exciting and influential Studio 54 was. More than the likelihood of sharing the dancefloor with celebrities, there was a real buzz around the place. The building used to be a CBS studio, and still maintained a showbiz air; it helped that the lighting designers all had theatrical backgrounds, and in some cases, Tonys. Everyone involved took great pride in making every night at Studio 54 the most extravagant show in town.

Studio 54 was an interesting mix of inclusive and exclusive. Thanks to some canny PR work, the club was wildly popular from night one, and that left hordes of disappointed, angry revellers waiting outside. One commentator described this crowd as ‘like the damned looking in to paradise’. The entry requirements seemed to many frustratingly mutable; you might be okay one night, but woe betide you the next if you weren’t clean shaven or were wearing a hat Rubell didn’t approve of.

Yet the place proved a haven for members of the LGBT community. In 1977, many were in danger just walking down the street. At Studio 54 they were always safe, and free to be authentic. A gay man himself, Rubell was proud to have created a space where those of all sexualities were welcome. 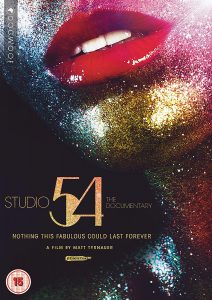 The more successful Studio 54 became, the more careless Schrager and Rubell grew. It wasn’t long before they drew the attention of both the IRS and the police. Between shady financial dealings and copious amounts of cocaine littering the premises, the business partners found themselves in plenty of trouble, both doing time in prison. Without the charismatic duo running things, Studio 54 floundered, and ultimately, failed.

Studio 54 is an even-handed exploration of all that occurred during the two years and nine months the club was open, acknowledging both the blessing it was to the gay community, and the mismanagement that was Studio 54’s undoing. It’s a fascinating look at a fascinating era.