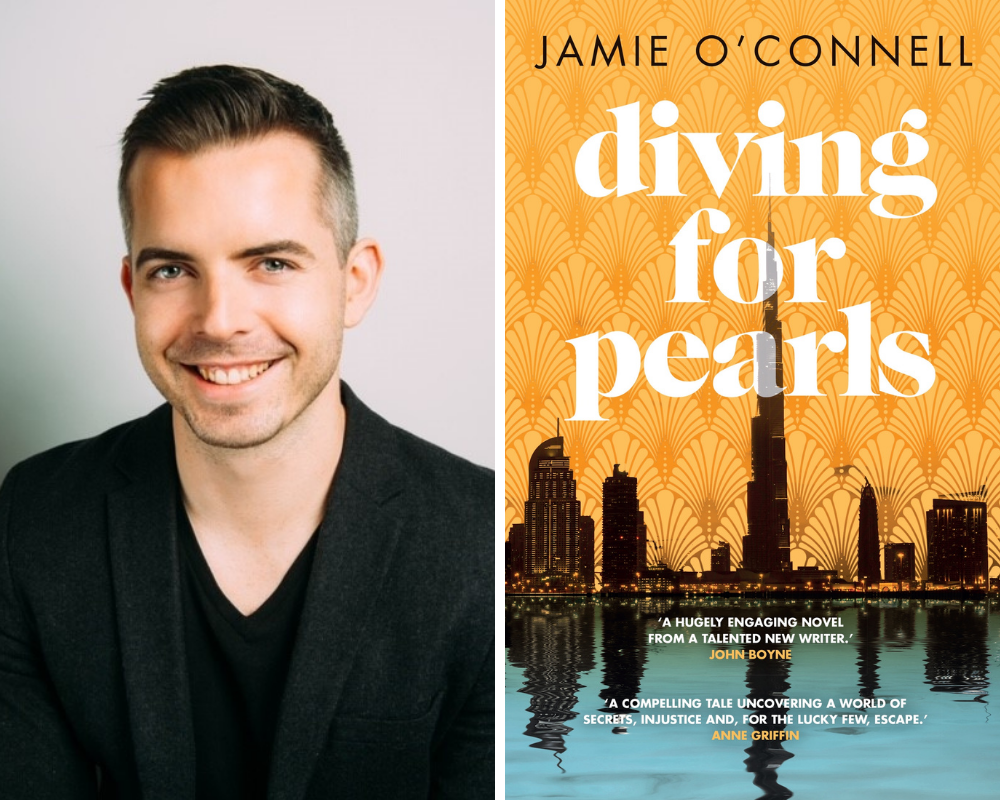 The extract is from the opening scene from the first chapter of Diving for Pearls. It follows Assim, a gay Emirati man studying medicine in Ireland. When I lived in Dublin, I had gay friends of Arabic descent and witnessed the two lives they lived. In Europe, they were ‘out’, but they were forced to remain closeted in their home countries. I could see the tremendous mental and emotional strain it caused. There seemed to be no real solution to it. – Jamie O’Connell

Aasim Husayin touches his wrist. TAG Heuer Monaco Calibre 12 Automatic Chronograph. Sounds like a gun. The balance of circles and squares. There is no doubting it. He owns the most beautiful watch in the world. He lifts it close to his face, examining the white lettering. Monaco. What a word. All it suggests.

The cream curtains glow in the autumn sunlight, reflecting off the watch’s steel finish. Aasim tucks his cool arm back under the blanket and gazes sideways. David is asleep on his stomach and strands of his blond hair are caught in his stubble. His clothes lie beside the bed; they have a worn, washed-in-saltwater quality Aasim finds curious.

The sounds from Pearse Street are muffled, though he makes out the occasional revving of a Dublin Bus. David’s eyebrows twitch. Sleeping is such a strange thing. All those hours that could be spent reading, shopping or meeting people; there has to be some drug or treatment that would solve the problem. He lifts the strands of hair off David’s face. David’s eyes open. He stretches and smiles.

‘Breakfast in a bit?’ David slips his arm under Aasim’s neck.

‘Yes, though I must go to the library.’

‘Me too. Godard awaits.’

Aasim rests his head on David’s chest, stroking the hairs, sensing the solid thuds of his heart, the flow of blood from the ventricles to the atria and out of the aorta. He thinks about the sinoatrial node pulsing. Is it normal, he wonders, that these things come into his head while he’s naked in bed? But maybe all RCSI students have these kinds of thoughts.

‘Your toes are freezing.’ David shivers as Aasim tucks his feet around his calves. Aasim strokes David’s boxers, tracing the line of flesh through the fabric, wondering if he’ll slip his hand inside. ‘I’m glad you’re back. It’s a pity about the new terminal being such a mess.’

‘There were people everywhere. I’m sorry about dinner.’ He’d spent their ‘date night’ stuck in Heathrow, his heart sinking as one by one all the flights into Dublin T2 got delayed, imagining David in the apartment, checking his phone, wondering if he should cancel L’Gueuleton.

‘How was your brother?’ David asks.

‘No different.’ Aasim gazes at the empty glass on the bedside table. His lunch with Mahmoud and Mama in the Kensington restaurant had been the same as all the others. All that talking without saying anything – it was hardly worth him flying over to London.

‘We don’t often hear from you,’ Mahmoud said. He looked like he was missing a night’s sleep.

‘My boys, don’t fight. Look. I bought you a present.’ Mama handed Aasim a TAG Heuer bag. ‘A little late for your birthday, but still.’ She kissed his cheek.

Mahmoud stood up. ‘I must get to my meeting.’ They watched him walk towards the exit.

‘Your father couldn’t do without him,’ she said. Aasim frowned at the mention of Baba.

‘Did you see the doctor?’

‘Earlier. It was only antibiotics.’

‘Did you confront Baba? How did he get it? Who was the girl?’

‘No. Alhamdulillah. The new projects mean he works night and day. We must make allowances.’ She adjusted her hijab and Aasim regretted asking so many questions. He didn’t want to add to her unhappiness. ‘So, Dublin is good?’

‘Hiyam showed me pictures of your friend David,’ Mama added. Aasim was silent, wondering what his sister might’ve said, but there was no escaping the heat rising in his cheeks. ‘Maybe I could visit next time. I would love to see where you live and meet your friends.’

‘It’s cold there,’ Aasim said, his tone sharper than expected. Then he smiled and added, as playfully as he could, ‘The shopping here is much better.’

Aasim gets ups and steps into the bathroom, picking up his toothbrush. Should he tell David about Baba cheating? Maybe in time. He doesn’t want others knowing and Mama humiliated. He would love to tell her to leave Baba. But if she did, where would she go? How would she live?

David appears behind; his lips press against Aasim’s hair. Aasim smiles. He has a boyfriend. The idea still catches him unawares.

‘Is that what I think it is?’ David touches the outline in his boxers. Aasim spits out his toothpaste. David’s arms tighten around his waist, leading him back to the bedroom.

Afterwards, Aasim listens to the cars outside on the street. He glances sideways and listens to David’s soft snores. He lifts his phone, looks at David again, before opening an app and scrolling through the male profiles, glancing at the messages he’s received, blocking most of the guys. He thinks about Mama and Mahmoud returning to Dubai. Though it’s less than two years ago, his old life there feels faint, like someone else’s. He doesn’t recognize that version of himself, how naive he was or how exposed he felt back home when there were conversations about raids of clubs and arrests of gay men. Of course, he’s never heard of any men actually getting flogged or worse, but they might as well be dead. There was no returning to normal life afterwards.

Hiyam hadn’t seemed to care when he’d got the offer from RCSI; she pretended she was listening but her fingers moved across her phone. Zulfa was cleaning the windows . . . was it Zulfa? He could never remember the maids after they got uniforms.

‘But Ireland?’ Hiyam had asked.

‘It’s not here.’ he said. Sitting beside her, he opened his laptop and searched for Dublin. He looked for malls; St Stephen’s Green was close to the college.

‘Think of the parties you could have,’ Hiyam sighed. ‘Get somewhere big and I’ll come visit.’

‘Baba will never let you.’

‘He won’t mind. It doesn’t matter how I behave, as long as I don’t get caught.’ She pulled her phone close. She had a sly look. Baba called her Cleopatra from that old film and joked she was ‘too pretty to avoid trouble’. Mama said she would one day be the most beautiful woman in the Middle East.

‘Doing nothing as usual?’ Mahmoud appeared.

‘Aasim got university in Ireland,’ Hiyam said. Her phone vibrated.

Zulfa scurried away. All the maids were like frightened mice when Mahmoud was around. The sound of cutlery falling echoed in from the kitchen. Mahmoud rolled his eyes. He looked back at Aasim.

‘At least now you’ll be doing something useful and not just spending money.’

Diving For Pearls is published by Doubleday on 3 June 2021