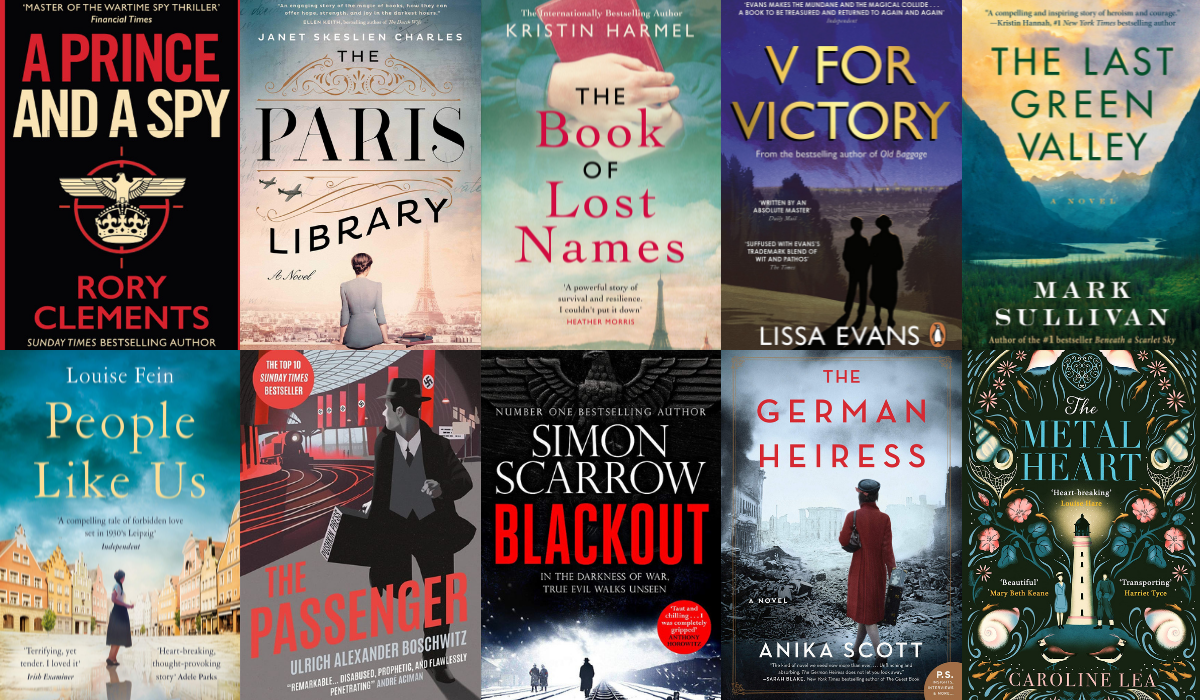 Read an extract from Diving For Pearls by Jamie O’Connell

Reading wartime stories not only offers a glimpse into bygone eras but it’s also an evocative way of learning about our history and the heroic people who lived through such adversity. Whether you enjoy delving into fiction inspired by extraordinary real-life tales or losing yourself in a twisty spy thriller, here are 10 historical wartime books that will keep you gripped from start to end.

The Passenger by Ulrich Alexander Boschwitz 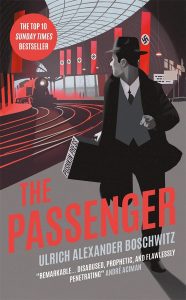 Written after the author fled his home following the rise of the Nazi regime, The Passenger follows a respected German-Jewish businessman as he travels across Germany by rail, seeking safety across the border. With all the money he can gather stuffed into a suitcase, Otto Silbermann boards train after train, all the while terrified that a fellow passenger will discover his Jewish identity. Written by a young author – Boschwitz was only twenty-three when he penned his novel – who experienced the persecution first hand, this rediscovered literary classic captures the horror and fear of life in Germany during the late 1930’s. It’s a taut and chilling story – made all the more pertinent by the knowledge that Boschwitz died at just 27-years-old when the ship he was a passenger on was torpedoed by a German submarine in 1942. (Pushkin Press) 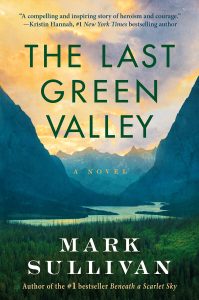 Emil and Adeline Martel are a family of German heritage whose ancestors have farmed Ukraine for more than a century. As Stalin’s forces descend on their homeland, the Martels must make a terrible decision: wait out the Soviet invasion and risk being sent to Siberia, or follow the wolves – murderous Nazi officers who’ve pledged to protect ‘pure-blood’ Germans. Choosing the latter, Emil and Adeline retreat with the other refugees, embarking on a journey of nightmarish trials and hardships as they seek to escape to the West. Following on from Sullivan’s previous historical bestseller, Beneath a Scarlet Sky, this is another emotional WWII story of survival that highlights the power of love, fortitude and keeping faith, even when it feels as if all hope is lost. (Lake Union Publishing)

The Metal Heart by Caroline Lea 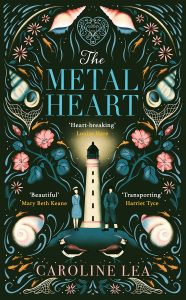 Set on a fictional remote island in the early 1940’s, The Metal Heart centres on a prisoner-of-war camp that’s constructed to house Italian soldiers. Greeted by a cold, windswept landscape and an even more hostile community, it isn’t long before tensions grow between the islanders and the outsiders. Amidst the secrets, superstitions and divisions, two orphaned twin sisters volunteer to nurse the injured men, setting them on a collision course that will test their sibling bond and sense of duty. Inspired by the true story of the building of the Orkney Wedding Chapel during the Second World War, Caroline Lea has penned a haunting historical tale that explores love and war – and the consequences of both on the central characters. The mix of factual inspiration and fiction makes this a mesmerising and atmospheric read. (Michael Joseph)

The Book of Lost Names by Kristin Harmel 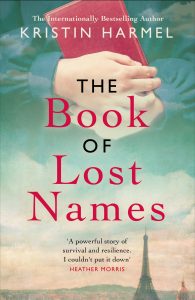 The Book of Lost Names is inspired by the real life amateur forgers who assisted thousands of people in escaping Nazi France during WWII. The heroine of Harmel’s book is Eva Traube, who – along with a mysterious forger named Remy – falsifies documents to help Jewish children and French resistance fighters escape into neutral Switzerland. Knowing the importance of preserving the identities of the people they’re helping, Eva and Remy begin to encode the real names into a book. Switching between 1942 and 2005, where an elderly Eva must revisit her memories and mission, this is an empowering and heart-wrenching story about love, loss, courage and humanity. Harmel fills her reimagined story with evocative historical detail and a relatable central character with genuine heart and empathy. A must-read for fans of The Tattooist of Auschwitz. (Welbeck Publishing) 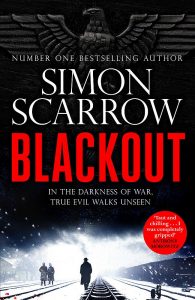 The first book in Simon Scarrow’s new crime series follows former-racing driver turned criminal inspector Horst Schenke as he investigates a spate of murders in wartime Berlin. With the city plunged into a rigidly enforced and oppressive blackout, Schenke’s search for the killer takes him closer to the sinister heart of the Nazi regime, where warring factions of the Reich can be as deadly as a killer stalking the streets. Already treated with suspicion by his superiors for not joining the Nazi Party, Schenke must walk a perilous line or face the death sentence delivered to so many already. The snowy landscape of Berlin during the Second World War provides a bleak backdrop for the story, which marks a shift in Scarrow’s historical focus (his Eagles of the Empire series takes place in Roman times). Fast paced, with a likeable protagonist at its core, Blackout is a promising start to this new series. (Headline)

V For Victory by Lissa Evans 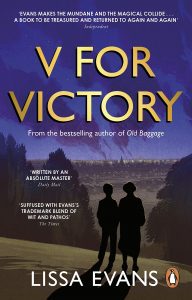 Lissa Evans’ Old Baggage was one of 2018’s standout novels, deservedly gaining Waterstone’s title as Book of the Month. Now Evans is back with another inspiring tale that explores life at the end of the war and what happens when the conflict comes to a close. It’s late 1944 and Allied victory is on its way but Hitler’s rockets are still raining down on London. In a large house next to Hampstead Heath, Vera ‘Vee’ Sedge has a household of lodgers – including her teenage ward Noel – and is just about scraping by. When she witnesses a road accident, she finds herself in court – a dangerous place to be when you’re not the person you’re pretending to be. But Vee isn’t the only person with secrets to hide. Published in hardback last year and paperback this month, V for Victory is a lively and intelligent tale that will both move you and make you smile in equal measure. (Black Swan)

A Prince and a Spy by Rory Clements 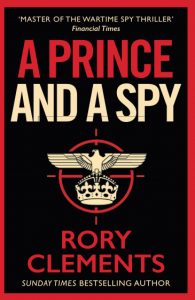 If clever and dramatic spy thrillers are your genre, then you’ll want to pick up a copy of Rory Clements’ A Prince and a Spy, which is out now in paperback. The fifth book in the Tom Wilde series is based on the mysterious real life death of the King of England’s brother, Prince George, Duke of Kent, in a plane crash at the height of World War II. In this tale, the Duke’s death is ruled an accident but not everyone is convinced. With no evidence to support the suggestion of sabotage and conspiracy, Cambridge spy Tom Wilde is sent north to find out the truth. Taking readers right into the heart of the Third Reich, as well as the intricate workings of the British Monarchy, Clements has crafted an absorbing and intriguing spy story that imagines what could have happened to the King’s brother. (Zaffre) 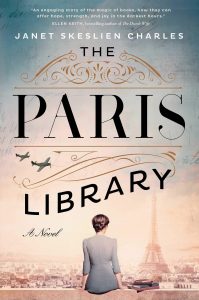 The Paris Library is a dual narrative book that’s split between two young characters and two very different timelines. In Paris, 1939, Odile Souchet has just started her dream job at the American Library. So when the Nazis march into Paris, Odile and her fellow librarians join the Resistance armed with the best weapons they have: books. In Montana, 1983, lonely teenager Lily finds a kindred bookish spirit in her elderly neighbour, Odile. As she learns more about her neighbour’s past, she starts to unravel a long-hidden and closely guarded secret. Exploring the true story of the librarians who risked their lives during the Nazi occupation, Janet Skeslien Charles’ novel is a celebration of books and language, paying tribute to the libraries and everyday heroes who refused to accept the war on words. A wonderful story that champions the transformative power of books. (Two Roads)

The German Heiress by Anika Scott 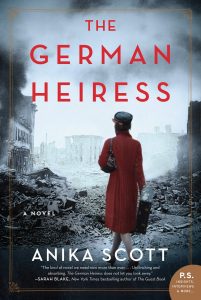 With so many wartime novels, it can be difficult to find a story that feels new and unexplored. Enter The German Heiress, a thought-provoking and meticulously researched tale of redemption that transports readers to post-war Germany. Clara Falkenberg was once an iconic and lauded heiress but now she’s on the run after escaping arrest for war crimes. Hunted by a British officer who’s hell-bent on making her pay for her actions, Clara returns to her home of Essen to find a ruined city. Worse still, her dear friend Elisa is missing. Desperate to find her friend, Clara enlists the help of a young racketeer called Jakob, who has his own reasons for wanting to find Elisa. Anika Scott’s debut offers a unique take on the war from the often-disregarded perspective of the other side – those who were caught in the crossfire of the Nazi regime and became complicit as a result. (Windmill Books) 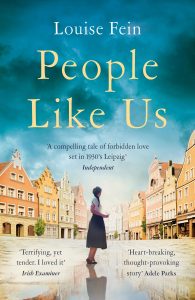 Shortlisted for the RNA’s Historical Romantic Novel Award 2021, Louise Fein’s People Like Us is a tender forbidden love story set in 1930’s Leipzig. It’s inspired by the author’s own family history and follows Hetty Heinrich – a member of the Nazi Party youth movement and the perfect German child – who falls in love with Walter – a boy with blond hair and blue eyes who saves her life. He also happens to be a Jew. With anti-Semitism growing by the day, Hetty begins to question everything she’s been taught, fighting against her family, the regime and her loyalty to it. She’s willing to risk everything to keep Walter safe, even if it means sacrificing herself in the process. Drawing parallels between the past and our present, Fein captures the power, poignancy and urgency of young love between two people living through dark and terrifying times. (Head of Zeus)

Read an extract from Diving For Pearls by Jamie O’Connell