Carmen (Rosy Rodríguez) is about to get engaged to her boyfriend Rafa (Juan José Jiménez). She meets Rafa’s cousin Lola (Zaira Romero), a closeted lesbian and budding ornithologist, at the market where they both work with their families, and Lola feels an instant spark. Although at first she’s repelled by her new friend’s romantic interest, over time, Carmen begins to feel it too. In the Roma community where they both live, however, acting on their desires carries a whole host of dangers…

The thing about Carmen and Lola is, you can see all the cogs whirring. From the moment we first arrive in this simultaneously vibrant and repressive world, it’s clear where the story is heading. We’re introduced to this community as an unwelcoming place to any woman not willing to be shoehorned into the stifling patriarchal structure – Lola’s father is more than happy for her to forgo her studies so she can focus on the important business of finding a man, Carmen’s dad boasts to her prospective in-laws, “My daughter has never been outside without being accompanied.” The blaring subtext, as Lola hides herself in a booth at the internet café to secretly watch lesbian porn, is that any relationship that doesn’t conform to traditional gender roles is not going to be accepted here.

So Carmen’s initial revulsion at the prospect of a romance with a woman is par for the course, as is her slow warming up to the idea. And the courtship scenes in Carmen and Lola are lovely; warm and sensual, lots of close-up shots of hands tentatively caressing skin, illicit touches under tables and entwining of fingers. Rosy Rodríguez and Zaira Romero, both making their debut movie appearances, have an endearing chemistry, and if the whole story wasn’t so rote, it wouldn’t be hard to become engaged in their love story. 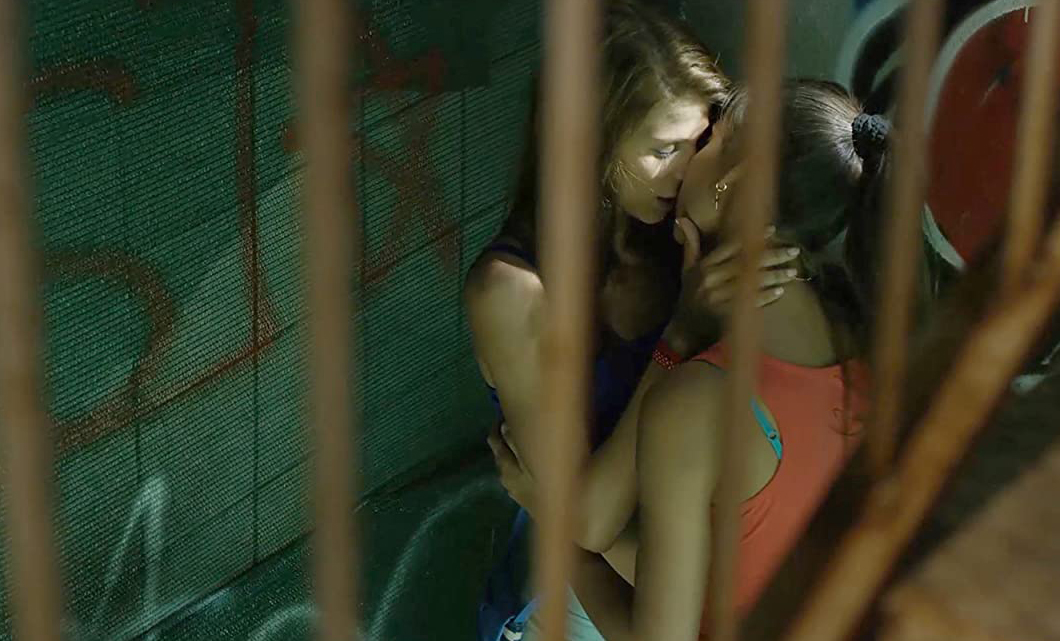 Alas, Carmen decides to write Lola a love letter, for no apparent reason other than it being the quickest available plot mechanism to lead to the discovery of their relationship (there are those cogs whirring). The inevitable happens, and then we’re off to the predestined finale. It’s intense, often viscerally so, but that fact that it was so easy to see coming – the last stop on the track the film has been rigidly affixed to – makes it hard to feel much of anything, one way or another. Even the frequent bird symbolism is on the nose; of course Lola, weighted to the earth of her oppressive community, would be enchanted by creatures with the ability to fly. It’s all too obvious.

Carmen and Lola is not a bad movie. The predominantly non-professional cast bring a palpable authenticity to proceedings, and writer-director Arantxa Echevarría ably choreographs the many crowd scenes to create an atmospheric sense of controlled chaos.  It’s just a real shame that her film never tries hard enough to distract from the gnawing feeling that we’ve been here too many times before, and we know exactly where it’s all going to go.