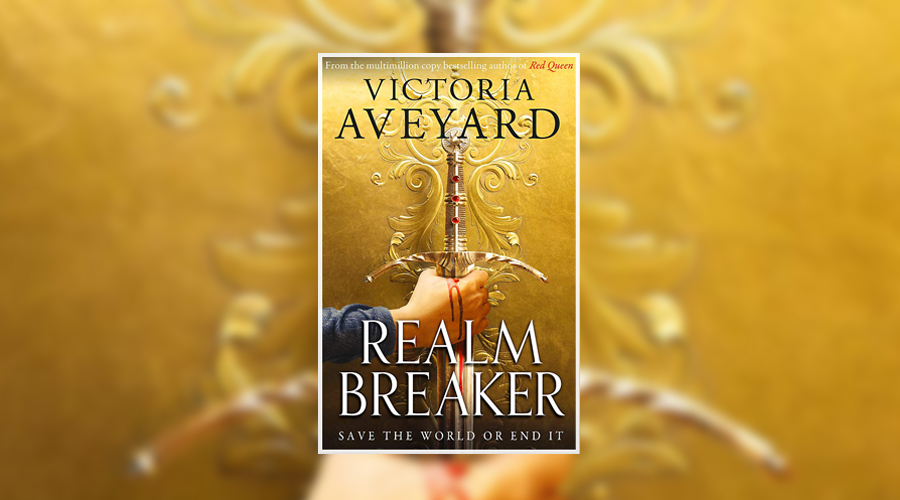 By self-admission, Victoria Aveyard was extremely intimidated by the prospect of writing her latest book, Realm Breaker. Her debut YA fantasy novel, Red Queen, and its subsequent three sequels were hugely popular – putting the American author on the fantasy map in her early twenties, just after she’d graduated from university. With this new novel, an epic Tolkien-esque fantasy just over 550 pages long, not only did she have to live up to the expectations of readers, but she also had to prove to herself that she could actually write another book – let alone another bestseller. Well, prove she could, she did – and whilst it’s too soon to say whether this new series will be as popular as Red Queen, it’s certainly an encouraging start.

Realm Breaker is a classic ‘save the world or watch it burn’ premise that unites a disparate group of characters in a fight against a common enemy. The prologue shows us that enemy – Taristan – in all his brutal, inhumane glory as he unleashes an undead army on the realm’s courageous saviours, massacring all but two: Andry, a noble squire with dreams of being a knight, and Dom, an immortal who’s lost faith in his own people. As they begin their quest, Andry and Dom are joined by Sorasa, a skilled assassin who might not be quite as heartless as everyone thinks, and Corayne, a pirate’s daughter and the last of an ancient lineage with the power to stop Taristan from breaking the realm.

Throw in a forger, a bounty hunter and a witch who talks in riddles, and you have a ragtag group of reluctant heroes and antiheroes who might just be the world’s last hope. It’s not exactly a noble fellowship of the ring style partnership but their mission has a similar urgency and purpose: protect the most vulnerable yet most important member of the group, and help to stop evil from prevailing. Aveyard lists J. R. R. Tolkien as one of her inspirations for this book and the comparisons certainly feel apt; Realm Breaker, like Lord of the Rings, is an action-packed adventure story that you can truly lose yourself in. It also has that epic, ensemble feel, only written in a more modern style, for a more modern audience.

“Hammer and nail, the Companions are now seven, wind and gail, bound for hell or bound for heaven.”

However, this isn’t a typical good vs. evil tale where the heroes are all noble and selfless and sympathetic. The heroes, for the most part, have already failed before the quest even begins. Instead, Aveyard’s story explores the quandary of what happens when the saviours are dead or simply refuse to help. Who will step up when there’s no one else? Sometimes it’s the unlikeliest of people who make the biggest difference – like a wide-eyed pirate’s daughter or an assassin without any allegiance or a squire who’s turned his back on everything he’s spent his life training for. It’s the characters that make Realm Breaker so engaging – particularly Sorasa and Dom, who spend most of the novel sneering and bickering at each other, which only makes them more endearing.

It’s almost inevitable in a multi-perspective novel that certain characters won’t jump off the page as strongly as others and if any character falls a little flat here, it’s strangely the one who everyone is trying to keep alive. Corayne has a lot of page time but her personality feels less colourful than her companions, who have skills, experience and knowledge that make them worthy allies. It doesn’t detract from the story – if anything, it gives Corayne more room to grow and evolve as the series continues – but it does nudge her into the shadows of fiercer female characters like Sorasa, which is a shame, given her immense importance to the story.

Realm Breaker is a book that’s abundant with characters but it’s actually more of a plot and action driven story. Aveyard’s fantasy world is vividly crafted, weaving together different factions, lands and histories to create a sense of an expansive, complex kingdom. Her talent for writing tense, exciting and palpable action scenes is second to none and it really helps to propel the story forward (not an easy task for such a lengthy book). Fans of Red Queen might be disappointed that there’s no romance here, let alone a love triangle, but that’s not to say there isn’t any kind of chemistry, of which there is plenty between Corayne and Andry, as well as the villainous Taristan and the equally duplicitous Queen Erida. There’s even some love-hate chemistry between Dom and Sorasa, who have the potential to become a staunch duo as the story continues.

Brimming with gripping action, epic betrayals, sparkling dialogue and multi-layered world building, Realm Breaker is a thrilling start to Aveyard’s new fantasy series. The last few chapters in particular are so tense and breathlessly paced that they’re sure to leave readers desperate for more.

Realm Breaker was published by Orion on 4 May 2021

6 Books To Get You Through February