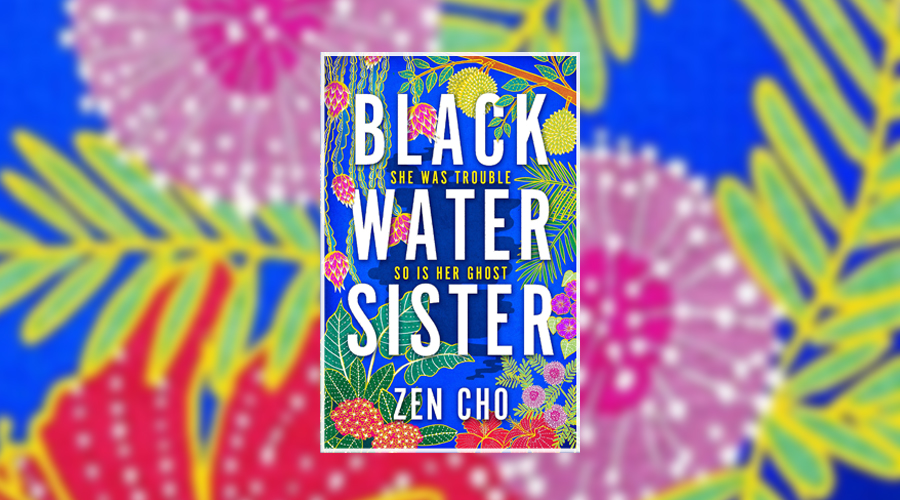 Recent Harvard graduate Jess has, to put it mildly, a lot on her plate. Although she’s lived in America for the majority of her life, health and financial troubles force her parents to return to their native Malaysia, and Jess goes with them. This puts an ocean between her and her girlfriend Sharanya, who her traditionally minded parents don’t even know exists. Once they get to Malaysia, fitting in with her extended family proves a difficult task.

Oh, and there’s one more thing: Jess has started to be haunted by her deceased grandmother, who she calls Ah Ma. Much to the chagrin of her granddaughter, Ah Ma has some unfinished business to attend to, and she needs Jess to get it done.

There’s such a lot going on within the pages of Zen Cho’s Black Water Sister, and it takes a little while to get your head round it all – chiefly the mechanics of the relationship between Jess and her dead grandma. For the most part, Ah Ma appears to Jess as a voice in her head. Sometimes though – at first only when she’s sleeping – Ah Ma has the ability to take over her granddaughter’s body, leaving Jess bewildered when she awakes the next morning and learns that overnight ‘she’ has had an eloquent conversation with her aunt in a language she barely speaks. On occasion, Ah Ma gives Jess the ability to actually see her, and she presents as a woman constantly shifting between youth and old age.

As the novel progresses, more ghosts and spirits and gods enter the picture, and it isn’t always easy to keep all of their different names and allegiances in your head – more than a few times, the task of remembering all the spectral beings, and who they happen to be possessing at any particular time, overwhelms the narrative. Whilst the scope of Cho’s imagination is laudable, it can also get unwieldy. And the action does become repetitive: after Ah Ma has taken over Jess’s body for the first time whilst she’s awake, the rest of the narrative mainly consists of that happening again and again, as she beats up an array of increasingly dangerous men and sustains an array of increasingly severe injuries.

What makes this extra frustrating is that the most interesting story here is not the otherworldly adventures with Ah Ma and her incorporeal brethren, but the terrestrial relationship between Jess and her parents, and how they are all coping with the tremendous upheaval of the trans-continental move. Jess’s mum has been hiding details of her own difficult childhood from her curious daughter. Her dad has been dealing with a cancer diagnosis, the loss of his job, and having to return home with his tail between his legs, losing respect in the eyes of some of his relatives. Black Water Sister is at its best when covering these very human troubles; it’s just unfortunate that in the world of this novel, the supernatural always takes precedence.