What is it about Dwayne ‘The Rock’ Johnson that makes the most stupid of films watchable, and even kind of fun? Few of his movies are objectively ‘good’, but just as few aren’t enjoyable. He’s in possession of that alchemic brew envied by all movie stars; a mysterious charismatic potion that pulls audiences in and keeps them on side, no matter what preposterous event is happening on screen. And fans of Johnson have a high tolerance for the preposterous.

In Rampage (based on the 1986 arcade game), Johnson plays Davis Okoye, a primatologist with a special fondness for George, the albino gorilla. When evil corporation Energyne unleashes a drug that causes George and two other animals to grow giant and rampage through America, Davis must find a solution before it is too late.

See what I mean about preposterous? Even for a movie starring Johnson, Rampage pushes the boundaries of what an audience is supposed to believe. Yet somehow, once again, he works his magic. With a knowing smile and some well-deployed sincerity, Johnson makes you buy in to this ludicrous world. Barely, but enough to see you through to the closing credits.

There’s an excellent supporting cast here to back him up. Poor Naomie Harris gets a short shrift as a geneticist/love interest; the dialogue she is given makes her sound like a talking textbook, and a badly written one at that. Malin Ackerman has more fun hamming it up as the arch villain, with Jake Lacy her incompetent henchman. Best of all is Jeffrey Dean Morgan, as an enemy turned ally. He’s no stranger to playing the swaggery southern gentleman, and it’s a pleasure to sit back and watch him do his thing. It helps that he gets all the best lines, too.

Action-wise, Rampage doesn’t live up to the standard of Johnson’s latest movies: the family-friendly hijinks of Jumanji, or the gut-churning aerial stunts of Skyscraper. It’s all a bit generic. The big set piece of the first half is a plane falling out of the sky, and the speed at which it drops is laughably slow. Sometimes, when the camera cuts to outside the plane, it’s evident that it hasn’t dropped at all. Sometimes it’s flown higher. That kind of shoddy continuity does no favours to an already anaemic action sequence. 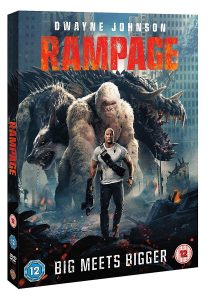 Then there’s the big, city-destroying finale, when all the enormous creatures converge on Chicago to wreak havoc. The resultant chaos is also pretty unmemorable. Buildings are crushed, people run around screaming – it’s nothing you haven’t seen before a hundred times. The sheer length of the finale makes the situation worse. By the time all the crushing and screaming is over, you’re exhausted rather than exhilarated.

Rampage is just another movie off the Dwayne Johnson conveyor belt; nonsensical, loud, and much more entertaining than it deserves to be. Though the action sequences are decidedly below par, the always reliable Johnson and a game supporting cast make it go down easy. You won’t have an edifying time, but you will have a fun one.