Remember the opening scene at the beginning of season seven? You know, the one where the liars are busy digging a grave whilst arguing over not being able to dig a grave. Well, ‘Hit and Run, Run, Run’ explains what the girls were doing in the woods that night and it’s got everything to do with roadkill…just not of the animal variety.

Carrying on from Rollins’ shock death at the end of last week, the girls realise they have a huge problem. They need to dispose of a dead body, smuggle Ali back into hospital, hide Lucas’ car and set the scene to make it look like Rollins simply skipped town. All of this and they also have to create some credible alibis in case their elaborate plan goes south. Just another day in the life of a pretty little liar.

“All we need to do is cover our tracks”, Emily says as the girls shovel dirt and bicker about whether they shouldn’t just go to the police. The fact that their initial reaction after killing a man is to bury the body and pretend it didn’t happen shows just how warped the girls’ moral compass has become. It should be simple; they didn’t mean to kill Rollins and were effectively rescuing their abducted friend. But after all that has happened, could they really just go to the police and tell the truth? Who would believe five seasoned liars? 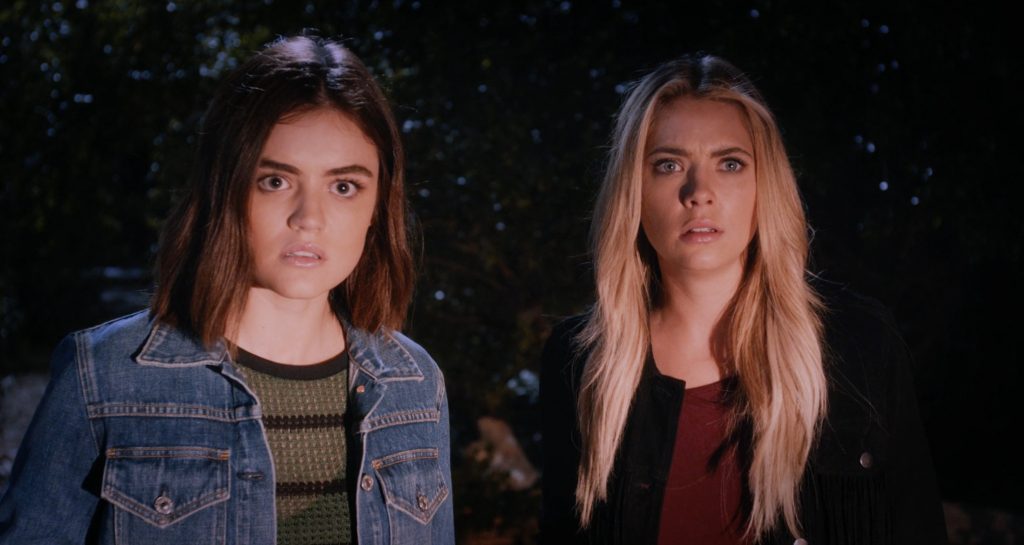 With AD and Mary Drake still a threat, the girls set about their individual missions: Aria has to get Ali back to her hospital room, avec Hannibal mask, before anyone notices she was even gone. Spencer has the unenviable challenge of making it look like Elliot left his car at the station and hopped on a train. Hannah is tasked with getting supplies to burn Lucas’ car. And Emily, well I forget what she had to do, but it was vital to the ‘make Rollins disappear’ plan.

However, the girls don’t account for external forces and their plan starts to fall apart almost immediately. First, a traumatised Ali doesn’t want to be strapped to a hospital bed again (thankfully Aria is around to give her a cute pep talk). Then Caleb diverts Spencer by apologising through a crack in the door, unaware Hannah is also listening to him pour his heart out. So we have Caleb crying, Spencer crying and Hannah crying, and there are just SO. MANY. TEARS.

Hannah manages to pull herself together but Spencer, broken after telling Caleb to go away, gets drunk, almost sleeps with a complete stranger and fails in her mission to get Rollins’ jacket on the departing train. The plan disintegrates further when Hannah and Aria go back for the car and discover it’s vanished – a familiar occurrence in PLL. Thankfully, the car-napper was none other than resourceful Mona, who hijacked the vehicle and returned it in record time with a brand new windscreen, no questions asked. 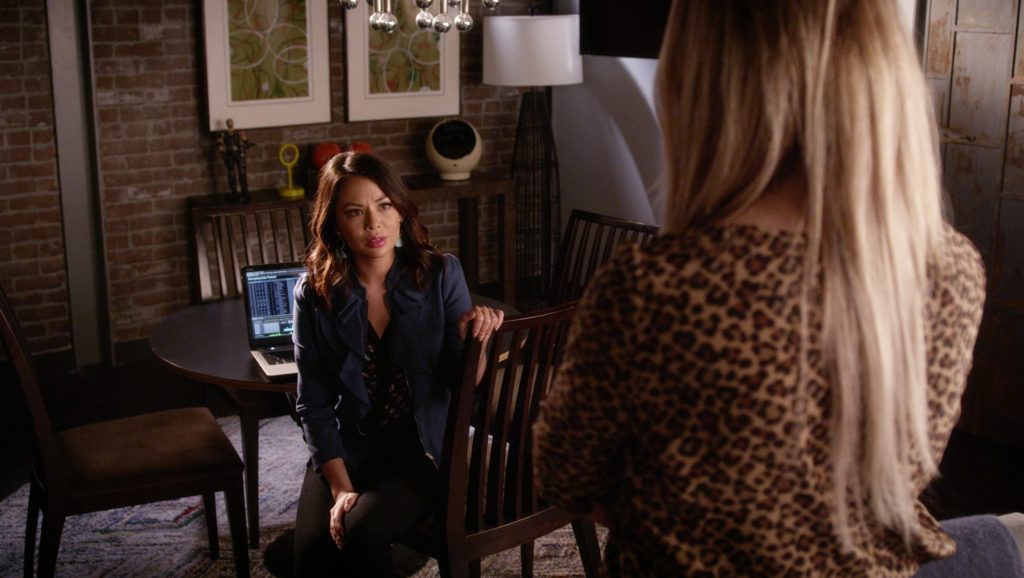 Ever the observant outsider, Mona also notices that Hannah is wearing a fake ring, something none of the other girls have spotted. With all the complicated friendships in PLL, it’s nice to take a breather as Hannah opens up to Mona about her torture and realises she can’t carry on the engagement charade forever. Out of everyone, Mona has evolved the most since season one; she’s gone from victim to psycho to actual, almost, normal person, and she seems to be the only one Hannah can truly confide in. We need more Mona-Hannah time.

Producer Marlene King promised the return of multiple characters this season and the first of what I hope will be many appears in this episode. As the girls awkwardly discuss their midnight cover up over brunch, a familiar tapping sound cuts through their conversation. That’s right, Jenna Marshall is back. And from her snarky entrance, Ali’s original victim is still holding onto that whopping grudge. She might want to make peace with Toby but her reappearance just as Rollins goes AWOL is just too convenient.

PLL is loving the big shock endings at the moment, and this week’s bombshell is the reveal that Elliot Rollins isn’t actually Elliot Rollins. At Emily’s insistence, Toby does some digging and discovers that Ali’s husband was a fraud, using the identity of a deceased doctor to get access to the hospital. So who exactly did the girls kill? And what’s his connection to Jenna? The list of possible ADs just added another suspect.