Digimon Adventure was a hugely popular show for those growing up in the late 90s/early 2000s. It follows seven (then eight) early teens who are suddenly transported to a digital mirror world from a summer camp on earth; these young people became the DigiDestined and quest to save the digital world with their friends and digital monster companions.

Digimon Adventure Tri is a direct continuation of that first generation – though many subsequent generations have spun off from the series. It’s a fantastical new adventure, capturing the best parts of the original show but allowing it to grow and mature enough to hit nostalgia for the grown ups who loved it.

Created to commemorate 15 years since the series began, Tri is a six-part movie being released in titled chapters. Set 6 years after the events of the original TV series, this places our eight heroes firmly in the high school to college bracket, around 15-18. The style of the series’ animation has been changed to match this growth, moving from the more cartoonish style to something entirely more like Studio Ghibli. Currently only available in the original Japanese with subs, an English version is due for release. Two parts are currently available, with the third instalment due in September 2016. 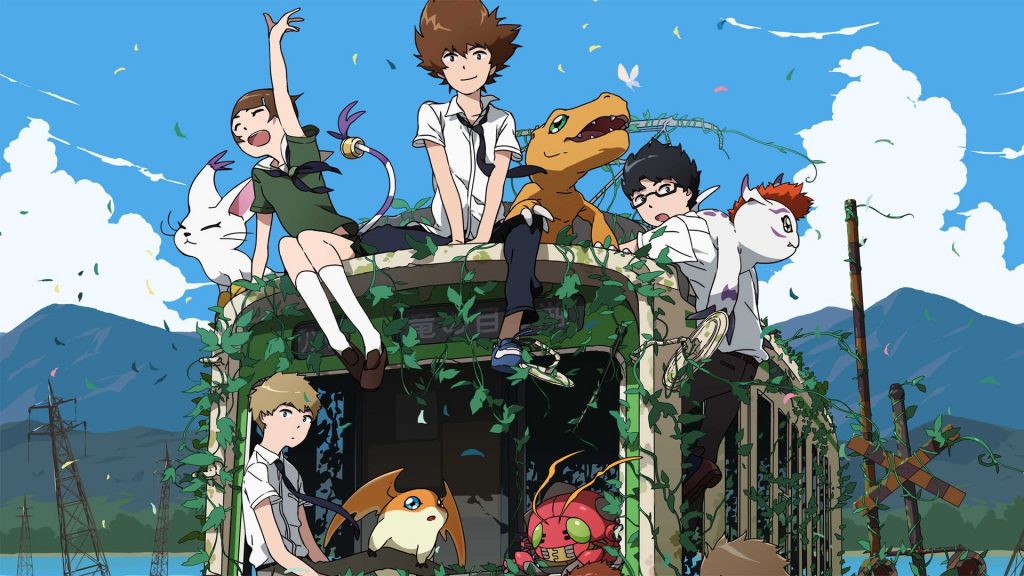 Reunion takes us back to the start, calling back to the first season, focusing on Tai (Taichi) and Matt (Yamato). Somewhat scattered, Mimi is in America, Joe is studying for college and everyone else is busy with their school lives, the team are drifting into normality. Of course, this is when danger strikes and the eight DigiDestined: Sora, Izzy (Koushiro), Mimi, Joe, TK (Takeru), Kari (Hikari) along with Tai and Matt, are reunited when a digimon crashes into the real world at Tai’s football game.

Digimon has never been afraid of placing real emotions within its characters. In fact, the key to each character’s Crest in the first two seasons was tied to an emotion or attribute. What happens each time we revisit these characters is that they are tested for their attribute again, typically because they have swayed from that core identity marker. For Tai, it’s courage, and Matt, his friendship. This is important as it’s what ties these two together and tests them in the film as a whole (so far).

When Digimon begin appearing in the city, they cause electrical interferences. This comes to the attention of not just the chosen eight but also a group of governmental personnel who appear to be tracking this phenomenon. 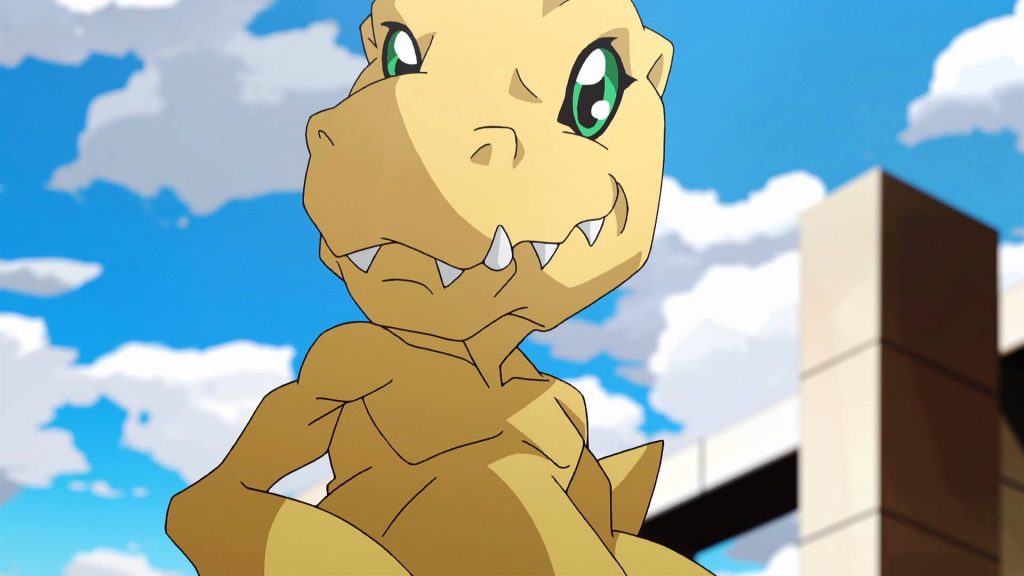 Meanwhile we also meet Meiko, a new girl at the school, who also has a digimon called Meicoomon. It’s interesting to get a new significant character and, as revealed, another DigiDestined, especially one who has no relation to the group – in the first series Kari only joins later after she is revealed to be a DigiDestined and not just Tai’s little sister. Meiko is also sweet, but very apologetic and nervous, giving us someone unfamiliar with the adventuring life many of the DigiDestined have become accustomed to.

When several Kuwagamon begin attacking the city and causing mayhem, the team are called into action. A teacher at Tai’s school, who it seems is one of the group of secret individuals tracking digimon, drives him to an airfield where Agumon, his digimon parter, has appeared. The suited personnel have gathered everyone, except Joe, to the airfield, along with their digimon partners. Together Tai and Matt defeat two Kuwagamon before a mysterious black hand appears through a portal and takes away the third.

The next day, Meiko and Meicoomon are attacked by a mysterious black digimon called Alphamon. A hesitant Tai begins to question whether they should be going into battle, because of the damage it can cause to the city. Matt struggles to understand why they are even doubting what they should do and becomes frustrated with Tai. This difference begins to cause a rift between the two. Matt does convince Tai to fight, after the other digimon are defeated by Alphamon, and together they are able to drive him off, back through a portal. Meiko reveals at this point that she is a chosen one and that Meicoomon was the target of the attack. 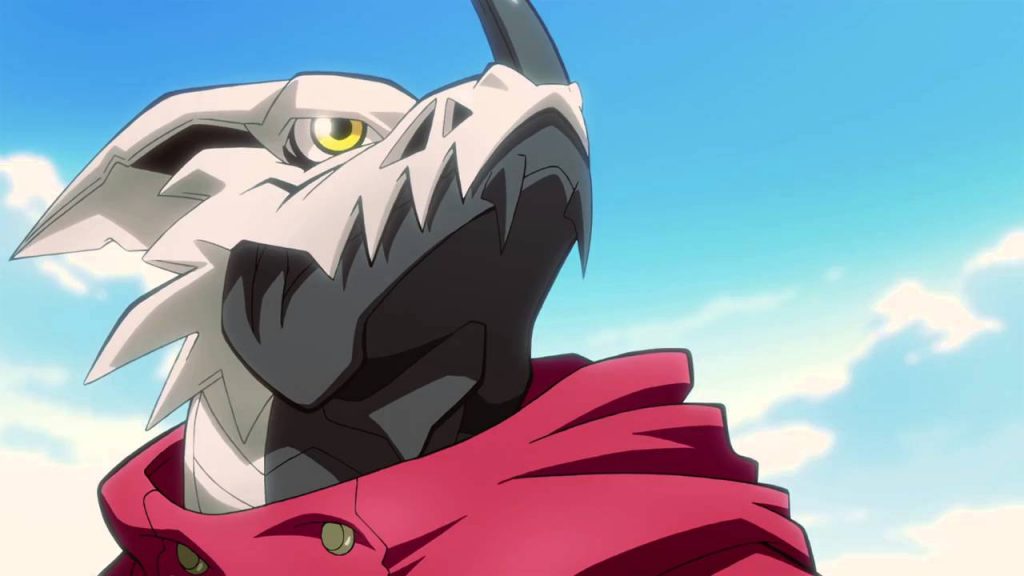 In Chapter 2: Determination we pick up our DigiDestined but with a focus on Joe and Mimi. Mimi has returned from the US full of her unique brand of energetic determination, while Joe continues to keep his distance from the gang.

As the oldest in the group, Joe has always been dealing with their adventures from a slightly more mature perspective. His crest is Responsibility in the series, initially it appears because he carries a bag in the first series full of snacks and a first aid kit that the kids need when they fall into the digital world, but also because people can rely on him to support them however they need him to. He’s trusted.

Mimi, meanwhile, uses fearlessness to drum up new enthusiasm at the school. However, her driven nature and disinterest in the uncertainty of her classmates doesn’t win her any new friends. Instead, she and a coerced Meiko set up a cheer (as in leader) cafe in the school for the school festival.

Ogremon then appears, but not as his usual friendly self (as seen in the first seasons). With digimon getting a negative reaction from people in the city, especially following the recent attacks, Mimi attempts to drum up some positivity by heading out alone to face Ogremon. Unfortunately, her partner Palmon, after digivolving into Togemon, causes further damage with her needle-spray attack. She downs a helicopter and Ogremon is pulled through a portal by Leomon, back to the digital world.

In a particularly touching moment, we see Mimi struggling with her mistake and realising her selfishness. At the same time, Joe is feeling unable to cope with the stress of his exams, the expectations to have a normal life and become successful. His distancing from the team and his partner, Gomamon, leads Gomamon to run away – though he remains safely with the other digimon who are with Izzy. The two meet, observed by Kari, late at night as Joe cries beside the river. Mimi, similarly troubled, finds solace and the two share their fears, Joe for not being able to be reliable to the other DigiDestined in order to serve out his life, making him feel like a coward, and Mimi for her reckless selfishness. It’s with this that they realise both their errors and the power of their choices. Mimi’s sincerity has always been her strength, but she needs to know when to quell it. Joe learns that his responsibility is to himself and the people who need him, like Gomamon. 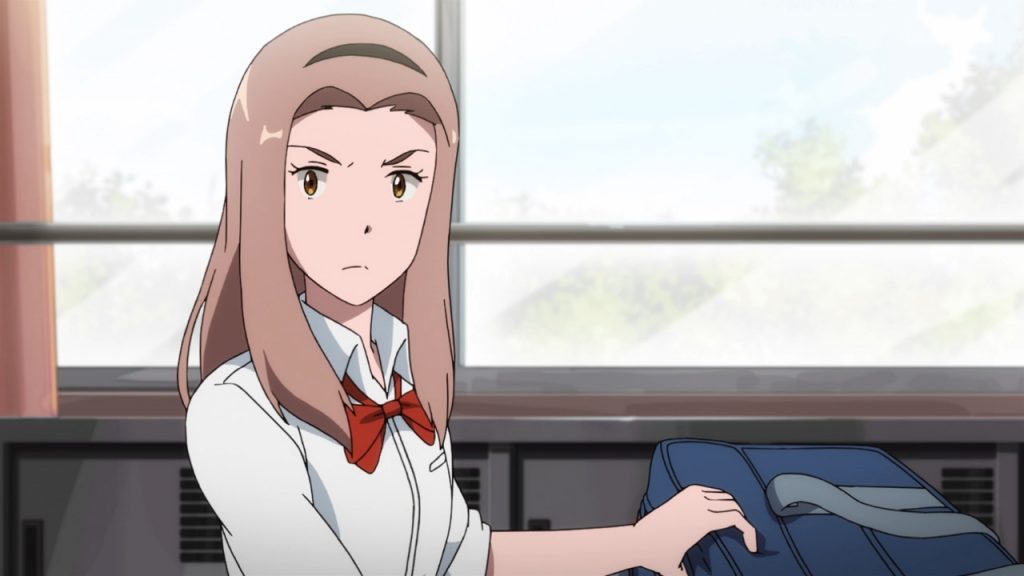 Meanwhile, Leomon has come back from the digital world and is working with the other DigiDestined and explaining how Ogremon changed once he become infected with something unknown in the Digital World. At the school festival, with Mimi reinvigorated and with Meiko now pushing to support her cafe idea, Meicoomon meets up with the other digimon partners and they go to explore the festival foods. Meicoomon becomes separated, but is found by one of the digimon trackers. She leaves Meicoomon unattended and a portal opens to reveal Ken Ichijouji, also known as the Digimon Emperor, a role he appears to have resumed.

Interestingly, Ken is the only member of the second generation who has reappeared so far; with a short shadow sequence showing the figures of the second generation DigiDestined being knocked out. As someone who briefly came around to the “good side” within his series, what set him apart, other than his controlling ways, was that he never earned his Crest, which was the Crest of Kindness.

Ken pulls Meicoomon through a portal just as Palmon and Gomamon arrive with Leomon who is now partially infected. Although the digimon race through the portal, none of the humans are able to pass through. While Mimi is there to support Palmon, Gomamon is left unable to digivolve without Joe. Ken attacks with Imperialdramon as Kari convinces Joe to join back up with Gomamon. Racing to the battle, Mimi and Joe are then able to mega digivolve their digimon for the first time into Rosemon and Vikemon respectively.

Unlike the first episode which reiterated the core values of Tai and Matt, in Chapter 2, Mimi and Joe have grown and learned, leading them to the reward of their digimon partners reaching a new stage of evolution.

Leomon is able to stave off the infection and the team rescue Meicoomon. But, in a twist ending, Meicoomon suddenly switches and kills Leomon in front of the kids before escaping to the digital world.

These first two chapters are gripping and emotional, giving us more adult themes and styles while maintaining the thrilling adventure style of the series as a whole. Well worth watching.