Why You Should Be Watching: EastSiders

EastSiders is a web series – turned recent Netflix release – about a gay couple as they deal with the Christmas revelation that one of them has been cheating and how it changes their lives. Across two seasons, which were a few years apart in production, EastSiders explores Cal and Thom’s changing relationship, including open relationships, heavy drinking, their closest friends and living in LA.

Creator and one half of our central couple, Kit Williamson, plays the (initially) scorned lover, Cal. Van Hansis is his aspiring writer boyfriend, Thom, whose infidelity and accompanying article about longing for sex outside of committed relationships is one of the causes for the changes in their lives. Simplistically, this is where we begin the story, several years into their relationship. By the end of season 1, and especially by the finale of season 2, you have learned to understand the other factors that led to the moments we see in the first episode, how both Thom and Cal approach the issues within their relationship. Their motivations and intentions on a daily basis, let alone in the long term, vary greatly, turning them into the people who cheat or drink too much.

In many ways, when we enter Cal and Thom’s lives, we’re meeting them on the cusp of exploring what to do next. Do you they need to be monogamous? What would an open relationship feel like? When you love someone, is cheating more acceptable if it becomes inescapable? Again, it ponders questions, raising them but never dictating to the audience that they should be a certain way and have a clear answer.

Described as a dark comedy, EastSiders is instantly enjoyable because of its dark humour. The biting snipes from all the couples, and even duos, cements the kind of relationships these people have with one another. They can be cruel to each other, but only up to a point, though that point is much further than ‘nice people’ would be comfortable with. In many ways the show is about how uncomfortable they are with their lives, somewhat drifting but still making big life decisions.

What makes the show refreshing it that you can recognise more of real people in these kinds of characters, than you can in glossy prime time shows. People are flawed, but not in a “notice me and my clear failings!” way, they’re just people. There aren’t instant revelations but you feel the growth over time. Forgiveness is somewhat earned, mistakes are made and are sometimes unresolved.

It’s an endearing balance between showing a certain group of people in a kind of realistic way, and creating something that is episodic, comedic and entertaining. While it’s a show made up of chosen scenes, they don’t feel so cut and dry each time. There’s an organic melding between the scenes and episodes that feels lifelike. 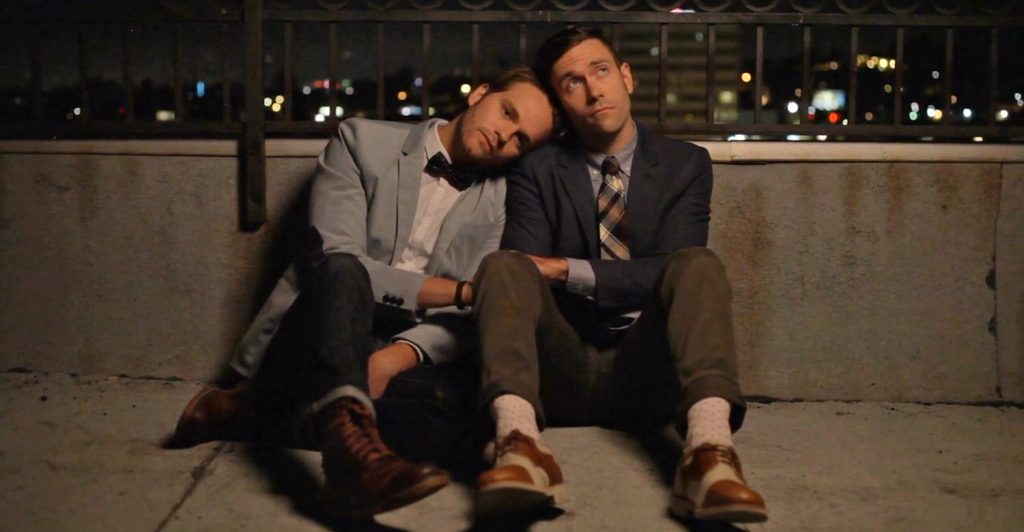 Matched against Cal and Thom’s central relationship is that of Cal’s best friend Kathy; the atypical brilliant yet terrible BFF, played by Constance Wu, and her boyfriend Ian (played by Williamson’s husband, John Halbach). Their romance is dealt with alongside Thom and Cal’s, but their issues stem not from infidelity but how they negotiate staying together past the 6-month mark. It’s about adjusting to each other’s personality, the quirks that you see when you’re with someone in an intimate setting all day, every day.

We get plenty of additional comedy from the wonderful Stephen Guarino as Quincy, friend to the group and club promoter for the local gay bar. His sour remarks and uplifting spirit are perfectly matched to his club themes. Such as the “end of the world” party he hosts with Rent CDs used as earrings and bibles handed out at the door with highlighted passages so they can prepare for the end of days (but not really). It’s absurdist, yet brilliant, and is so impactful for two reasons. Because the parties and Quincy are used in contrast with the other characters who are at serious moments, and due to Guarino’s fast-paced delivery and mocking tone from Quincy.

EastSiders isn’t a long series, but it’s long enough to love. It’s interesting and well thought out with great acting from the whole cast, especially the core four: Williamson, Hansis, Wu and Halbach. Enjoyable and funny, it never loses its pace.

Granted it has basic similarities with other popular LGBT web series: attractive stars, plenty of booze and gay men as the focal point. But it doesn’t fall back on tired ideas by using sexuality as the most important talking point. It also removes the glossy layering that can make these series seem too contrived. Instead it has a raw directness that you’re drawn to, diversifying both the cast and the relationships as the two seasons progress. It’s worth watching, and then rewatching. And hopefully we might get a season three.