It’s finally here! The new episode of Pretty Little Liars aired on Netflix today and it was well worth the wait. It was great seeing all the original characters coming together, with the best having to be a continued reunion between Hanna and Mona.

So, last year’s mid-season finale saw the girls terrorized by Noel Khan and Jenna, culminating in Spencer getting shot. We assumed it was Jenna who fired the gun, but when Jenna was taken by A.D. we heard her say “did you shoot spencer?”, and this week the ever pleasing to the eye Detective Fury was on the missing gun trail. By missing gun, he means a missing gun and also a missing Jenna, Mary Drake and Archer.

Having accidently chopped Noel Khan’s pretty little head off, the girls were hoping their theory about Noel being A.D. was true and that the games were over, but hope never lasts very long in Rosewood. And so, early into the episode, Spencer was delivered a nice big present in the form of a board game. Not just any board game though, it’s a board of Rosewood with an iPhone programmed specifically for that game.

The girls agreed not to play, but when Mrs. Hastings arrived home and confirmed that Mary Drake was telling the truth about being Spencer’s real mother, a little anger, red wine and a persuasive text from A.D. encouraged Spencer to start the game on her own.

Given the choice of ‘TRUTH OR DARE’, Spencer chose a dare which saw her visit Toby in hospital (A.D. knows she kissed him, obviously). She completed the visit and headed back to the barn to claim her reward: a letter from Mary to her child, alongside the first jigsaw piece. It’s safe to say the liars had mixed emotions at Spencer’s spur of the moment play, but it’s done now, and I wonder who will decide to join the game next? My guess is Aria. 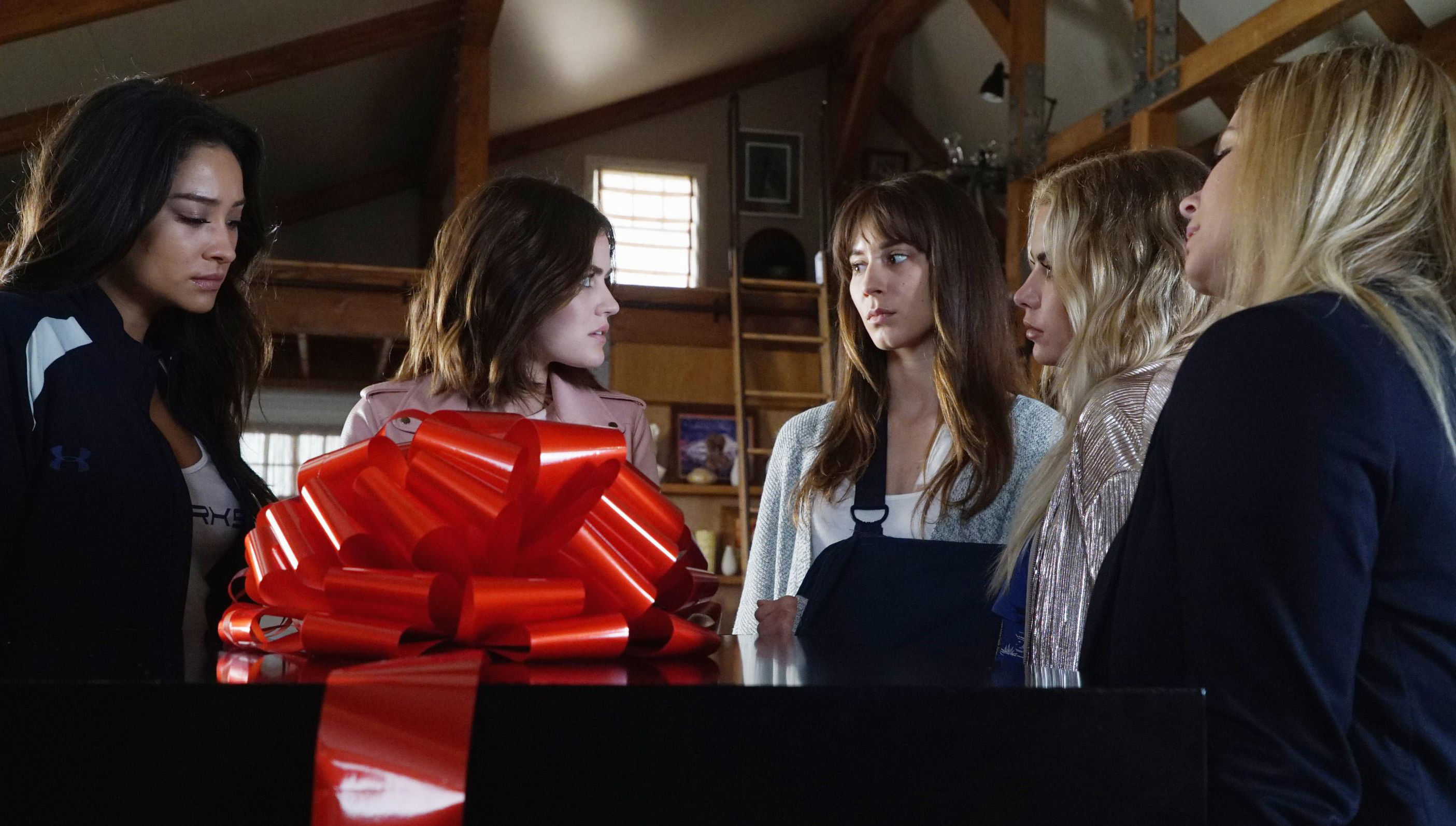 Speaking of Aria, she was all set to leave Ezra’s apartment when he arrived back from seeing Nicole – who’s back from the dead – and told her to stay. With Nicole in a fragile state, she still has no idea that Ezra and Aria are due to be married – if they ever do get married that is…something always seems to get in the way with those two. Hanna and Caleb, on the other hand, are still screaming GOALS!

The Paige, Emily and Ali triangle – which has been bubbling under the surface for a while now – also developed this week, with Paige certain that Ali’s trying to drive a wedge between her and Emily, and Ali suspicious of Paige for the same reason. Why can’t Emily just find a normal relationship?

As for Ali, she’s still pregnant and it looks like she’s keeping the baby. But she’s also keeping it from the other liars too…

I have to admit I’m excited to see where things lead, especially with Emily, Ali and Paige all working at Rosewood High. It’s going to be like high school all over again, but this time Paige isn’t so afraid to speak back (there was a board meeting where all three were present and Ali let her claws out ever so slightly).

My major excitement whilst watching this episode was Aria bumping into Holden, her old high school fling and the boy she grew up with, whilst wedding planning. When he escorted her home, and saw how tense her relationship with Ezra was, he definitely seemed to have ulterior motives. Could he have something to do with A.D.? Or has he been brought back to give Aria a way out of her engagement?

Despite spending time with each of the liars individually, I was hoping for a little more from ‘Playtime’ after such a long hiatus. I expected the last ten episodes to be quite fast paced, although there’s still time for it to pick up and I’m looking forward to next week’s ingeniously titled: ‘These Boots Were Made For Stalking’. Hopefully it will deliver more of the answers we’ve been promised in the latter half of season 7.

Predictions after watching this episode:

Pretty Little Liars is on Netflix now and the next episode will be available on 26th April.