Antibirth, a truly terrifying choice for a midnight showing at Sundance Film Festival, is perhaps unlike any film you’ve seen before. Indeed, if this is in any way similar to your regular viewing I highly recommend seeing a psychiatrist. It’s impossible to know exactly how messed up this film is until the final scene or two. In fact, it’s only then that the sci-fi genre becomes remotely applicable.

The film manages to keep an extraordinary, and quite frankly preposterous, story firmly grounded in reality until the very end. It could even be argued it has a similar level of social commentary than that of Danny Boyle’s classic Trainspotting (although coming off heroin cold turkey in Scotland is still a preferable activity to pretty much anything in Antibirth). This is important as it helps Natasha Lyonne – who plays an extremely difficult part with tremendous power and belief – to somehow make her pill-popping, spirit-swigging, bong hitting pregnant character, dare I say it, sweet, maybe even adorable, but certainly likable.

Antibirth begins with Lou (Lyonne) dealing with the notion that she could be pregnant. As one might imagine this isn’t the joyful news it would be in a Nancy Meyers’ film when the protagonist makes her living from sleeping with men and taking cocaine.

It’s clear to the viewer from the start that this is more than just a conventional pregnancy as her mind jolts back through time offering blurry snippets of memories that are so warped by drugs I wondered if the film had somehow emitted some kind of acidic vapour through the screen and into my lungs as I saw the world through Lou’s eyes. After all, that’s about the only way this film could be made weirder. 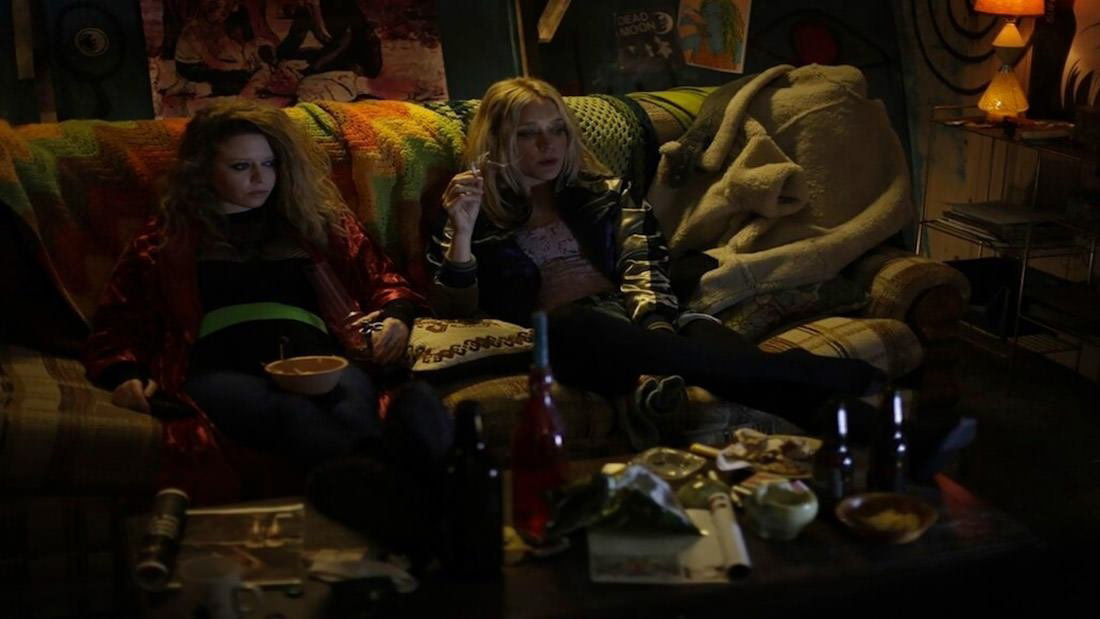 What should be morning sickness and mild discomfort is delusion and hair loss. And that’s just the beginning. I won’t describe the remaining stages to you but suffice to say, this film is not for the faint of heart. One graphic nightclub toilet abortion scene is followed by a body discovered as if inside out, but it’s the long and detailed popping of a blister encompassing almost the entire foot that probably makes for the most difficult viewing.

Antibirth isn’t perfect though. The eerie surrealism mostly hits the right notes but is sometimes discordant. The timing is as hazy as the rest of the feature and, even post-viewing, it’s not clear what order certain events occurred in or moreover if anyone at all from Perez to Lyonne could detail a timeline of events with any degree of confidence. To a certain extent though, this really doesn’t matter. The film is undoubtedly hard-hitting and makes a lasting impression for the right reasons rather than the wrong ones, which is a rarity for psychedelic sci-fi/horror adventures.

Antibirth (cert.15) is available on Digital and DVD now, courtesy of Solo Media and Matchbox Films