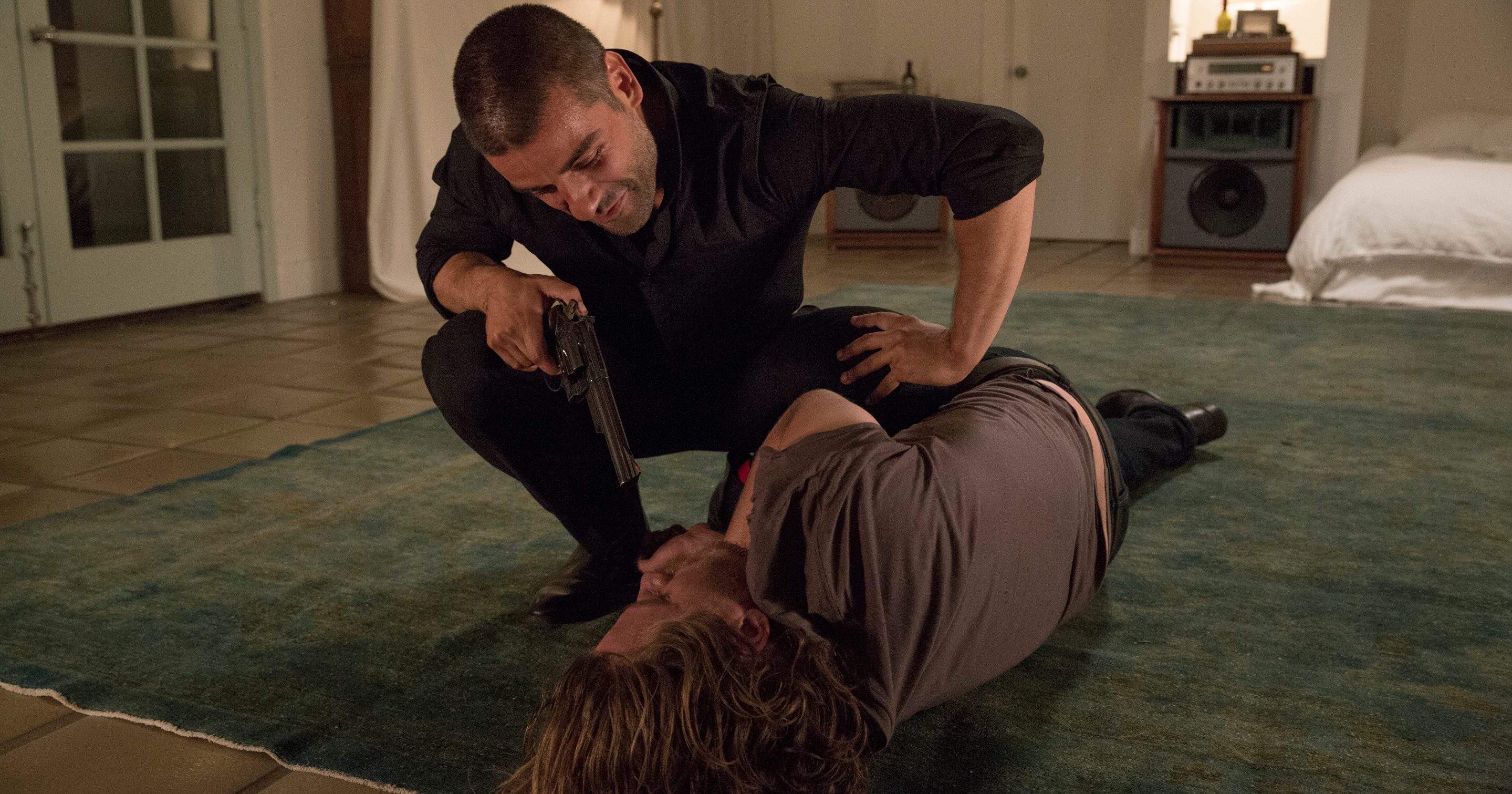 There’s a moment in Mojave where Garrett Hedlund’s frustrated filmmaker Thomas is talking to a camera. “You go into the desert and find out what you want, what you are”, he says. It’s just one of the many philosophical lines of dialogue that are not so subtly thrown at the audience throughout the 89 minute running time. And whilst the barren desert landscape does help him to discover these two things, the problem is, the audience actually doesn’t care.

William Monahan’s classical thriller opens with borderline suicidal Thomas jumping into a jeep and driving maniacally into the Mojave Desert. His reckless driving causes him to crash and he ends up spending the night drinking in quiet solitude and drowning his demons in the darkness. Enter Oscar Isaac’s longhaired drifter, who instantly sets Thomas’ alarm bells ringing as a threat. Thomas isn’t a talker, which is just as well, as Isaac’s Jack rather likes the sound of his own voice a little too much. 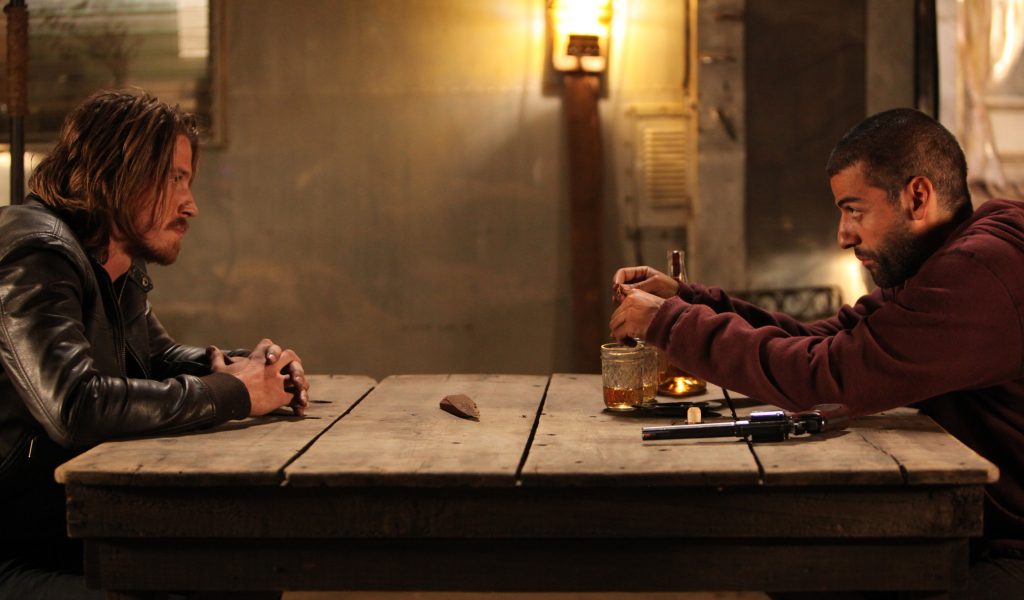 Their deep-thinking conversation and coffee over the campfire ends in tragedy, as Thomas suspects Jack isn’t as friendly as he’s pretending to be and accidentally shoots someone else whilst trying to flee Jack’s pursuit. Thomas goes back to his house in the hills and tries to forget the fact that he’s killed a man, but Jack has no intention of taking the fall or letting his new friend get away with it. He tracks the moody filmmaker down and a game of cat and mouse ensues as the two men try to outwit each other. It’s a game of survival, which both Thomas and Jack believe they’ll win because they’re just as narcissistic as the other.

There’s a good plot buried under the heavy sand of Mojave but it’s stifled by the contrived, literature quote-filled script and messy delivery. The abrupt start throws the audience headfirst into Thomas’ existential crisis but doesn’t ever try to explain why he feels the way he does. He’s a man who seemingly has everything – a wife, a child, money, a beautiful home, a successful career – and yet he doesn’t value any of it. He’s battling demons but we don’t really know what they are except the film industry and LA lifestyle – these we can guess from his volatile attitude and complete apathy towards everything in his life. All being said, he comes across as a bit of an arsehole, with little to no redeeming qualities aside from the fact that he can rock the ‘cool indie filmmaker’ look (he does this very well). 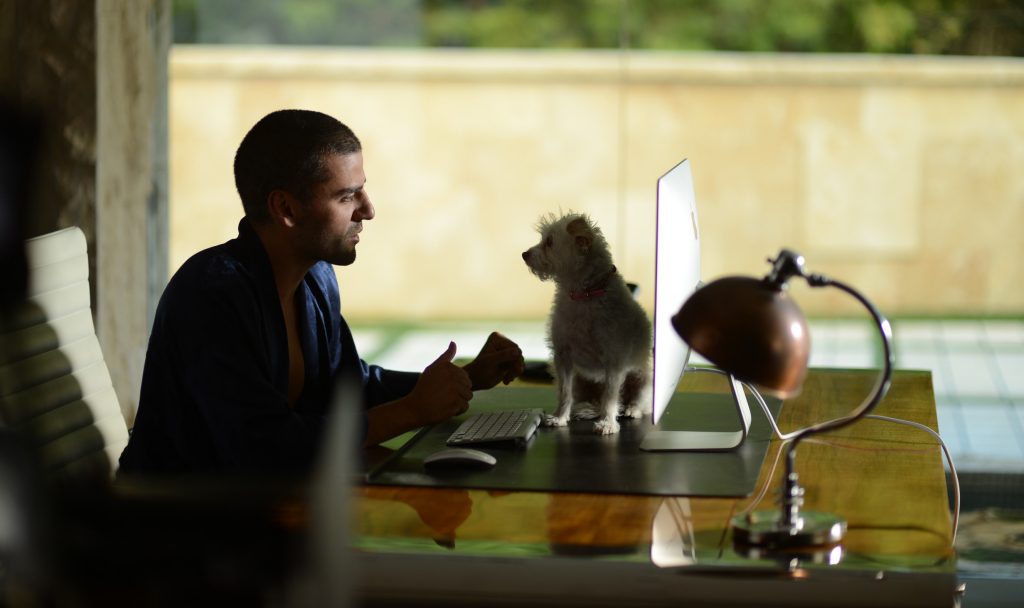 Hedlund’s character spends the first quarter of the film in angry, brooding silence, making it impossible to connect with him. In contrast, Isaac’s Jack is overwhelmingly charismatic (it is Oscar Isaac after all) but he’s a psychopath with a chip on his shoulder who calls everyone “brother”, something that becomes more and more grating as the film progresses. 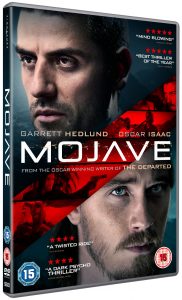 “Do you know yet which one of us is the bad guy?” Jack asks Thomas in one of their hostile scenes together. His point is crystal clear: there are no good or bad guys, just two people battling with their own devils. The desert is a nice metaphor for how they both feel about themselves and the world but it just doesn’t feel very important to the audience.

For a thriller, there’s a distinct flat and disjointed tone to the plot. The monotony is briefly alleviated by some genuine moments of tension towards the end, where Thomas and Jack’s game comes to a head (Hedlund and Isaac are magnetic here), but it’s too late to make you care about what happens to either character. For a story with so much to say – and it really does waffle through line after line of existential crap – Mojave doesn’t speak to its audience, making it a film you’re likely to forget soon after watching.