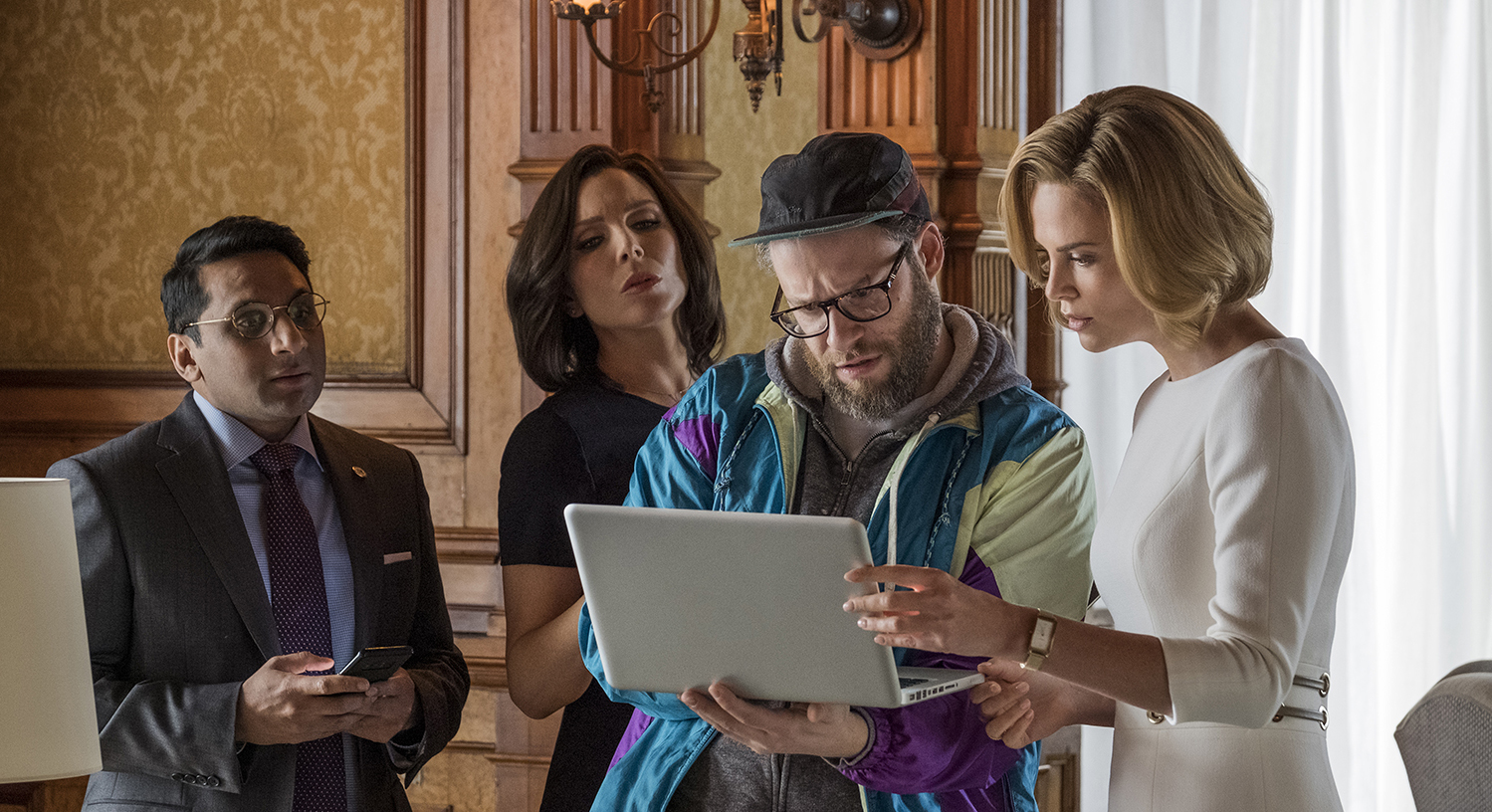 On paper, the idea of a romantic comedy so intrinsically tied to and directly addressing the current political climate seems, well, nightmarish. By their very nature, romantic comedies have a two-fold (both for romance and comedy) goal of seeking to hit that escapism sweet spot. In the hellscape that is our world, it’s no surprise they’re seeing a resurgence (largely from streaming services like Netflix, or the ever-rare box office hit Crazy Rich Asians) right now, where it’s more and more precious to forget the world outside the cinema for two hours. Long Shot allows no such indulgences.

We open with Seth Rogen’s Fred Flarsky, a journalist, infiltrating a Neo-Nazi meeting and quite literally inexplicably making it out alive after throwing himself out of a window. After quitting/being fired because of a political conflict of interest at the outlet he writes for, Fred attends an event where Boyz II Men are performing and he re-meet-cutes his childhood crush, Charlotte Field, former-baby-sitter-turned-Secretary-of-State (hello, transparent Hillary parallels). Charlotte is your classic Washington female success story. She takes meetings at four in the morning whilst doing tricep dips, and fields sexist questions no male politician would be asked (unless there are outlets out there pestering Boris Johnson for his haircare routine).

In many ways it’s bleak, because the comedy is rooted in something so tragically real, and in those same ways it’s cathartic to see it actually addressed. But there’s a master amount of levity, much like in our own daily lives, to balance out all of the hopelessness and darkness. The two begin working together as Charlotte begins to set herself up for a presidential campaign, and needs a fresh, funny writer like Fred to shake up her speeches. Travelling the world, they reconnect and share their lives in a way that quickly becomes deeper than simply getting good public speaking material.

Seth Rogen is having a good year. It only makes sense that 2019 would be the year he masters the rom-com love interest/co-lead. Who would have thought, that with very little clean up or rom-com-standard makeover he would achieve such dreamy status? All it took was an earnest, sensitive portrayal of an earnest, sensitive guy, ultimately willing to compromise on what he believes his life should be, in order to support his accomplished female scene-partner, even as they are equally as passionate and ambitious. This, for once, isn’t a case of a schlubby guy getting with a woman far more conventionally attractive than he is. Like, he is very much that, but what a difference one simple thing makes: he respects her, admires her and is fully aware she could do much better. It makes sense Charlotte is taken in by it.

Speaking of, the film only works because it’s a true two-hander. Theron is an underappreciated chameleon – quite literally in some cases, as she is unrecognisable as Megyn Kelly in the upcoming Bombshell, but also because how could the same person inhabit this role, Monster and the villain in 2017’s The Fate of the Furious. It’s both infurtiating and typical that she’s perfect as your type-A, adorably charming rom-com lead – handling the comedic moments as easily as the dramatic ones. Though maybe two-hander is not too accurate a term itself, because there are plenty of familiar supporting faces from the best sitcoms of the last couple of years, which is its own little treat. 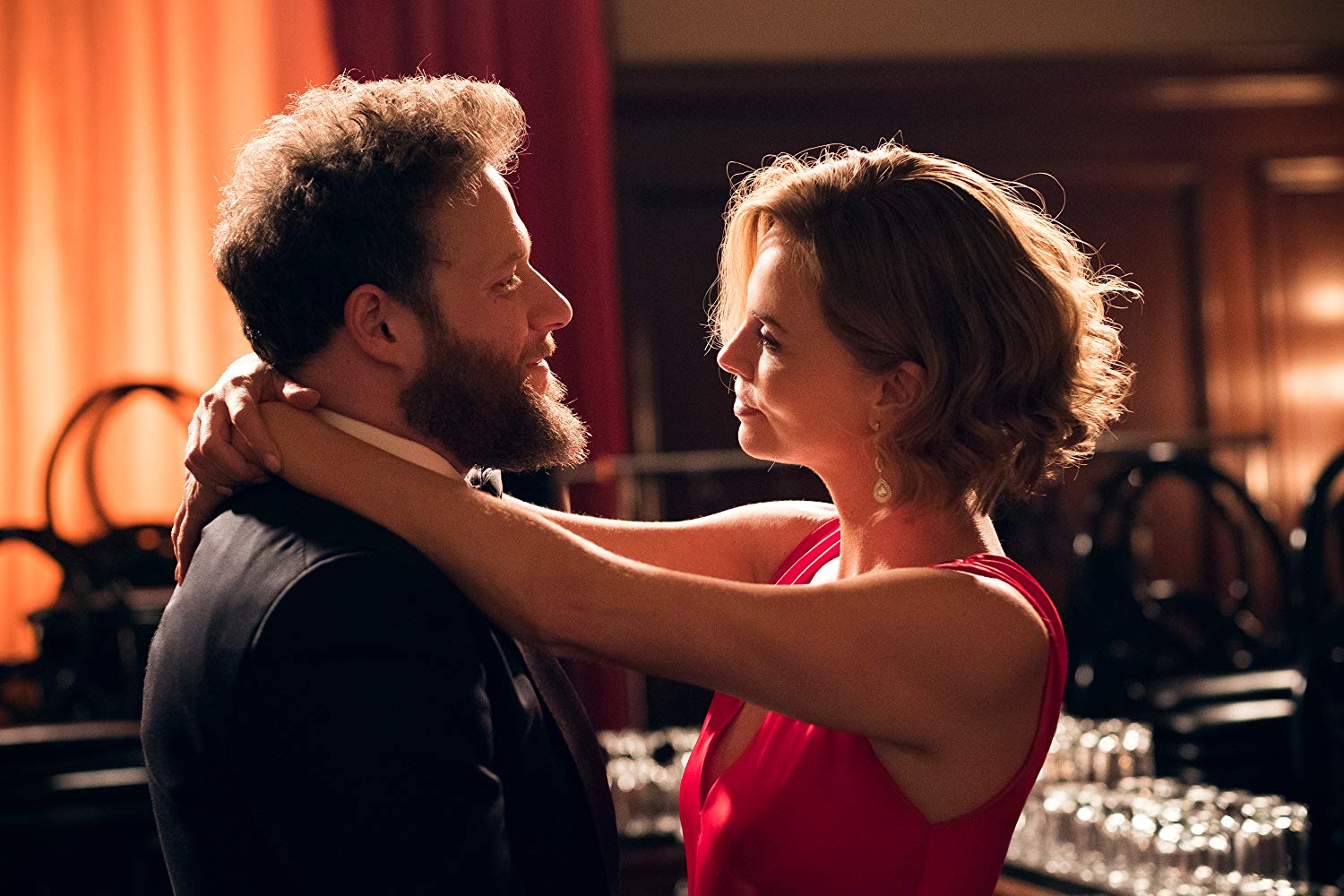 As much as the politics are rightfully addressed, the more interesting stuff is the romance. Without it being as good as it is, everything about it would fall flat. The stakes, after all, are that they’re an unconventional pairing, particularly for someone like Charlotte seeking to take up residence in the White House, and the game she has to play to get there. We want them to work it out as much as we want Charlotte to succeed. It is crucial that their goals and principles align, and the script knows that. At no point does it feel forced because at the end of the day, despite their differences in status and social capital, their version of a better world is the same. Which, in a very 2019 way, is a vital part of any successful relationship, and helps us root for them even more.

Of course it’s naive to imply rom-coms aren’t political by nature, and always have been. After all, they deal with our (particularly women’s) desires for ourselves and for the world. But Long Shot is literally political. It is wish fulfillment not just in the sense of the romance, but of the political climate as well. It’s a film as dissatisfied with the current state of the world and just as confused as we are about how we’re supposed to fit into it. It can’t and won’t changeanything about the state of things, but it’s nice to have a film figuratively pat you on the back, look around with you and say, “I know, right?”

Because the truth is, Charlotte Field wouldn’t win an election after some of the scandals that crop up throughout the film. The game of how one wins an American election is there for a reason, and while we wish it weren’t the case, and maybe people will continue to be able to push it, for now those hoops are as immovable as ever. But that’s not the point. Don’t we wish she would? Isn’t it more modern? More human? Less 2019?

The DVD’s special features include some lovely behind-the-scenes footage we don’t get enough of anymore. The writers and story developer Dan Sterling break down their thinking behind many elements of the film which show how thoughtfully and carefully made it was, such as the choice of 1980’s references. It reflects not just the age of the characters, but that Charlotte herself has been culturally stagnated due to her career pursuits, and how they wanted the film to feel rooted in the classic rom-coms of yore. It’s a nice reminder, in a cinematic climate of franchises and reboots, that there are ways to pay homage to the greats while creating something new and deliberately current.

Long Shot is out now on DVD and digital download.

Kubo and the Two Strings Review