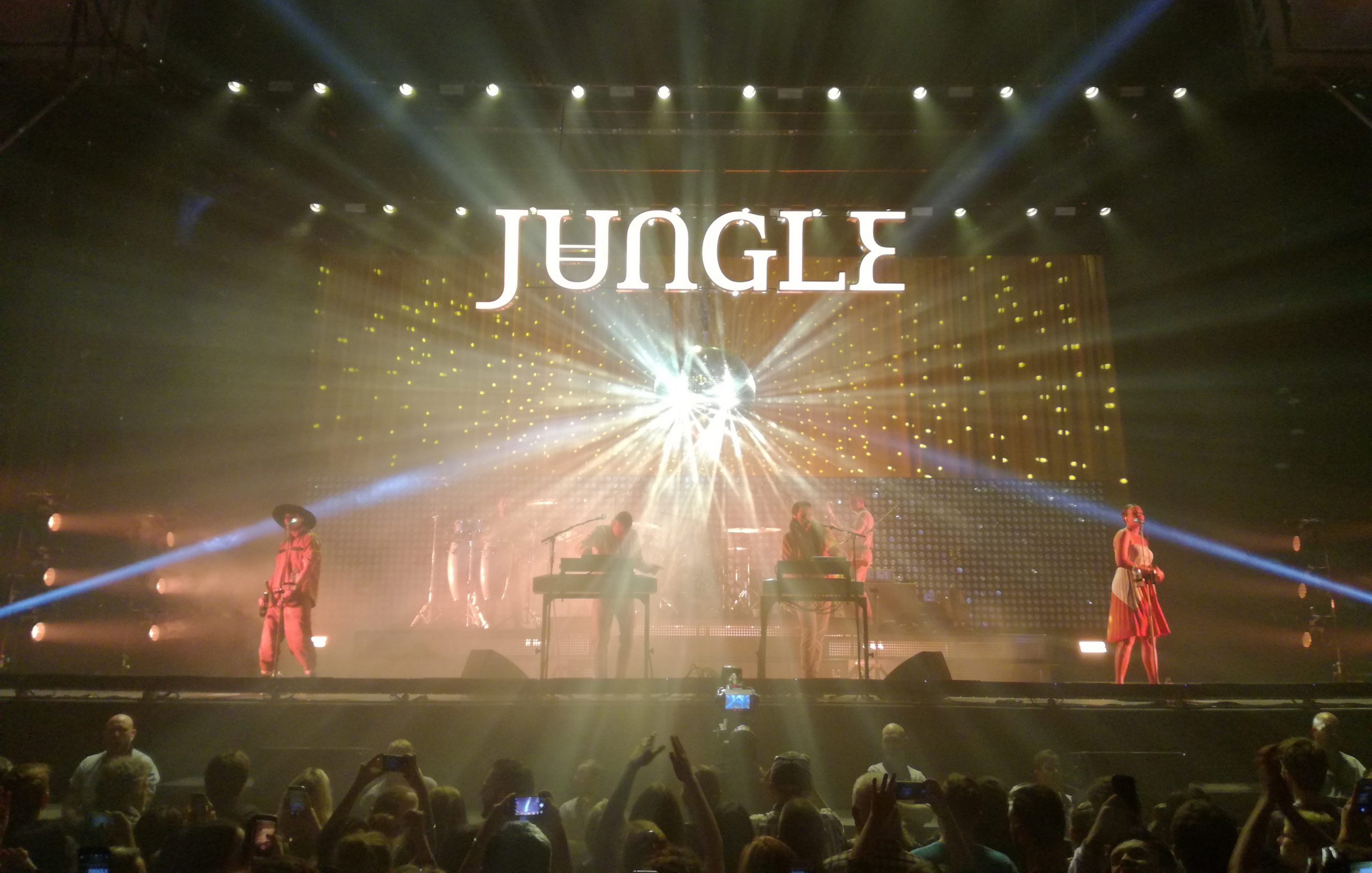 It’s a rare and beautiful thing to watch musical meritocracy in action.

The death of the music industry was much over-exaggerated in the noughties. It didn’t go away when Napster stole its income streams – it slunk away and evolved. Now it feeds itself on ill-won Grammys and BRITs, paid-for mainstream radio playlists and sickly, gloss-lipped Instagram influencers. The word ‘Best’ has become interchangeable with the phrase ‘Most Marketed’ when appended to ‘Artist’.

So it is that tonight’s headline show at Alexandra Palace comes as a welcome cloudburst of brilliance in the pop desert. Jungle, as we have stated on more than one previous occasion, are otherworldly in their excellence. On their records they’ve achieved an exquisite and original sonic dream. In their live shows they embody the simple power of good music played well. Taken together, they are a phenomenon in the offing – a coming byword for untainted class. 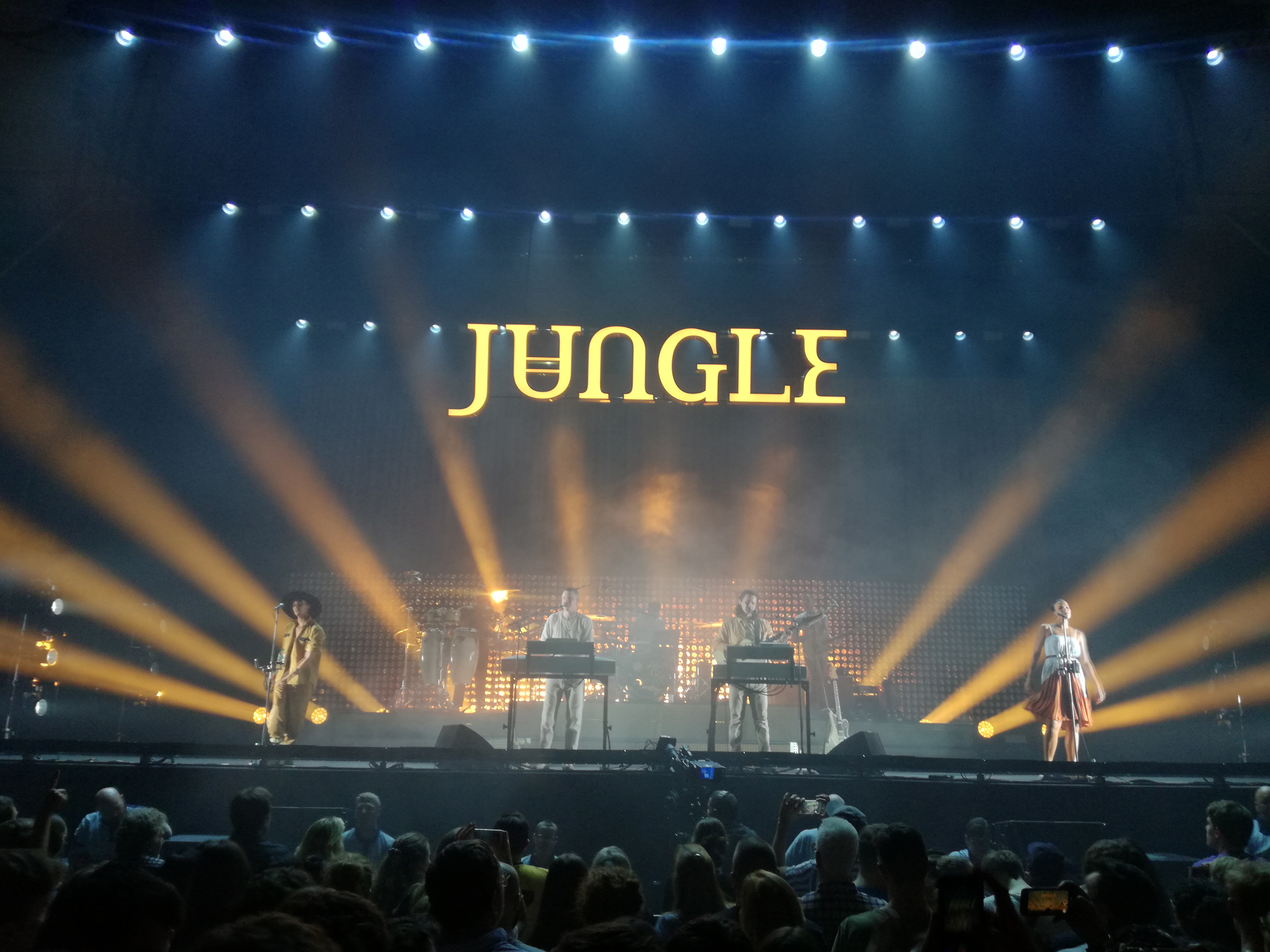 Jungle’s last London show was at Electric Brixton in 2017, a little sweatbox club that holds no more than a few hundred punters. To jump from there to the cavernous gawp of Ally Pally in little more than a year is no mean feat – and it’s a sign of earned success. The atmosphere in the Palace tonight is light and upbeat – the faithful know they’re in for a rare blessing, and the new initiates have heard the tunes. They can guess it’s going to be an ass-wiggler.

Support is ably provided by Little Simz, who treats her half-hour slot like a headline gig, stalking the stage with megaphone in hand, firing articulate rap at the rose window behind us. It makes for a pretty epic start, one of those rare supports that makes you thankful that you rocked up early.

And Jungle? Ah, Jungle. In Electric Brixton, their soul rocket went off like compressed air from a broken pump – smooth and powerful, blasting your hair back off your forehead. In Alexandra Palace, the added scale gives them the aspect of wizards. Glittering, blazing messengers pouring forth magic into the ears of the gently grooving throng. There’s just no way to describe their show without lapsing into fantastical hyperbole. They are consummate showmen and women, immaculate musicians and masters of the lost art of light shows. A Jungle gig is as close to the naked spirit of live music as you’re likely to get, slick production or no. 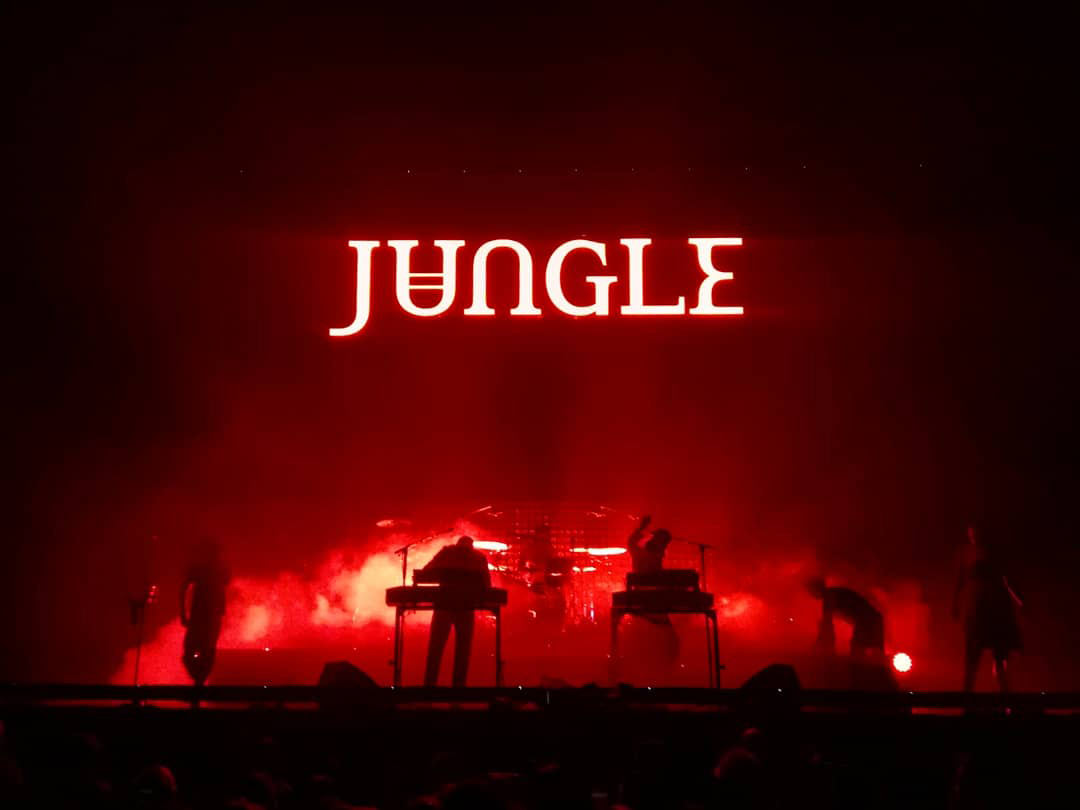 Above their heads, their golden logo hovers, tilting towards us in beneficence. It’s the UFO version of KISS’s spangled moniker, written in weird script that looks like it’s been dredged up from some subsea meteorite, the etchings of a higher life form. In the lead-up to ‘Beat 54’, a mirrorball descends from the ceiling to join it, and then, in perfect synchronisation with the intro’s syncopation, the gold spots cut and blazing whites land on the globe, firing innumerable lances stagewards, heavenwards, into our eyes and our brains. It’s the first and last word in cool, a switchback so aching that you can’t help but groan with pleasure. That the music which follows is flawless goes without saying.

It only carries on in that vein. ‘Lemonade Lake’ and ‘Pray’ are deep-cut highlights, the spiralling chords reverberating off Ally Pally’s venerable walls, the effervescent light screen bubbling and rippling to the flow. The mix is earth-shattering, surprisingly loud but clear as a bell, with stacks of bass collapsing over our heads, thudding kick and sly claps striding through the sound with ease. 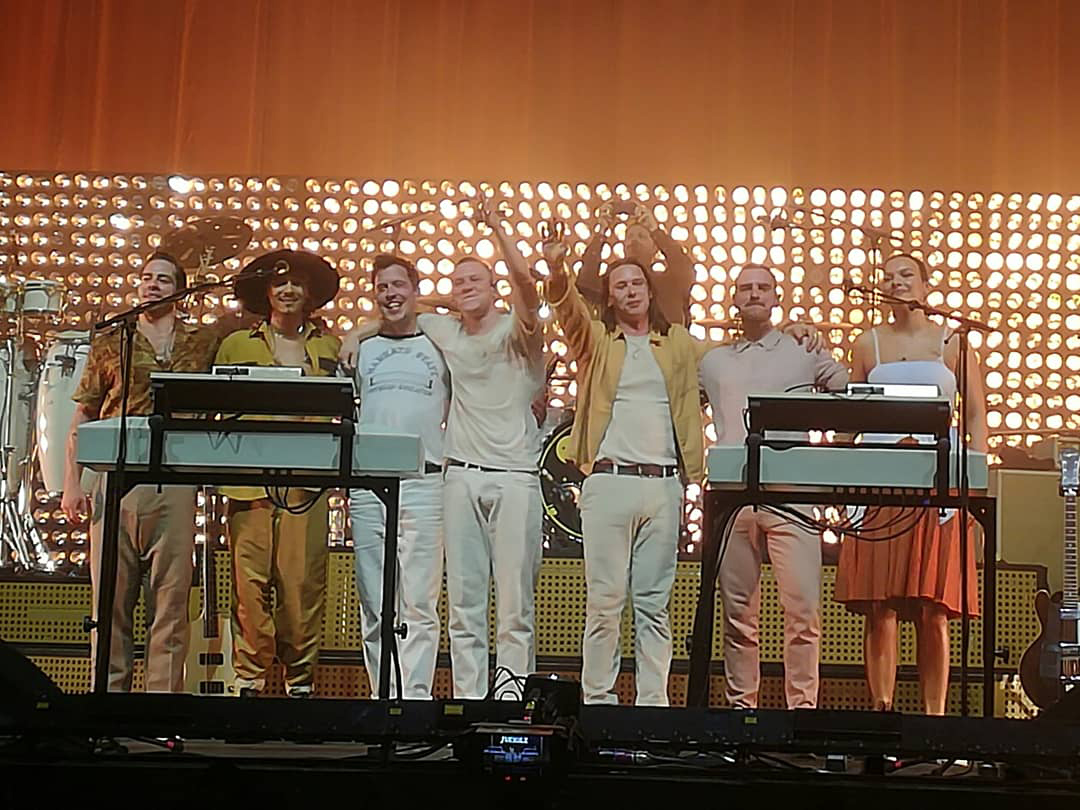 Sidesters Rudi Salmon and Andro Cowperthwaite move and sing with the laconic grace that’s become their trademark, and frontmen Josh Lloyd-Watson and Tom McFarland, resplendent in white tracksuits, conduct their aural storm with blood-raising verve. McFarland wears a bemused grin, almost unable to take in the ten thousand fists raised for his music. Lloyd-Watson, by contrast, has the rock-star shapes to match his hair, and indulges in some stage-lip crowd-baiting for good measure.

In the midst of this formidable storm, the real magic of a Jungle show is this: that songs as sonically gorgeous as ‘Heavy, California’ and ‘Busy Earnin’’ are given more life, not curtailed, when their creators set them free on stage. There are very few artists who can truly manage that. Make sure you don’t miss them next time they come around – in full flight, Jungle are a true gift.

Jungle release two new singles – how do they stack up to the classics?