Well. It had to happen eventually, right? With Iron Fist, the ‘Marvel on Netflix’ universe (it’s not as catchy as the ‘MCU’ film universe abbreviation) reaches its fifth season of programming in almost exactly two years (the first season of Daredevil aired in April 2015). What’s more, Iron Fist is the fourth ‘origin’ in those five seasons. Even then, the exception to that rule – Daredevil season two – was a backdoor pilot of sorts for Elektra Natchios and Frank Castle; the latter will anchor The Punisher towards the end of this year, while the former is the fifth ‘main cast’ member on the upcoming Defenders crossover, alongside the four heroes.

The point of all this talk of origins and new characters is that perhaps a series as abject as Iron Fist was due round about now. There are only so many variations on the superhero origin story you can do, and those variations narrow considerably when they all have to be set in New York, and have to be on a small enough scale to not need to involve the Avengers. There’s an argument that says that Iron Fist suffers because it’s painted into a corner by being the last of the Defenders origins to air. Alternatively, there’s the argument that I prefer: that Iron Fist suffers because it’s a fucking disaster of it’s own making.

The central issue of cultural appropriation is what everyone will know and be talking about, with good reason. The character of Danny Rand is one rooted in Orientalism as prescribed by Edward Said, a white male saviour harnessing the ‘exotic Eastern powers’ better than any of the locals. Casting an Asian-American as the lead would still have had the issue of an American male saviour, but it would’ve been a major step in the right direction, not least in exemplifying diverse casting. As it is, by casting Finn Jones, Marvel showed that the issue many have pointed out, wasn’t an issue to them, and perpetuated the tropes of the source material. 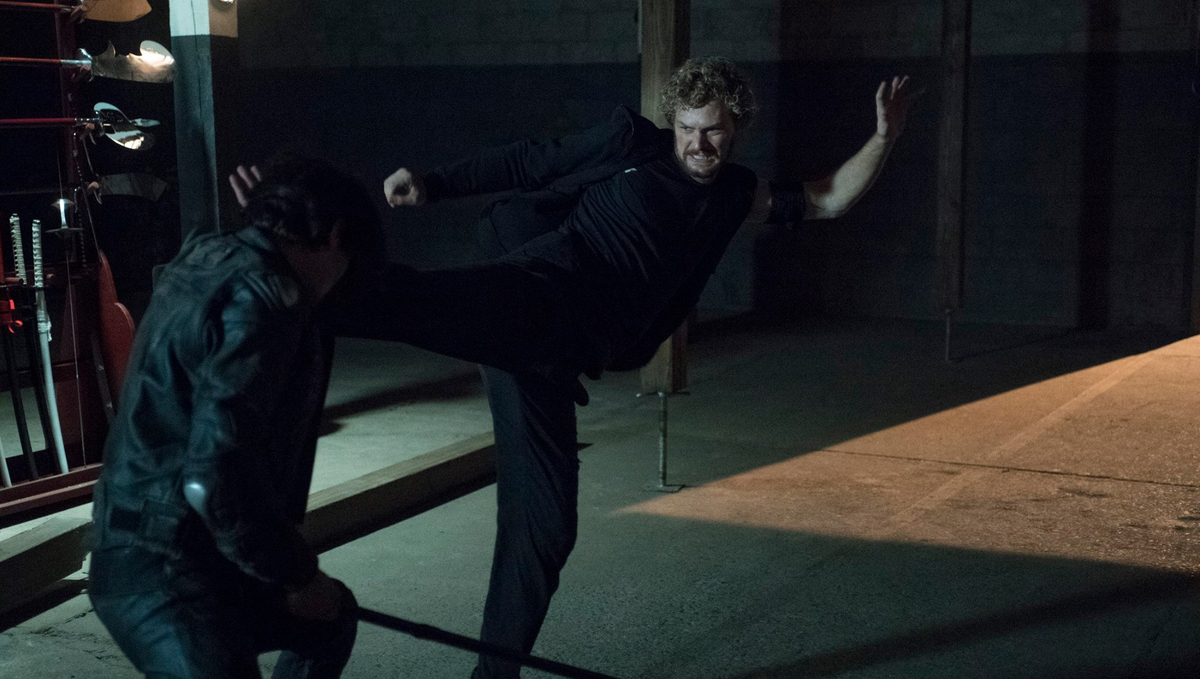 This alone would be enough to cripple the show, but that’s not it: there are problems everywhere. Not only is Rand a white male saviour, but he’s also a billionaire, white male saviour, and the show displays as much ignorance on that front as it does in terms of culture. “It’s not about the money” is the kind of thing only a character like Danny Rand can truly say. About a minute after saying that, he’s gifted a penthouse apartment to alleviate his brief homelessness.

Later in the season, Ramon Rodriguez’s not-the-bad-Hand-but-the-good-Hand-but-really-the-bad-Hand boss, Bakuto, tells Danny that he too is one of the marginalised people in society. When Danny (accurately, for once), responds by noting that “I’m a billionaire”, Bakuto asks him “Is that how you feel, inside?”. It’s as ridiculous as the way Danny wears white trainers with his suit, which has to be up there with the most unsubtle ‘costume as character’ hints on television. He’s not one of them, guys! He doesn’t wear smart shoes! His tie is loosened! He’s kind to all the little people!

With Danny veering constantly between unhinged maniac and the kind of ‘nice guy’ plucked straight from Tinder, there is a vacuum of audience empathy. It’s hard to find a character to side with anywhere on the show. Colleen Wing’s (Jessica Henwick) candidacy collapses with the reveal of her being raised by the Hand (but it’s the good Hand). Claire (Rosario Dawson) is a far less interesting character here than on any of the previous Marvel shows; the fact that Luke Cage-Claire was the best Claire means this pales in comparison. Joy Meachum (Jessica Stroup) goes from ‘still a good person’ billionaire to, by the end, plotting with Davos to kill Danny. Harold Meachum (David Wenham) is an undying psychopath, so he’s obviously off the list. 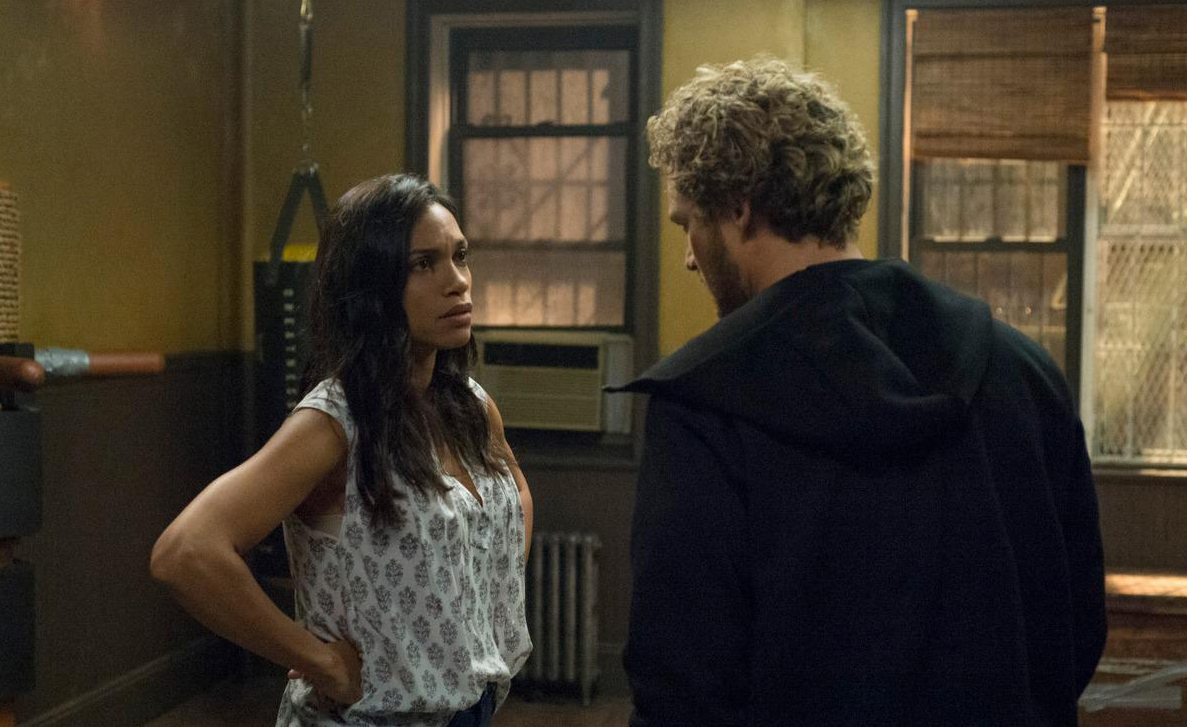 Weirdly, the closest thing I found to an audience proxy was Ward Meachum (Tom Pelphrey), mainly because his default characteristic is incredulity. Every episode sees his bafflement reach new heights, matching the reaction of the majority of the viewing audience. Of course, he too is a ridiculous character in certain ways – he goes from ‘trust fund’ childhood bully turned adult bully, to sympathetic hero for no reason other than the plot needs him to – but the abuse he suffers from Harold through the first half of the season is one of the more interesting and well executed elements of the show. By which I mean, it’s pretty much the only remotely interesting part.

Even if you play devil’s advocate to the issues about the show (and I’m sure some viewers certainly will), it’s still awful when compared to the basic elements of the previous Marvel shows. Danny’s power defines him in a way that simply can’t be said about Matt Murdoch, Jessica Jones or Luke Cage. Danny Rand literally is the Iron Fist. It’s not a choice, and none of the choices he makes throughout are really not in his favour. He tries to get back his company. Then he tries to get revenge against whoever killed his parents. The other three really felt like there was more to their goals than self-preservation – with Rand, the only people involved in his storyline are essentially those who he involves because he needs them.

In the villain department, where Daredevil had Wilson Fisk, Jessica Jones had Kilgrave and Luke Cage had Cottonmouth (yes, and Diamondback), Iron Fist has Harold Meachum, Madame Gao (Wai Ching Ho) and Bakuto. The first three were written to be the hero of their own story; you could see watching how wrong they were, but their motivations made them great characters. The three of Iron Fist, meanwhile, fall short of this. Meachum is set up to be the tragic villain, trying to protect his family while corrupted by his reanimation, but he’s also a character who long before the show’s narrative is responsible for the death of Danny’s parents, and who has always planned to have Danny dead. Gao is a villain who revels in being the villain; a great supporting character, sure, but hardly someone you could ever root for. 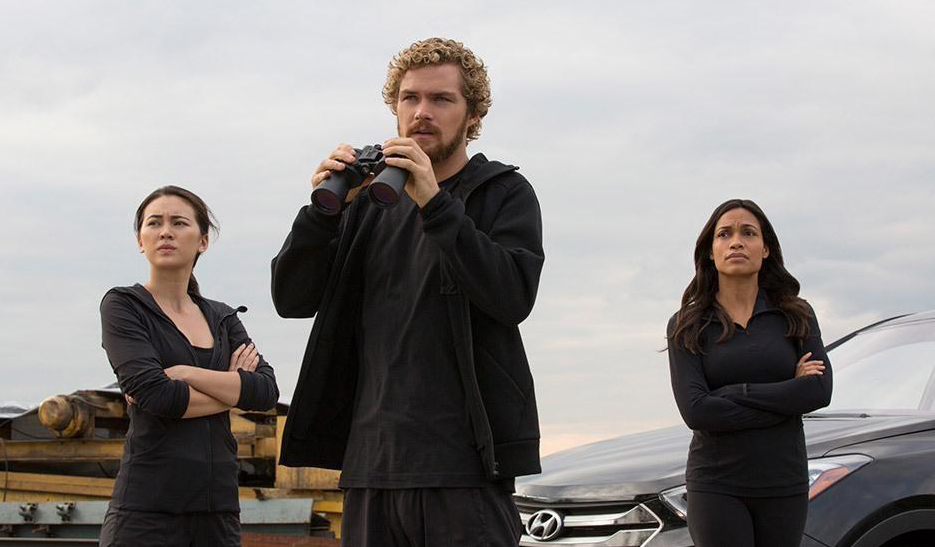 Bakuto, meanwhile, is victim to the show’s heavy-handedness of plotting. Where most shows employ ‘Chekov’s Gun’ – introducing seemingly minor points that become crucial later – Iron Fist settles for Chekov’s Nuke, hinting at what’s going to happen in great big flashing neon letters. Bakuto is so obviously a villain from his first appearance, and the idea that there’s a good faction of the Hand is so stupid that even the show gets characters to ridicule it. Why not call it the Arm, asks Claire at one point? Why are they the Hand at all, I ask at every point? If there’s meant to be some ambiguity as to whether he’s good or bad, then that ambiguity fell flat on its face when he represents a wing of the guys who were last seen outside of Iron Fist preparing to resurrect Elektra as the ‘Black Sky’ in Daredevil season two. If he first seems like an obvious villain, and then it turns out that, yes, he is in fact a one-dimensional villain, it’s hardly much of an arc.

Apart from anything, where on earth does this leave us for The Defenders? The ending of Luke Cage was cliff-hanger enough to leave me wondering how he’ll get back to New York. Iron Fist leaves Danny and Colleen in the Himalayas wondering where the Seventh Capital City of Heaven has disappeared to. I’m sure that Sigourney Weaver’s villain in The Defenders is significant, but is it Seventh-Capital-of-Heaven-gone significant? Or are Danny and Colleen just going to shrug and head back to New York?

Inexplicably, Iron Fist stretches to breaking point to avoid actually naming the other Defenders. Obviously, there’s the whole business model of appealing to those who haven’t seen the other TV series, but when this is the last stop before we reach The Defenders, there does have to be some continuity. Having Luke Cage in Jessica Jones worked brilliantly, and helped his solo show too. Wouldn’t it have made sense for Claire to call Matt Murdoch and get him involved in a fight against the Hand, given that the entire point of the Chaste, Stick’s organisation, is also to defeat the Hand? The lack of logic is just tiring, which is an unfortunate feeling to have leading into the big crossover.

At this point in the mythology, we should all be feeling giddy with excitement, having just seen the final piece fall into place before the miniseries team-up. Instead, Iron Fist represents a catastrophic misstep for Marvel.