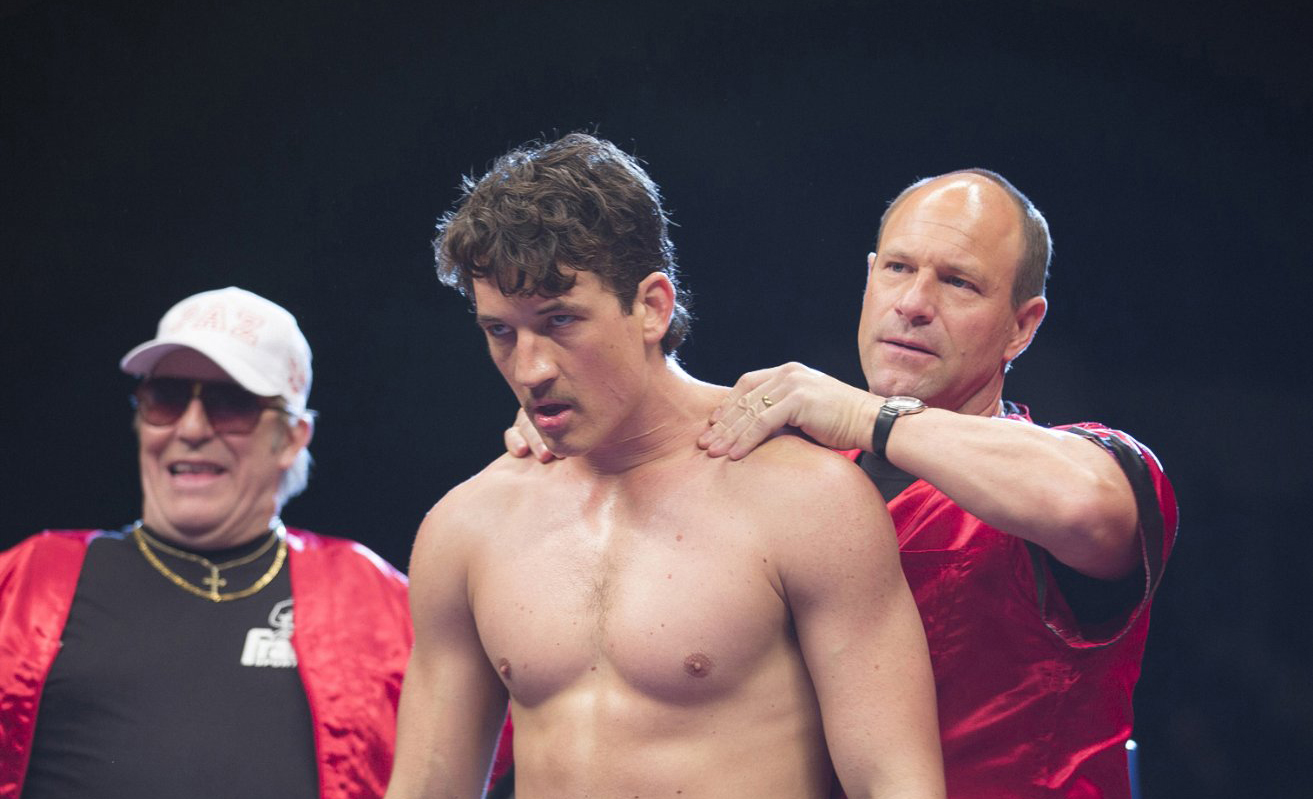 Miles Teller, as professional boxer Vinny Paz, in Bleed for This, makes sense. His brutal performance in Damien Chazelle’s Whiplash portrayed his drummer as a sort of athlete, preparing to go into battle with J.K. Simmons’ aggressive conductor. Bleed for This, depicting a boxer who, unexpectedly, had to retrain to become a champion shares a similar attitude to Whiplash. Unfortunately, Ben Younger’s boxing drama fails to pick up the momentum needed to hit us where it hurts. Instead, it plods along with characters that aren’t fleshed out, reducing a potentially-engaging story to a disposable yarn (and even that struggles to pull at our heart strings).

Vinny (Teller) is a lightweight boxer. He’s cocky and confident. Though he loses his WBC World Light Welterweight title in the opening fight, his ambition and drive is what thrusts him forward once again. Kevin Rooney (Aaron Eckhart), a man who coached Tyson back in the day, is down on his luck. The reason Pazienza and Rooney were brought together is not due to confidence in their relationship, but more of a way to put the two “out to pasture”, as Kev says – of course, managers still make money on big fights, whether the boxer wins or loses.

Their relationship is slowly built, in part due to Rooney’s unconventional decision to train Pazienza two weights higher than before. It’s a risky move, and Pazienza’s father (Ciarán Hinds) – his previous coach – disagrees with the decision. But Vinny trusts Rooney and, after a successful match, they become a stronger force, prepared to be more successful than Vinny ever dreamed of. Then, disaster strikes. 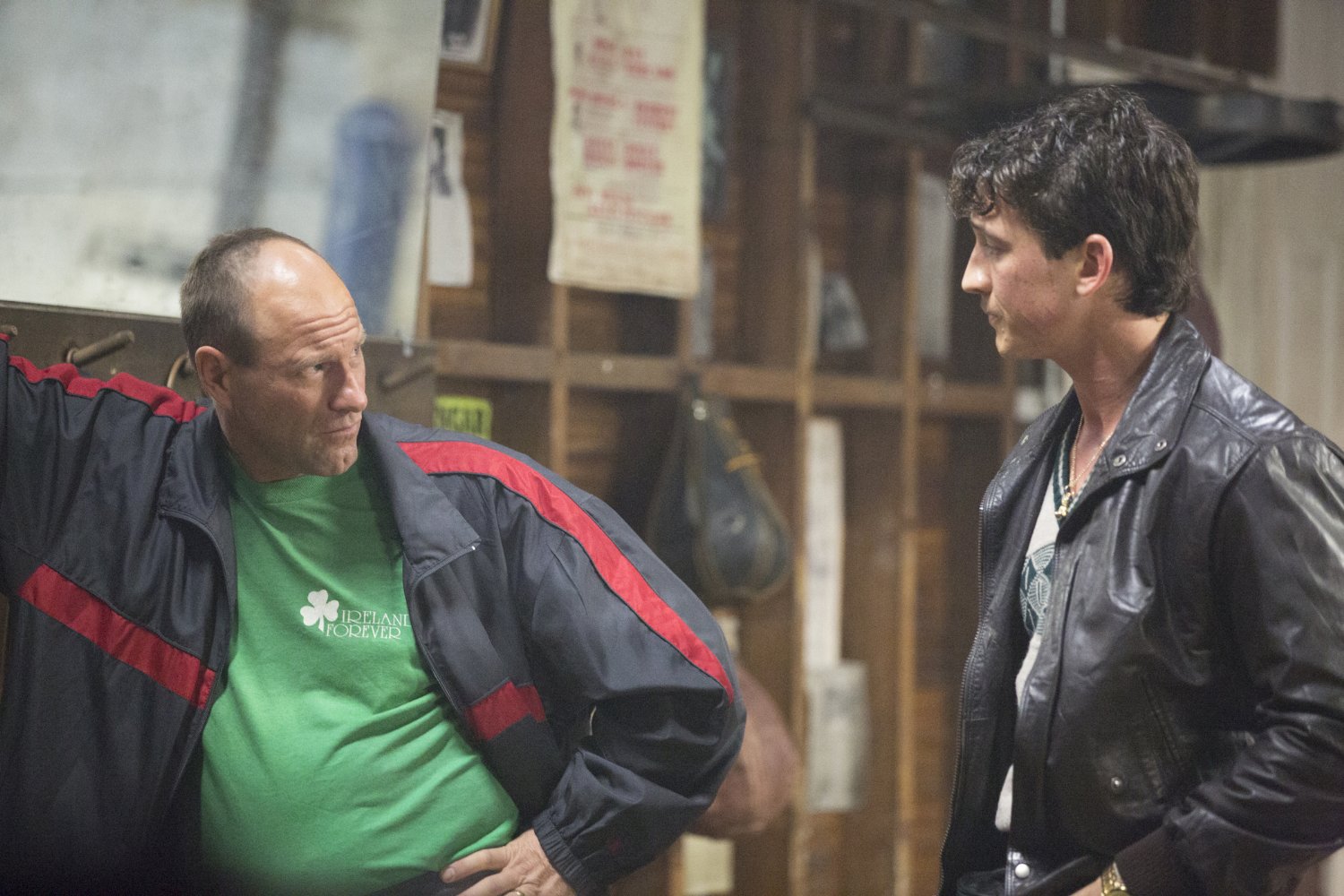 Miles Teller does have a similar look to Stallone. A dark-haired complexion and a hang-dog look; Teller’s scars arguably give him an edge of brute force that Stallone’s baby-faced Rocky Balboa never had. Pazienza, with his penchant for strip clubs, gambling and arm-candy girlfriends, clearly struggles to keep a heart at all, but Bleed for This manages to build a complex persona that we aren’t unequivocally rooting for. Pazienza could succeed or fail, and either outcome would be realistic and tell a different story. But it’s those that surround him that are difficult to watch.

Pazienza’s father, who’s alluded to as a cheater to his wife, isn’t explicitly explored and we’re unsure whether we should feel sorry for him or see through the tacky glasses and cheap hair-dye that covers such a money-hungry man. Aaron Eckhart, giving a powerful performance as Paz’s loyal coach, equally struggles to know how to access his character; is he a raging drunk with a has-been demon hanging over his head? Or is he a man committed to reforming his life and ensuring success for Pazienza? It’s not nuance when there’s such a lack of clarity as to where to stand.

Bleed for This clearly aimed to be among the Oscar-contenders this year, following on the heels of The Fighter in 2010. Indeed, boxing movies often sneak into awards ceremonies with notable Best Picture Oscar wins by Million Dollar Baby in 2005 and Rocky in 1977. But Bleed for This takes itself too seriously, dragging out scenes for too long and letting characters stew in a silence that’s unearned. 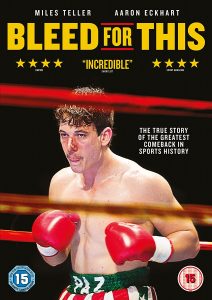 Bleed for This could’ve been a combination of Rocky and Asif Kapadia’s Amy, as those who care for Pazienza – his father, his manager and, to some extent, his coach – leech off Pazienza’s drive. As a documentary, Amy depicted family and friends who took advantage of Winehouse’s celebrity and health issues, leading to her untimely death in 2011. Bleed for This, on the other hand, can’t get away from the obvious hero story that we’ve all seen so often. Strangely, the film lacks the punch to make it memorable and, in time, it’ll be lost in the dearth of awards-contenders that simply weren’t good enough to even make a mark.

Bleed for This hits Blu-ray, DVD and Digital Platforms on 27 March, 2017 courtesy of Icon Film Distribution