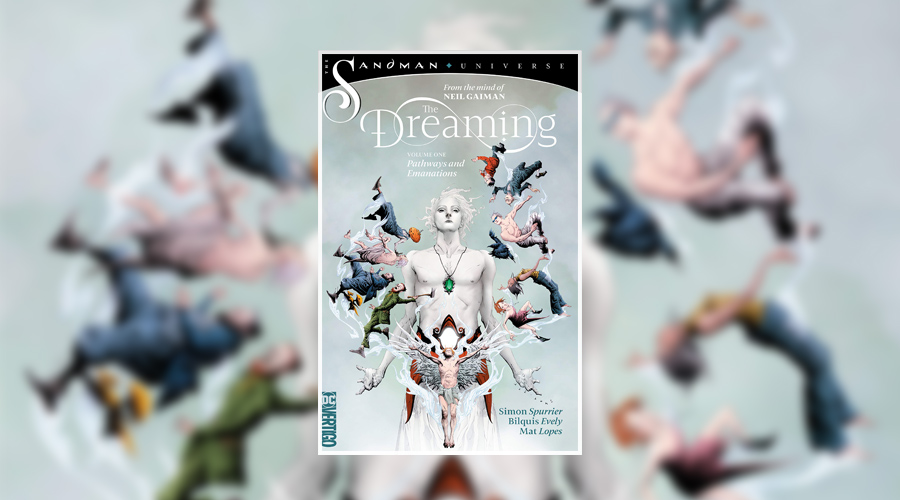 The Dreaming is one of a line of graphic novels spun from Neil Gaiman’s The Sandman. This developing universe includes the realm, The Dreaming, inhabited by storytellers who maintain the world, acting as wardens for dreamers and all manner of stories – from books never written to boogeymen of history. In this first volume, the Lord of Dreams has vanished, his people can’t find him and their world begins to literally crack apart.

A colourful cast of characters – namely the Librarian, Merv Pumpkinhead, Dora the mysterious Monstress, M the raven, the latest Eve, Cain and Abel – all work together and independently to play their part in the maintenance and repair of The Dreaming during its time of upheaval.

Author Simon Spurrier and artist Bilquis Evely craft a visually impressive, twisted story. It’s reminiscent of DC’s Doom Patrol in its offbeat, art history aware conceptual and philosophical vision of this magical realm. The artwork is highly detailed with sharp lines that create impactful action that is striking in its more horror inducing moments. Similarly, the words on the page are linguistic tongue twisters, full of poetic alliteration that emphasises that this is a place full of storytellers.

Volume One is the first arc in this tale of The Dreaming and it is a downward spiral. The predictable, solid life of the storytellers takes increasingly darker and weirder turns in each issue. This isn’t about using hope to triumph, but rather the grind that brings hopelessness. At least until we reach the turning point.

Where The Dreaming is at its best is when it weaves a narrative around a particular character and allows us to get to know them better. Certainly, fans of grumbling but earnest Merv will appreciate his say-it-as-it-is complaints about his fellow storytellers. Those who appreciate a female character with edge will take to Dora who is at once flighty and selfish but determined and honest in a way others aren’t. For those who love world building and mythos, the host of background characters – including the wyvern and sphinx guards – and dream concepts, such as how The Dreaming deals with lucid dreamers, will excite and raise even more questions about the mechanics of a world built on curious foundations.

At times, the wordsmithery of the dialogue can be overwhelming and feel complicated, yet this is often balanced out by the sheer number of straight talking characters. It is perhaps done this way so that readers don’t feel the leaning too much into Shakespearian speech or absent of the high art thinking that would inevitably result from the stories of a universe full of creatives.

Action, mystery, big ideas and concepts as creatures are all what powers The Dreaming and the combined efforts of Spurrier, Evely and Mat Lopes make it a compelling and interesting read for older teens and adults alike.