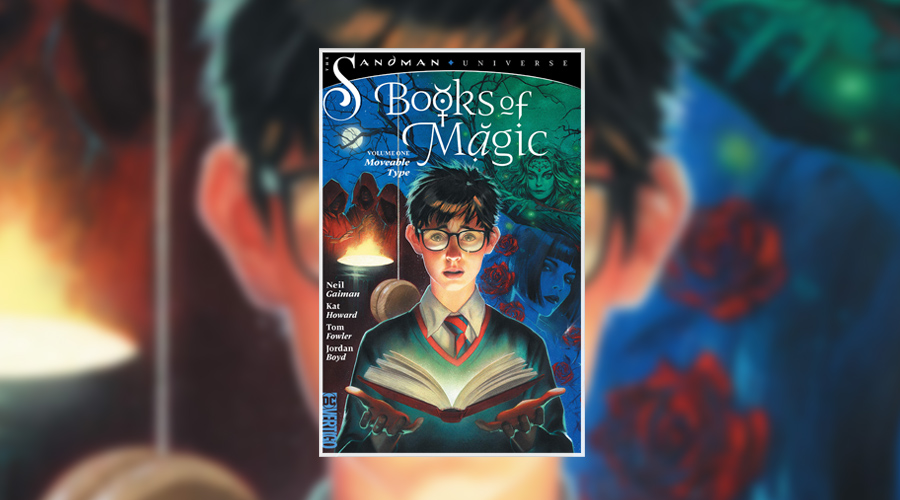 Why you should be watching Pennyworth

The Sandman Universe is a new world of stories of which Books Of Magic is just one part. Based on Neil Gaiman’s creations, writer Kat Howard and illustrator Tom Fowler explore the mundane and magical life of Timothy Hunter, a boy who is ‘destined to be the world’s most powerful magician’, if he can navigate his teenage life with school, family and a few bad guys who seem to be on the hunt for him.

With colours by Jordan Boyd and letters by Todd Klein, this first volume collects the first six issues of Books of Magic with The Sandman Universe Special #1, which leads the book. This is both a blessing and a curse as The Sandman Universe is a colourful and intriguing world that’s bursting with strange people, magical creatures and a unique point of view – a raven, who traverses between worlds. It offers a wonderful setting that the rest of Books of Magic doesn’t quite align with.

The art, especially in the magical realm, has bright and bold colouring. It has the appearance of more classic comic book stories: jagged lines and an almost oil painting effect; a contrast to the smooth curves and digital cleanness of many modern comics. This does lend a sense of history to the places being shown and it matches with the depictions of literary and historical characters. But as the story moves into the “real” world, the non-magical one, all that depth becomes grey and lacklustre. It’s a grim world to be in and it leaves the story feeling dull.

Then there’s the lead character, Timothy, a frustrating and frankly unlikable protagonist who isn’t compelling in the slightest. Perhaps it’s because he’s frustrated with his inability to use his powers, or that there aren’t any engaging supporting characters who don’t feel one note. Or it could be that the art style has an exaggerated quality that makes Timothy’s every expression seem twisted and uncomfortable. Put these negative aspects together and it all feels very unappealing. It’s Timothy’s story and with all these issues, it’s difficult to want to learn more about him or his story.

This book won’t be for everyone, naturally, and there’s something to be said for its origins and the audience that might appeal to. Considering this comes, at least originally, from the mind of Neil Gaiman, fans of American Gods and the like may find that the ordinary, ground-level look at magic is compelling enough. But if you’re looking for grandeur and spectacle, you’re out of luck. There are elements of the absurd, which are fun and offer a warped view that’s akin to Doom Patrol – a series which has a moving street as a character. Yet it never quite veers fully into one style or another, neither gritty nor absurd, only giving you a unfulfilling taste of each.

Going back to the characters – there’s aching familiarity in almost every part, which one can recognise as difficult to avoid seeing as the boy wizard, secret magical world, evil teacher elements have really saturated popular culture for young adults and children, mostly in the past twenty years. Ignoring the simplistic view that the character looks like Harry Potter with square glasses and a pet white owl, Tim has to confront Ms Rose, a new teacher who practically has “I’m up to nefarious things!” stamped on her head and who is supposed to be the wisdom balancing Tim’s lack of knowledge, but it just feels hollow. As do Tim’s wild reactions to situations. He’s unhinged and the reasoning might be sound but the execution doesn’t allow it to resonate.

The mystical Dreamland world that we’re offered in the first issue of The Sandman Universe has more originality and that works well for it, but the rest of the comic doesn’t grab you and hold your attention. There’s certainly potential for some interesting stories to be told within this world, but Volume 1: Moveable Type isn’t it.

Books of Magic Volume 1: Moveable Type was published by DC Comics on 16 July 2019

Why you should be watching Pennyworth