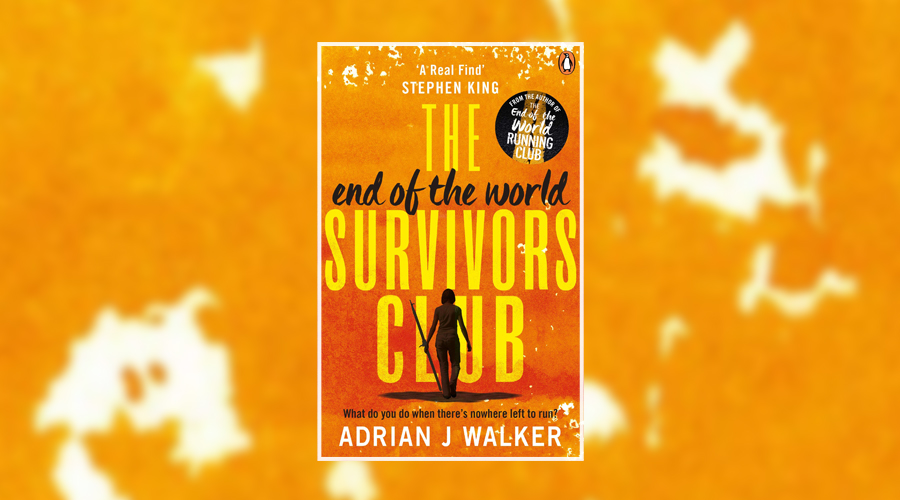 It’s over a year since I read Adrian J Walker’s The End of the World Running Club and no other post-apocalyptic book has stuck with me as much as this one did, frequently popping up in bookish conversations about the end of the world (because when real life news is this bleak, talk naturally turns to the apocalypse). The smaller plot points might have slipped from my memory over the past twelve months but within just a couple of chapters of Walker’s sequel, The End of the World Survivors Club, I was right back with his characters as they struggled to survive and find a way to live in a world that’s been decimated.

Whilst Running Club centered on disenchanted father and husband Ed Hill as he ran over 500 miles in search of his family, Survivors Club focuses on Beth, Ed’s wife, as she embarks on her own battle to keep her children safe. Having made it to the rescue ship that will take them to a rumoured safe haven in America, Beth doesn’t waste any time on mourning her husband who got left behind in Cornwall. She survived the apocalypse with her baby and toddler; she didn’t need her husband then and she still believes she doesn’t need him now. Having been separated from Ed for all of Running Club, Beth has no idea what he endured and the dire lengths he went to in order to reach his family. She’s reluctant to consider he might have changed and that says more about Beth than it does her husband.

The world is still a dangerous place and it’s when Beth starts to relax, letting her well-built guard down, that catastrophe strikes again. It’s the first tragedy in what turns out to be blow after calamitous blow for Beth and her fellow survivors including Bryce and Richard – who helped Ed on his mission in Running Club and managed to get aboard the ship when Ed didn’t. With her children stolen from her and their safe passage across the Atlantic dissolving into a disaster of Titanic proportions, Beth sets out on a brutal, treacherous journey to rescue the two most important people in her life. This is an unfamiliar world without laws and without any kind of civilised structure. Half the land that once existed is now submerged under water but that’s the least of Beth’s trouble with dangerous criminals, opportunistic psychopaths and volatile weather conditions standing in the way of her finding her children.

“Despite the mist’s cocoon and the untroubled sea and our quiet voices, my insides were shifting like molten lava, and my stomach heaved with that same repeated reality: I had been separated from my children, and the best I could hope for was that it was only by a mere ocean.”

The End of the World Survivors Club is, above all else, a tale of motherhood. The fierceness and fearlessness that courses through Beth as she chases after the woman that stole her children is akin to a lioness protecting her cubs. There’s absolutely nothing Beth wouldn’t do for Alice and Arthur; she would walk through fire, take a thousand bullets, and in the case of this story, she’ll journey to the end of the earth to find them. Beth thinks she cares more about her family than Ed does but readers of Running Club know differently. We’re able to compare Ed and Beth’s stories, to see the contrasts and similarities in their struggles, to watch them both suffer and evolve. Their paths might have separated them as a couple and taken them to different places, both geographically and emotionally, but their raison d’etre is exactly the same: family.

Running Club had a solid, satisfactory ending. It wasn’t neatly tied up with a bow but it gave our protagonist his redemption and, after such an exhausting journey, that felt like enough. However, Walker’s choice to continue Ed and Beth’s story is one I welcomed with open arms. As a woman and a mother, Beth’s POV is very different from Ed’s but she’s an equally flawed character, as all humans are. She veers between anger and apathy towards her marriage and it influences her actions. Her refusal to believe in Ed is deep-rooted and frustrating but completely understandable given how useless and unhappy he was when the apocalypse rained down on them. The circumstances and perspectives have altered but Survivors Club is just as much a tale of redemption and realisation as Running Club was.

Walker’s writing is supercharged with adrenaline-fuelled action and breathless thrills that would rival the most heart-pounding big budget disaster movie. At points it feels as if nothing is ever going to go right for Beth but she’s a character who doesn’t know when to quit, which means that the story never feels completely devoid of hope, even when the future looks tremendously bleak – which it does, a lot. Walker gives readers characters to believe in and a new – albeit terrifyingly broken – world to root for. Yet a world that’s been broken offers its own kind of optimism; it can be rebuilt, and so too can relationships that before the apocalypse appeared to be unfixable.

The End of the World Survivors Club is another exceptional read from Adrian J Walker – one that will have you laughing one moment, crying the next and holding your breath through each unpredictable chapter. Featuring a villain to give The Walking Dead’s Negan a run for his money, this is one post-apocalyptic sequel that doesn’t disappoint.